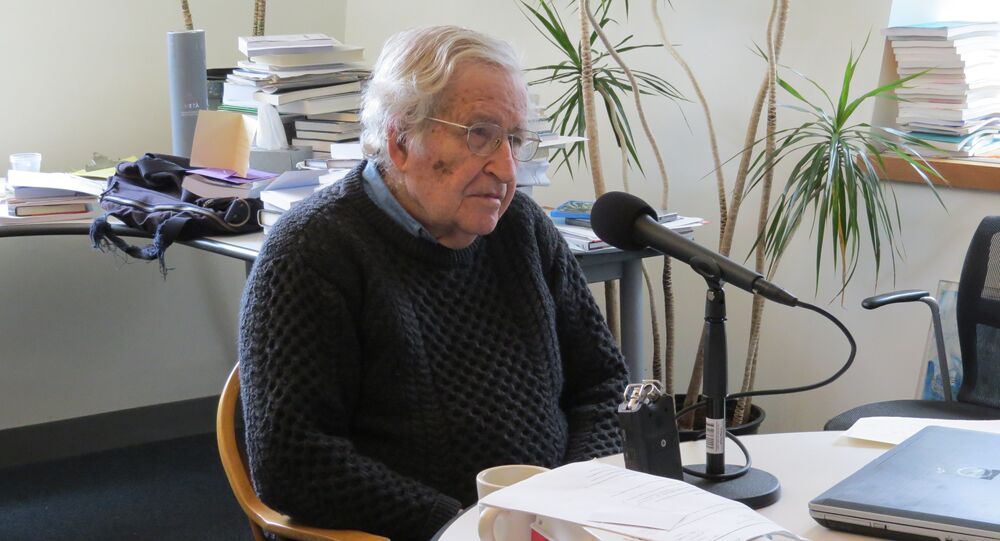 The US invasion of Iraq in 2003 and Washington's subsequent strategy in the country and the Middle East has brought Daesh to life, renowned philosopher and linguist Noam Chomsky told Radio Sputnik in an exclusive interview.

The campaign "among its other crimes" instigated "the sectarian conflict and the atrocities out of which finally came this particular monstrosity," the professor said, referring to Daesh.

"If it is simply destroyed – as it could be by force without dealing with the roots of it – something even worse will probably come up. You cannot just say, 'OK, I don't like this guy, let's kill him,' without asking what happens next. Every serious analyst has pointed out that if you kill some terrorist leader or destroy some terrorist group without looking at the roots of where they came from, you are going to get someone worse. It's happened consistently over the years," the US intellectual observed.

© Flickr / The U.S. Army
A U.S. Army Soldier from the 3rd Squadron, 2nd Stryker Cavalry Regiment conceals himself with smoke Oct. 18, 2007, after one of his regiment\'s vehicles was hit by an improvised explosive device in Baghdad, Iraq.

US policymakers have apparently so far failed to learn from history. The so-called War on Terror serves as a fine example. Then President George W. Bush launched the military campaign in 2001 following the September 11 attacks in the US.

"At that time what they called terrorists was located in a small remote tribal area of Afghanistan. Where is it now? All over the world," Chomsky noted. "Every time you hit a system with a sledgehammer, you make it worse."

© AP Photo / Maya Alleruzzo, File
The ‘Kill-Box’: How the Pentagon Uses Outdated Tactics to Justify Killing People
Many hoped that Washington's policies would take a turn for the better when Barack Obama came to power on the promise of lesser US military engagement in the world, particularly the Middle East. Chomsky referred to Obama's pledges as "nice rhetoric," but maintains that the policies he was advocating at the time "were pretty ugly."

The intellectual also chastised Obama for the real reason for opposing the 2003 US invasion of Iraq.

Obama "says he opposed it because it was a strategic blunder, not because it's wrong to invade another country and violate international law radically. But smash up the country, destroy it, kill hundreds of thousands of people, generate millions of refugees, ignite a sectarian conflict, which did not exist before and which is now tearing the country and the region apart – that's not the reason to object to it, rather because it was a blunder."

The implications of Washington's war in Iraq are part of a larger pattern. "Iraq is one case, Libya is another," Chomsky observed.

You can listen to the first part of Sputnik's exclusive two-part interview with Dr. Chomsky here. The second part is available here.