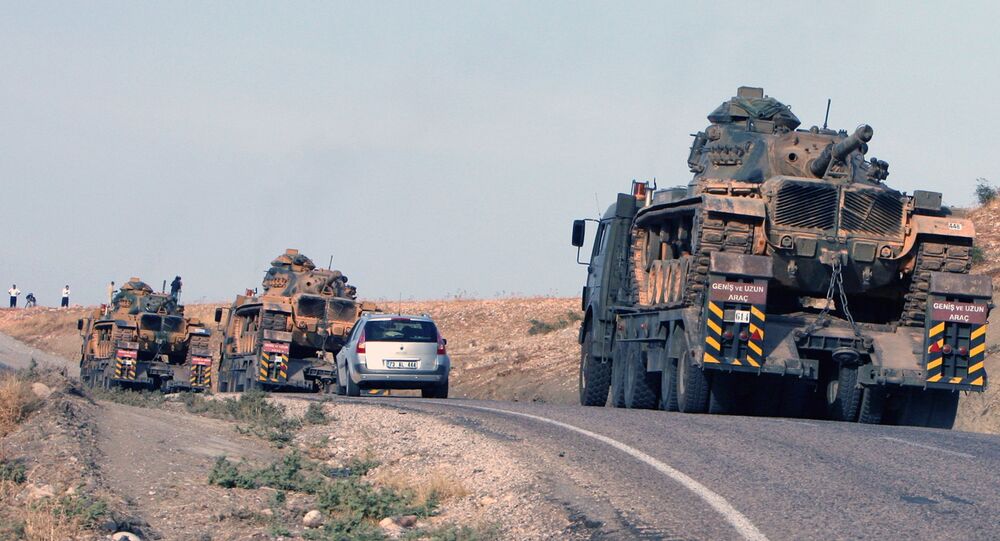 A retired US Army Colonel told Sputnik that Turkey could use its assembling forces to intervene in Syria, wrecking the fragile US-Russia negotiated ceasefire and setting off a wider war.

© AFP 2021 / YASIN AKGUL
‘Turkey is in the Middle of a Tornado and Its Epicenter is Quite Near’
WASHINGTON (Sputnik) — Turkey’s military is assembling forces it could use to intervene in Syria, wrecking the fragile US-Russia negotiated ceasefire and setting off a wider war, retired US Army Colonel Doug Macgregor told Sputnik.

Lieutenant General Sergei Kuralenko, the commander of the Russian center on reconciliation in Syria, expressed the same concerns about the Turkish buildup to reporters at the Hmeimim airbase near Latakia in Syria on Monday.

Kuralenko confirmed the deployment of reinforcements, including armed vehicles by Turkey on the Syrian border, and he too expressed concern that such moves could lead to the derailment of the fragile three-day-old truce in Syria.

Macgregor agreed that the ceasefire could still be derailed or sabotaged.

"I am not sure this arrangement is more than a temporary respite from the fighting," he said.

Wider conflicts in the region such as Turkey’s continuing feud with its more than 20-million-strong Kurdish minority, or the growing enmity between Sunni and Shia Muslim states and communities in the region, posed long-term, structural threats to the Syrian peace deal, he noted.

"We are at the beginning, not the end of the fighting in the Levant and Mesopotamia," Macgregor cautioned.

Doug Macgregor holds a Ph.D. in international relations from the US Military Academy at West Point and in addition to his practical experience he is also a military historian. He commanded the US armored forces in the Battle of 73 Easting in the 1991 Gulf War, the largest US tank victory since World War II.