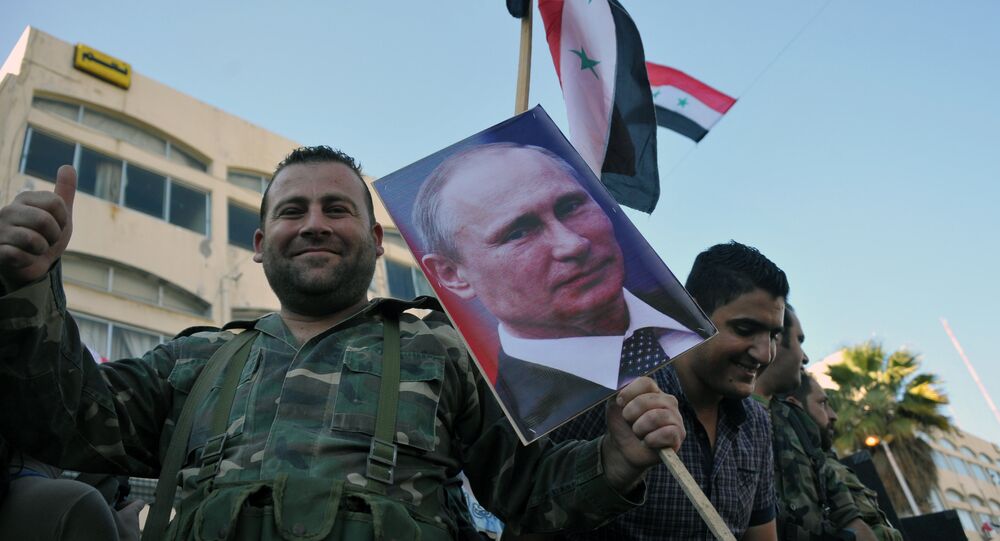 The Syria ceasefire agreement concluded between Washington and Moscow does not bring an end to the war, and yet this is a huge victory for Russia, The Saker writes, adding that it is now fair to say that the Russian approach toward Syrian affairs "has won."

© AP Photo / Militant Website, File
Daesh Terrorists: A Multifunction Tool in Hands of Ankara, Riyadh, NATO
On February 22 Russia and the United States reached a compromise on the Syrian ceasefire. The agreement is due to come into force on February 27.

The deal envisages however, that the parties on the ground will continue their fight against Daesh, al-Nusra Front and al-Qaeda affiliated groups.

In the recent interview with Radio Sputnik Larry Johnson, retired CIA intelligence officer and State Department official, said that he is "not optimistic" about the upcoming 'cessation of hostilities.'

"The Syrian army with the backing of Russia and Iran is operating very effectively and retaking significant swats of territory from the terrorists and pushing them towards Turkey. I don't see why Syria would go for the ceasefire now when the situation is working out to their advantage," Johnson told Sputnik.

However, The Saker, an anonymous US military analyst, does not share such a stance. He believes that the agreement is a huge victory for Russia.

"The recent agreement between the USA and Russia really solves nothing, it does not even end the war, and both sides are expressing a great deal of caution about its future implementation.  And yet, this is a huge victory for Russia. While it is too early to say that 'the Russians won in Syria,' I think that it is now fair to say that the Russian position on Syria has won," The Saker writes in his analysis for The Unz Review.

© AP Photo / Francois Mori
In Hussein's Footsteps? Erdogan is Walking Straight Into Washington's Trap
Firstly, there are no more claims that Damascus should be taken over and Bashar al-Assad ousted, The Saker notes, adding that it means that everybody has recognized that the Syrian Arab Republic has repelled the aggression of the Western coalition created to topple the legitimate Syrian leader.

The "Assad must go" rhetoric has become a thing of the past, whether Hillary Clinton likes it or not.

Secondly, the UN Security Council and the US have been forced to ultimately separate the wheat from the chaff and admit that the vast majority of Islamists fighting against Bashar al-Assad are by no means "moderates."

I can't put my finger on exactly when US foreign policy pundits decided al-Qaeda really isn't so bad & we might even represent it in talks.

​"If you look at the organizations which the UNSC has already declared as 'terrorists' then you already have an absolute majority of the anti-Assad forces," the military analyst stresses.

It means that the moral legitimacy of the anti-Assad forces lies in tatters, he underscores.

© AFP 2021 / ARIS MESSINIS
Turkish soldiers on a tank sit opposite the Syrian town of Ain al-Arab, known as Kobane by the Kurds, at the Turkish-Syrian border in the southeastern Turkish village of Mursitpinar, Sanliurfa province (File)

Thirdly, regardless of Recep Tayyip Erdogan's warmongering stance, it has already become clear that neither NATO nor even the Turkish military command want to unleash a war against Russia's forces in Syria.

"Erdogan's gamble has not paid off and that his entire Syria policy is now comprehensively dead," the analyst emphasizes, adding that now the Turkish leader is being regarded as a troublemaker by the international community.

Furthermore, the 'no-fly zone' agenda championed by Erdogan and US neocons is not relevant anymore. The ceasefire agreement states clearly that anybody not respecting the deal is a legitimate target for destruction.

"Fifth: the USA had to accept the humiliation of having to agree to all of the Russian terms for the current ceasefire. Yes, of course, the US can, and probably will, try to renege on part, or all, of this agreement, but the precedent has been set and it will be very hard, if not impossible, for the US to openly return to the pre-2016 policies," The Saker continues.

© AFP 2021 / Fayez Nureldine
Turkish-Saudi Boots in Syria: Who Stands to Gain the Most From Invasion?
While in the beginning of the Russian air campaign in Syria the Pentagon firmly refused to share intelligence information with the Russians, now Moscow and Washington are working together on the map to designate where the participants of the ceasefire are located and where those who have not been included in the deal are being deployed.

Moreover, incredible as it may seem Russia has engaged the so-called "Free Syrian Army" in their military fold.

"How? By basically forcing every single faction in Syria to choose between one of two possible statuses: being a 'terrorist' (and a fair target for destruction) or being a participant in a political process," the analyst explains, adding that Russia is opening a "Truce Center" at the Hmeymim airbase.

In addition, Moscow has established a partnership with Kurdish fighters in the region.

"I would never have guessed that the Russians could have achieved so much with so little and yet they did pull off this extremely dangerous gamble and they won.  Only an extremely skillful combination of military, economic, diplomatic and political means could have yielded such a remarkable result but Putin, apparently, found this perfect mix," The Saker concludes.