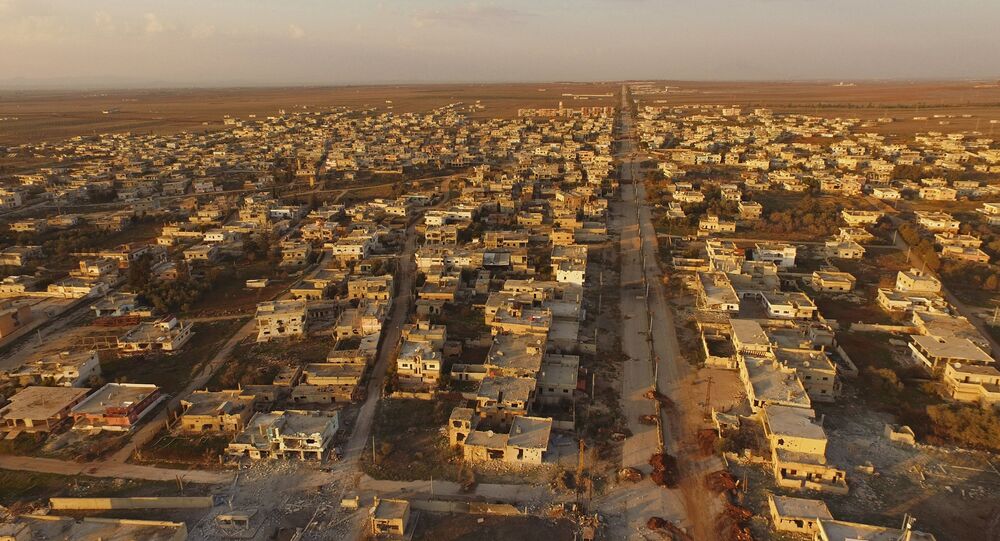 There won't be a nuclear war over Syria and its oil, nor is the ongoing conflict a prelude to a third world war, American researcher and strategic risk consultant F. William Engdahl underscores.

"In this most bizarre of seemingly endless conflicts in the Middle East, wars ultimately over something as stupid as control of oil, a most alarming report has surfaced introducing the nightmare scenario of nations using tactical nuclear weapons to secure their aims… I want to state something completely different about the report on possible use of nuclear weapons over the conflict in Syria. I refuse to believe there will be a nuclear war over Syria and oil. Full stop!" Engdahl writes in his article for New Eastern Outlook.

© REUTERS / Abdelrahmin Ismail
Divide and Conquer: Does Kerry's 'Plan B' on Syria Originate From 2008 Secret US-Saudi Plan?
The researcher calls attention to the fact that the simmering conflict in Syria is essentially a confrontation between two persons — Recep Tayyip Erdogan in Turkey and Bashar Hafez al-Assad, President of Syria, General Secretary of the ruling Baath Party in Syria.

"If we recognize this reality about the nature of the Syrian conflict, we begin immediately to relativize what's going on," Engdahl continues.

According to the American researcher, the problem is that there is a faction in the West harboring a plan to drag Russia into direct confrontation with NATO, including a nuclear one.

Remarkably, the US hawks previously tried to trick Russia into unleashing a war on Ukraine, but they have obviously failed.

Now they have no scruples about manipulating Erdogan, Saudi King Salman and his son Prince Mohammed to reach the goal.

Russia's involvement in Syria is in some sense playing into the hands of Washington's party of war, which is planning to orchestrate the collision of powers by aggravating further tensions in the region.

"Now we have an absurd situation with thousands of nervous Turkish military, standing, armed and peering across the border into Syria. Alongside that stupid spectacle, we have the recent deployment of Saudi Air Force jets now sitting at the Incirlik Air Base — 106 miles away from the Russian airbase at Khmeimim, near Latakia, Syria. The Saudi jets sit alongside some 5,000 airmen and the various military jets of the United States Air Force 39th Air Base Wing, and of the Turkish Air Force, along with F-15E jets from the British Royal Air Force that arrived in November, 2015 to join the 'attack on ISIS [Daesh]'," the researcher elaborates.

© CC BY 2.0 / Justin Vidamo / The Burning of the Sky
Oil Prices Slump: How Sino-Russian De-Dollarization May Save the Day
In his recent exclusive interview with Sputnik Engdahl stressed that "Russia is in a most risky situation in Syria if it and its leading people have any illusion that the other actors are reasonable."

However, the ongoing conflict is by no means a prelude to a nuclear third world war disaster — it is a conflict between Erdogan and Assad over control of oil and the vast sums of money from oil.

Regardless of alarmist speculations, there is no third world war nuclear disaster on the horizon in Syria.

Why are Riyadh, Ankara Adding Fuel to the Fire in Syria?