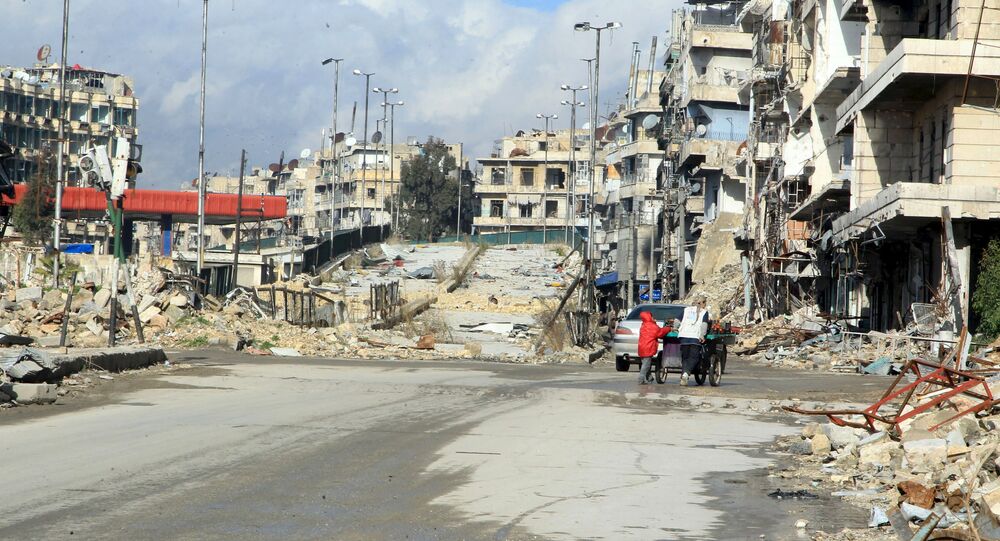 What lies beneath US Secretary of State John Kerry's intriguing "Plan B" and why do American war hawks insist that the Syrian ceasefire agreement is destined to fail? It seems that the US President is about to set off a chain of events that will literally blow up the Middle East, F. William Engdahl warns.

© AP Photo / Militant Website, File
Daesh Terrorists: A Multifunction Tool in Hands of Ankara, Riyadh, NATO
The ink had barely dried on the Syrian ceasefire agreement, when John Kerry announced that the Obama administration has a "Plan B" should the Syrian ceasefire and political transition fail.

"There is a significant discussion taking place now about a Plan B in the event that we do not succeed at the [negotiating] table," Kerry told journalists before a Senate Foreign Relations Committee hearing.

Although Kerry did not clarify to journalists what specific options Washington is discussing, in his previous comments the US Secretary of State hinted at the possibility of the division of Syria if the political transition does not happen within next few months.

It is hardly surprising that Plan B has finally emerged. In fact, Syria's "splitting up" has been mulled by Washington geostrategists and their Mideast allies since 2008. To be more precise, at that time a covert plan had been developed by then US Assistant Secretary of State for Near Eastern Affairs Jeffrey D. Feltman.

"In 2008, Feltman authored a secret plan with former Saudi Ambassador to Washington, Prince Bandar bin Sultan, nicknamed 'Bandar Bush' by George W. Bush for his intimate ties to the Bush family. That Feltman-Bandar Plan was revealed in internal documents hacked in 2011 from the thousands of files of Stratfor, the murky US 'strategic intelligence' consultancy to the Department of Defense and military industry," American researcher, historian and strategic risk consultant F. William Engdahl narrates in his article for New Eastern Outlook.

Engdahl points out that the Feltman-Bandar plan called for dividing Syria into different ethnic and sectarian groups, in particular Alawite, Sunni, Shiite, Kurd, Christian, as well as dividing the state into three zones — big cities, small cities and villages.

"Then the US and Kingdom of Saudi Arabia and selected allies would begin covert training and recruiting of five levels or networks of actors, controlled by the CIA and Saudi intelligence, which Bandar later headed, to execute the destruction or national dismemberment of Syria," the risk strategic consultant continues.

Citing sources with knowledge on the matter, Engdahl elaborates that that the aim of the 2008 Feltman-Bandar plan was to "bring Syria back to the 'stone age'."

Interestingly enough, Feltman is still playing an active role in the Mideast affairs: being the United Nations Under-Secretary-General for Political Affairs the US politician currently oversees the UN's diplomatic efforts aimed at preventing and mitigating conflicts worldwide, in particular, the ongoing Syrian crisis.

"And now, as UN Under-Secretary-General for Political Affairs, Jeffrey Feltman cannot be expected, like the proverbial leopard, to have changed his spots," the researcher remarks.

© AFP 2021 / FAYEZ NURELDINE
The Art of War: Will Russia Outplay Washington's Cunning Geostrategists?
Indeed, US war hawks are paving the way for "Plan B."

Washington's elusive "moderate rebels" can become the apple of discord: while Daesh and al-Qaeda's affiliate al-Nusra have already been designated as terrorists, there are still a lot of al-Qaeda-linked groups and Daesh sympathizers not on the UN list.

"Now, with perfect orchestration by Washington, their UN man, Feltman, Prince Salman and Recep Tayyip Erdogan of Turkey, the fuse is about to be lit on what is shaping up to be one of the most dramatic instances of 'national dismemberment' since 1939," Engdahl warns.

According to Syrian presidential aide Bouthaina Shaaban, Syrians will never accept the partition of their country.

"We have suffered for five years, the territorial integrity of Syria is dear to every person. This is what we want to keep. And the Security Council Resolution 2254 insists on the territorial integrity and unity of Syria… The Syrian people will never accept the partition of the country," Shaaban said at an experts meeting of the Valdai club in Moscow.