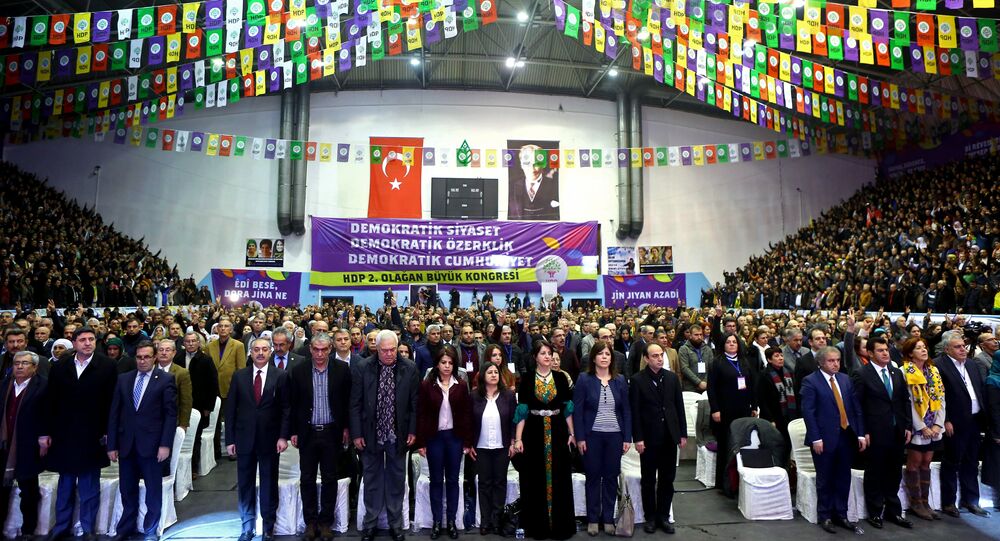 MOSCOW (Sputnik) — In early January, Erdogan called for the HDP's leadership to be stripped of their parliamentary immunity for the "constitutional crime" of calling for more autonomy in the southeastern Anatolia region.

"Motions [to remove the immunity of HDP deputies] should not be let to rot on the shelves of Parliament. Necessary action must be taken," Erdogan said in a speech addressing the heads of rural and neighborhood administrations, as quoted by the Today's Zaman newspaper.

© REUTERS / Sertac Kayar
Turkey's Pro-Kurdish Official Decries Ankara's 'Hostile' Policy
HDP's co-chairs Selahattin Demirtas and Figen Yuksekdas are also being investigated by the Chief Public Prosecutor’s Office in Diyarbakir for inciting revolt and terrorist propaganda in the statements they made at a Democratic Society Congress (DTK) meeting on December 26-27.

The HDP, which holds 59 of the 550 seats in the Turkish parliament, has been accused of having ties with the Kurdistan Workers' Party (PKK), a militant group that is seeking independence for Turkey's southeastern Kurdish-dominated regions and considered a terrorist organization by Ankara.

Formed in 2012, the HDP became the first Kurdish-associated political party to reach the 10 percent threshold needed to secure representation in parliament during Turkey's June 2015 elections.