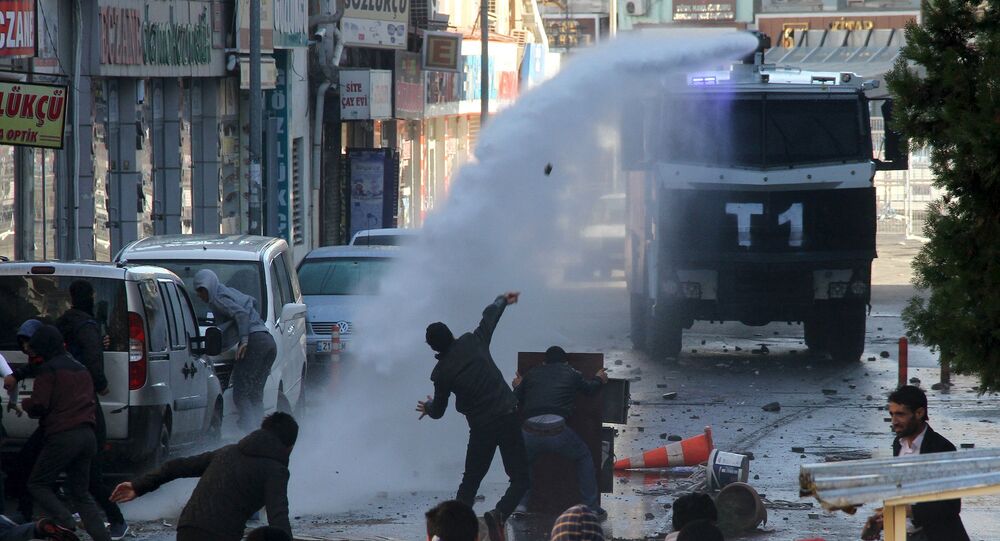 Southeastern regions of Turkey are ravaged by a de facto civil war between government forces and Kurdish militants; this conflict could well spill into other Turkish provinces due to growing social unrest in the country, political analyst Andrey Areshev of the Strategic Culture Foundation asserted.

© AFP 2021 / BULENT KILIC
Reaping What You Sow: This is Why Turkey is in a 'De Facto War-Like Situation'
The standoff between Ankara and the Kurdistan Workers Party (PKK) has further deepened following a deadly attack in the Turkish capital, which claimed the lives of 29 people on February 17.

Prime Minister Ahmet Davutoglu pinned the blame for the suicide bombing on the Syrian Kurds, although Turkey-based Kurdistan Freedom Falcons claimed responsibility. For their part, the People's Protection Units (YPG), affiliated with the Democratic Union Party (PYD), has denied any links to the assault.

© AFP 2021 / ADEM ALTAN
Turkish police secure the site of an explosion after an attack targeted a convoy of military service vehicles in Ankara on February 17, 2016

The YPG might seem like the first choice for Ankara, but, according to the expert, there are other forces, which could benefit from destabilizing the country. Those are the ones, who want to discredit the Kurds or wish to change the parliamentary system of government to a presidential one, he suggested.

"Reckless policies of the Turkish leadership, which supports various terrorist organizations," have contributed to "the Turkish society becoming more radicalized," Areshev told Gazeta.ru. "In this context, it is not inconceivable that terrorist groups, formally and ideologically affiliated with Daesh, could be linked to the [recent] terrorist acts."

© AFP 2021 / ARIS MESSINIS
Washington's Message to Turkey: 'Don't Expect NATO to Rescue You in Syria'
Furthermore, the Turkish Kurds are not the only ones who oppose Erdogan's policy in the Middle East, particularly in Syria, he added. Yet, Ankara has focused on blaming the Kurds for its most recent tragedy.

Recep Tayyip Erdogan and his supporters view the Kurds, living in Turkey and elsewhere, as a threat to the country's territorial integrity and stability. The situation is further complicated by the fact that Washington views Kurdish fighters in Iraq and Syria as one of its key allies in fighting Daesh.

"Ankara could consider Washington's desire to protect the Syrian Kurds as a sign that the Kurds would eventually receive their own state," the media outlet observed. This political entity "would allow the United States to create a new area of tensions that would contain Iraq, Iran and Turkey."