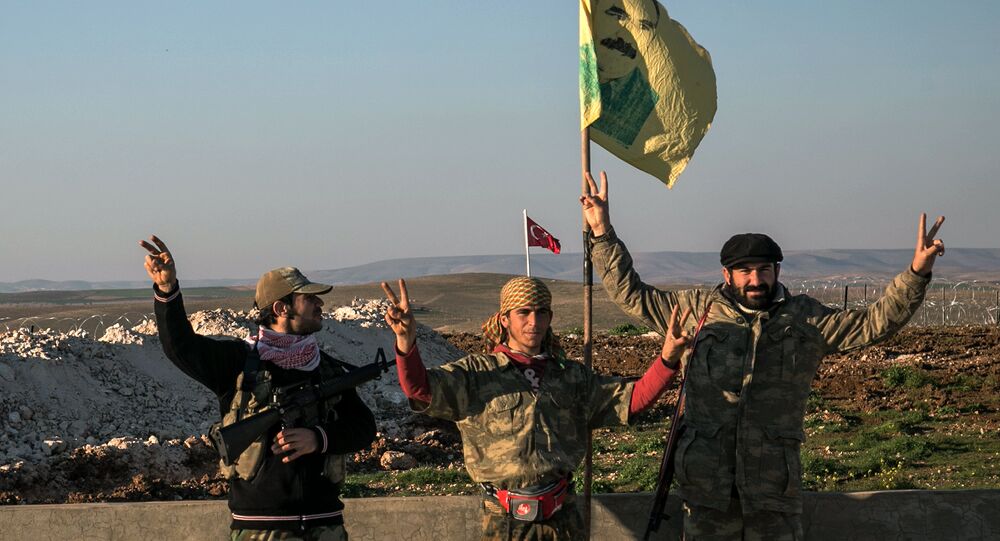 Earlier this month, the Syrian Kurdish Democratic Union Party (PYD) established a political office in Moscow, a step officials hailed as a "big political step." Commenting on the event, International Business Times suggested that the growing antagonism between Turkey and Russia has made Moscow more daring in its relations with the Kurds

© AFP 2021 / DELIL SOULEIMAN
Three Reasons Behind Syrian Kurds Turning to Russia
On February 10, the PYD opened a political office in Moscow; Russia has been looking to include the Kurds in the Syrian peace talks, despite objections from Turkey. Speaking at the mission's opening ceremony, Merab Shamoyev, the chair of the Russia-based International Union of Kurdish Public Associations, said that the new office signaled "a historic moment for the Kurdish people," adding that in the Middle East, Russia is "not only an actor, but also writes the script."

The political significance of the new mission, officially registered as a non-commercial organization, was not lost on foreign commentators.

Interviewing Rodi Osman, the head of the new diplomatic mission, International Business Times emphasized that "the young official has made diplomatic history as the first head of a foreign mission for the Kurdish-led administration that controls large swathes of northern Syria wrested from Damascus during the bloody civil war."

And while IBT isn't exactly being honest about the Kurds 'wresting the area from Damascus' (Syrian government troops withdrew from the area independently to fight elsewhere in 2012, with YPG People's Protection Units, the armed wing of the PYD, stepping in to defend the areas against jihadist militants), the newspaper's point about "making diplomatic history" is a valid one.

#Kurdish groups in #Syria have opened a representative office in #Moscow pic.twitter.com/tEIM4MRyNC

"The Moscow location of the office," the paper noted, "reflects the Kremlin's increasingly active presence in the Middle East and the game-changing effect of Russia's five-month bombing campaign in support of Syrian President Bashar Assad."

© AFP 2021 / ADEM ALTAN
Turkey’s Kurdish Conundrum
At the same time, IBT said, "the Russian decision to allow the Kurdish office is also likely to anger Ankara amid an increasingly bitter Russian-Turkish standoff sparked by the downing of a Russian jet near the Syrian border last year. Moscow and Ankara back different sides in Syria's civil war, with Ankara seeking Assad's ouster and accusing Russia of bombing the moderate anti-Damascus rebel groups it supports."

​Moreover, "Turkey has been enraged by the gradual Kurdish expansion in northern Syria, fearing it will stoke separatist ambitions among its own Kurdish population. Amid advances by Assad's troops under the cover of Russian airstrikes, the Kurdish YPG militia seized ground near the Turkish border in recent weeks, including the strategically important Menagh airbase. Turkey responded to Kurdish gains last week with artillery attacks on Kurdish fighters."

"The worsening of relations with Turkey has made Russia more daring in its relations with the Kurds," Elena Suponina, a senior analyst specializing in the Middle East at the Russian Institute for Strategic Studies, told IBT.

Ultimately, the newspaper warns, "the Kurds will have to tread a fine line. Kurdish fighters have received military backing from the United States, and echoing the Russian line too closely could alienate their Western backers."

​At the same time however, the paper reports, citing Osman's words, that "similar offices to the one in Moscow will be opened in Germany, Sweden and Denmark within a month."

"If Russia accepts the opening of a representative office for Western Kurdistan it means Russia is prepared to accept a multi-confessional federation in Syria," the PYD official added, effectively debunking suggestions by some analysts that the Kurds want 'independence' from Syria.

© AFP 2021 / BULENT KILIC
Turkey Shelling Syrian Territory is 'Sheer Outrage' - Russian Foreign Ministry
"Russian officials," IBT notes, "have repeatedly criticized Turkey over their treatment of the Kurds in recent weeks, and spoken out against the exclusion of Kurdish groups from peace talks in Geneva between Syria's warring parties." However, the paper adds, Moscow's relations with the Kurds go back a long way.

"In 1946, the Soviet Union backed the creation of the Mahabad Kurdish Republic in Northern Iran, and there were allegations in the 1980s that Moscow financed the Kurdistan Workers' Party (PKK) when it began an insurgency against Ankara."

"Even before the opening of the representative office in Moscow, there have been signs of warming ties between Russia and the Kurds, who live not only in Syria, but also Turkey, Iraq and Iran. Masoud Barzani, current president of Iraqi Kurdistan and the son of Kurdish rebel leader Mustafa Barzani, who lived in the Soviet Union for eight years, was received by [Foreign Minister Sergei] Lavrov in Moscow in 2013."

© Photo : Russian Defence Ministry
'Erdogan's Worst Nightmare': Russia and Syrian Kurds Working Together
In December 2015, "Lavrov hosted Selahattin Demirtas, the leader of Turkey's pro-Kurdish People's Democratic Party…which Turkey accuses of having links with armed Kurdish groups opposed to Ankara in the country's southeast." For his part, IBT noted, "Osman said that Russian officials first raised the possibility of opening a mission from Syrian Kurdistan in 2014, and he was chosen as the representative in August 2015."

Ultimately, Suponina told the paper, "the strengthening of ties between Russia and the Kurds started several years ago and is tied to Russia's new Middle Eastern engagement."