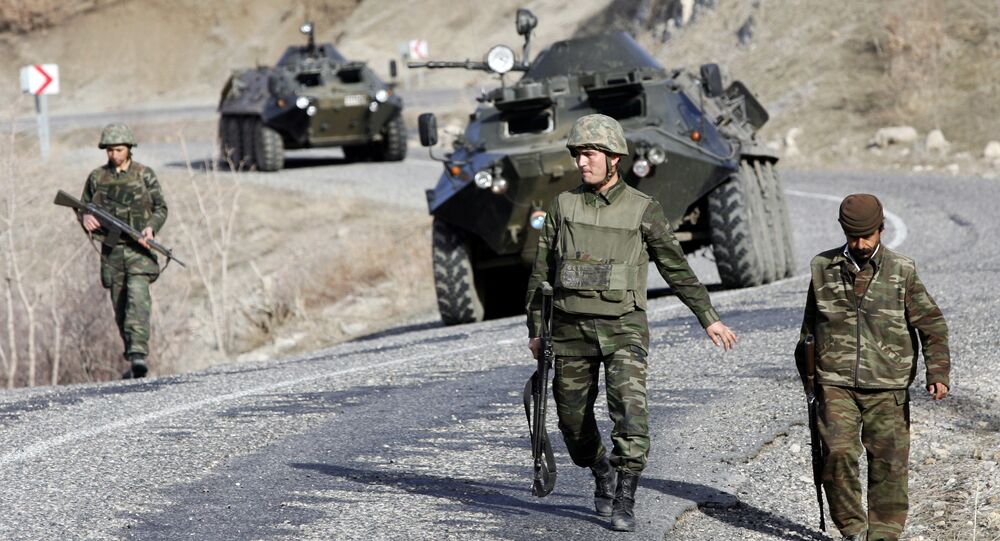 To complicate matters further Turkey, Saudi Arabia and some other Gulf States announced that they are mulling a ground operation in Syria as part of the US-led coalition's campaign in the region.

Ankara and Riyadh want boots on the ground to stop the Russo-Syrian advance in Aleppo; the move can translate into a direct conflict between NATO and Russia.

In an interview on The John Batchelor Show, Stephen F. Cohen, professor emeritus of Russian studies at New York University and Princeton University, warned against irresponsible moves in the region.

He referred to former British chief of the defense staff General Sir David Richards and former chairman of the US Joint Chiefs of Staff Gen. Martin Dempsey, who claimed that Bashar al-Assad's Syrian Arab Army (SAA) is the only credible force that can defeat Daesh on the ground.

While US President Obama pledged to avoid sending boots on the ground to Syria, the SAA remains the only military force to confront Daesh. In this light it is inconsistent to accuse President Putin of sending Russia's Air Force to bolster the Syrian government army, the professor noted.

"On the issue of who should do and can do the fighting [in Syria] I always believed and in fact the retired chief of the British general staff Lord [Richards] said… that there is only one real fighting force — the Syrian Army. Therefore Obama's plan to get rid of Assad which would risk the stability of the Syrian state and thus the Syrian Army, as happened when they got rid of Gaddafi in Libya, was a mistaken policy. And we know from the recording of Seymour Hersh about a month ago in the London Review of Books that when Gen. Dempsey was Chief of Staff he told Obama that it was crazy to try to remove Assad. You need the Syrian Army to do the fighting," Professor Cohen underscored.

© AFP 2021 / BULENT KILIC
Teetering on the Edge: Why are Riyadh, Ankara Adding Fuel to the Fire in Syria?
The Russian Air Force has been supporting the Syrian Arab Army advance and is doing it so well that the SAA together with Kurdish militia have expelled Daesh and al-Nusra Front from their strongholds in Syria.

Professor Cohen pointed out that in fact by bolstering Bashar al-Assad Putin is pursuing the military strategy with which a lot of people agree.

"The Islamic State [Daesh] will be driven soon out of Aleppo, its secondary capital in Syria, and maybe Raqqa, which is its number one capital. So, this is a military success for Russia, leading Secretary of State Kerry and Russian Foreign Minister Lavrov to begin political negotiations with all the parties involved… that call very soon for a ceasefire, not a ceasefire against the Islamic State, and the political process that eventually in 18 months or two years lead to elections in Damascus," the American academic noted.

The potential détente that could be established between Russia and the United States in the course of the Syrian negotiations comes under fire from Washington's powerful war party that opposes Kerry's diplomatic approach to the Syrian crisis.

© AFP 2021 / MOHAMMED AL-KHATIEB
Tension Escalation: 'Turkish and Saudi Boots in Syria May Trigger WW3'
It seems that these people, who try to throw a monkey wrench in Kerry's diplomatic efforts would actually prefer Daesh to Vladimir Putin, the professor remarked.

The Saudi-Turkish adventure in Syria may ruin the ongoing peace process and drag global powers in a wider war. The question remains open whether or not Washington war planners approve the initiative, in other words, whether or not the US war party will prevail.

According to the US academic, there is a plan for an actual invasion of Syria by Turkey, a NATO member-state, and US' longstanding ally Saudi Arabia. While Ankara and Riyadh insist that they are going to counter Daesh, they will in fact fight against the Syrian Army, which means to fight against Russia, Professor Cohen warned.

We are facing the end of the world order and the new order is struggling to be born, he noted, adding that what makes matters worse is that there are no rules in the ongoing "cold war."

Commenting on the issue, the British geopolitical analyst Finian Cunningham expressed his hope that Washington will restrain itself from authorizing the Saudi-Turkish advance, which could eventually lead to clashes between Russo-Syrian forces and NATO member-state Turkey.

"Washington has publicly approved or given a kind of consent to this mobilization but if you [look] at recent interviews the Saudi foreign minister emphasized that it's conditional on a full and explicit "go ahead" from Washington. So, would Washington actually give it this consent, I don't know… I think that Washington would restrain itself from allowing the Saudis and the Turks to actually go in to Syria given the consequences," the British analyst told Radio Sputnik referring to the possibility of a wider conflict in the region.