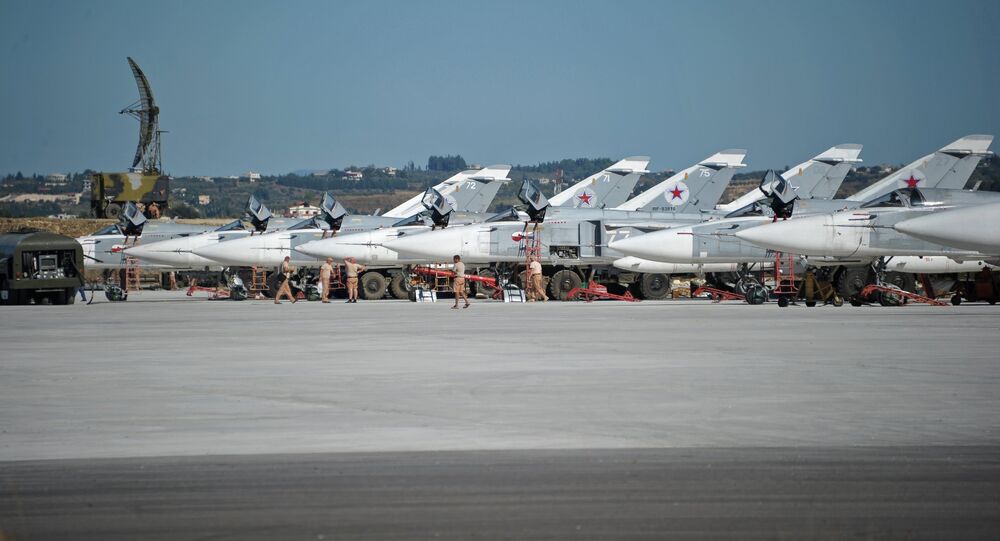 Has the Russian Military Just Forced Obama to Admit Defeat in Syria?

On Wednesday, President Obama admitted that he sees no chances for victory for the Syrian opposition, supposedly because it is outclassed by the Russian military, "the second-most powerful in the world." Russian analysts wonder what to make of the president's words, and whether they signal that the war in Syria may finally be coming to an end.

© AFP 2021 / MARTIN BUREAU
Obama on Syria, Relations With Russia and Terrorism: US-ASEAN Summit
Speaking at the Association of Southeast Asian Nations (ASEAN) conference in California on Wednesday, the US president was asked by Bloomberg reporter Toluse Olorunnipa whether he had been "outfoxed" by Russia's President Putin in Syria. Russia, the journalist suggested, had managed not only to avoid getting caught in a quagmire (contrary to US expectations), but had succeeded in bolstering the Syrian government, whose army has been making major advances around Aleppo, while US-backed rebels have been on the retreat.

Put on the defensive, Obama insisted that actually, Russia would "absolutely" get involved in a quagmire, and that "about three-quarters of [Syria]…still under control of folks other than Assad." Of course, the president failed to mention that most of that territory is sparsely populated, and that about 80% of Syria's population lives in government-controlled areas.

More importantly, the president conceded that "yes, Russia has a major military. Obviously, a bunch of rebels are not going to be able to compete with the hardware of the second-most powerful military in the world."

© AFP 2021 / SANA
Resilient and Pluralistic: Why Syrian Arab Army Enjoys Public Support
As a result, Obama suggested, "the only way to do that is to bring some sort of political transition."

Analyzing the president's words, Svobodnaya Pressa columnist Andrei Ivanov remarked that Moscow, for its part, has always been in favor of a peaceful settlement and that in fact, "it is the opposition which has disrupted the peace talks, by setting impossible demands, including that Bashar Assad step down."

"However," the journalist added, "Obama's words do mark an interesting change of rhetoric. Earlier, Washington had insisted that the opposition fighters they were preparing would simultaneously fight both the terrorists and overthrow Assad. Supposedly, if Moscow had not supported the government in Damascus, peace would have come a long time ago."

"Now, Obama is openly saying that the opposition is facing defeat. It's true, the Syrian Army could not advance without Russian support. But the US no longer has any reason to put its hopes in the opposition. Put in another way, Washington will have to abandon its previous plans."

The change in the president's tone, it seems, "was the result of the strength of the Russian military."

In the past two years, after relations between the West and Russia took a turn for the worse, there has been a lot of talk about the growing strength of the Russian army, including a variety of analyses and tables, such as those from the respected open-source military ranking service Global Firepower.

"However, it's one thing for analysts' rankings and articles in newspapers to say it; it's quite something else for the American president to do so," Ivanov noted.

© AFP 2021 / FAYEZ NURELDINE
The Art of War: Will Russia Outplay Washington's Cunning Geostrategists?
"Only recently, Obama had assured everyone that the Russian economy had been 'torn to shreds', and that sanctions would lead to the country's collapse, and the defeat of our air operation in Syria. Now, he has factually acknowledged not only that Russia is a military power, but that the US itself is facing a difficult situation in the Middle East."

Asked for comment, Mikhail Alexandrov, the head expert at the Center for Military Political Studies at the Moscow State Institute of International Relations, told the newspaper that the US president is simply admitting the obvious.

"In my view, Obama simply stated the obvious: that the Syrian opposition does not have any chances for success. What kinds of political conclusions we should make from the American president's words is another matter. I think that Obama has come to the conclusion that it is useless to support the opposition, especially because it never really existed. There were a few numerically small, symbolic units, which were necessary to start negotiations with Assad, but these groups decide nothing, and do not have an impact on anything" in the strategic sense.

© Sputnik / Dmitriy Vinogradov
Double Game: 'No Ceasefire in Syria Until ‘Turks, Saudis & US Try to Achieve Own Goals'
"The backbone of the forces fighting the Syrian Army is made up of the terrorists," the military expert emphasized. "The US did not risk supporting them openly, although Turkey did."

Interpreted another way, Alexandrov suggested, Obama's words might be a signal to the Syrian opposition not to continue to stall the Syrian peace talks, the next round of which will be made next week.

"Obama is factually calling on them not to evade the negotiations. After all, soon the Syrian Army, supported by Russia, will liberate the entire country, and then the opposition will not have any opportunity to agree on anything. For now, they still have a chance. The assault to free Aleppo and the operations in Idlib province have cost the Army a great deal of effort, and resulted in civilian casualties. Nobody wants to see further blood. And so for now, the opposition still has something to bargain with. But its window of opportunity is quickly narrowing."

Ultimately, Alexandrov says, "the US has already lost in Syria. Without an operation on the ground they will not be able to restore their positions. Now, Washington has another goal: to obstruct as much as possible Assad's ability to achieve victory – through negotiations, and by continuing [in one way or another] to back the terrorists, which will force the Syrian army into prolonged fighting. The US will now be looking to drag out the war as much as possible."