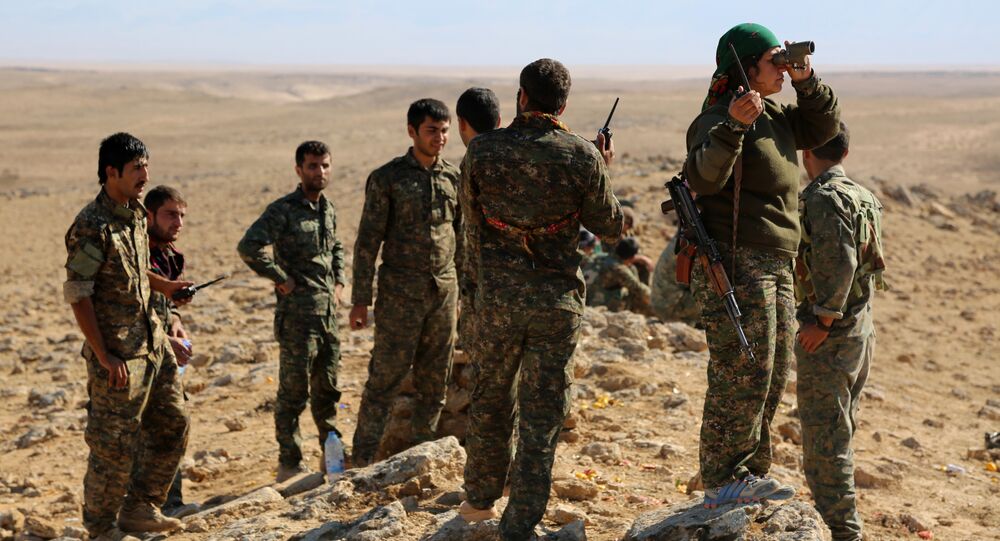 The Turkish Prime Minister's vain attempts to pin the blame for the Syrian refugee crisis on Russia are the only way to divert public opinion from Turkey's own "hysteric drive against Kurds," political analyst Salman Rafi Sheikh emphasizes.

© Sputnik / Dmitriy Vinogradov
Praying for Peace: Russian Campaign Offers Best Chance to Save Syria
Earlier this week, in the course of his visit to Ukraine, Turkish Prime Minister Ahmet Davutoglu blamed Russia for the ongoing refugee crisis and civil casualties in Syria and even went so far as to equate Russia with Daesh (ISIL/ISIS).

"Russia and other terrorist organizations — first and foremost, the Islamic State in Syria — are responsible for numerous crimes against humanity," Davutoglu said in an official statement.

"If Russia continues behaving like a terrorist organization and forcing civilians to flee, we will deliver an extremely decisive response," he added.

Russia's Foreign Ministry responded to the groundless and ludicrous accusations.

"Statements by Turkish officials that Russia secretly supports IS [Daesh] are completely unacceptable. Mr. Davutoglu, are you actually making such jokes? If this is a joke, then everyone, especially Turkey, should pay less attention to irony and more to specific actions to combat terrorism," Foreign Ministry spokesperson Maria Zakharova said during a Moscow briefing on Thursday.

© REUTERS / Sertac Kayar
Turkey May Continue Attacks on Kurds Despite Int'l Calls for Restraint
However, the voice of reason did not prevent Davutoglu from making additional nonsensical accusations against Moscow.

"If these terror attacks continue, they [Russia] will be as responsible as the YPG [Kurdish People's Protection Units]," he said in a televised statement as quoted by the Financial Times.

Ankara's enmity against Russia and Kurds is deeply rooted in its neo-Ottoman ambitions in the region and the necessity to justify Turkey's meddling into Syrian affairs.

Although the Turkish government insists that it were Kurds behind the deadly attack, experts assume that Ankara wants to use the Kurdish card in order to crack down further on the ethnic minority and justify the Erdogan government's Syrian adventure.

​"The Turkish government is now charging YPG with responsibility for the blast in Ankara. It is an unbelievable scenario for many reasons. First, YPG has never looked for increased enmity on Turkey, they are just trying to equal the relations on both sides of the border. Secondly, the Turkish government is looking for an excuse to send troops to Northern Syria," Ertugrul Kurkcu, the honorary president of the Turkish Peoples' Democratic Party told Sputnik on Thursday.

© REUTERS / Kayhan Ozer/Presidential Palace
Erdogan's War Against Kurds in Southeast Turkey is 'Part of Business Plan'
Indeed, while the Turkish Prime Minister is fretting and fuming over Russia's foreign policy in Syria, the Turkish Armed Forces are busy bombing Kurds inside and outside Turkey.

"Since the beginning of the war, Turkey has been attacking Kurds both inside and outside Turkey. In Diyarbakir region, Turkish tanks, along with more than 2,000 police and soldiers, appear bent on burying in rubble the Kurds as well as PKK [Kurdistan Workers' Party] fighters," political analyst Salman Rafi Sheikh writes in his article for New Eastern Outlook.

On the other hand, Turkey is shelling parts of northern Syria to prevent the Kurdish YPG forces, fighting Daesh and al-Nusra Front, from seizing key areas along the Syrian-Turkish border.

According to Sheikh, Ankara has adopted a controversial "two-edged 'final solution,' which involves a military operation against KPP and YPG and the economic strangulation of Kurds within Turkey."

"Erdogan's ruling party, which self-ironically once called for an end to Kurdish persecution, has now been selling the 'final solution' of the Kurdish question to its voters since its initial failure to win an absolute majority in the June 2015 elections. To secure the required majority, it started conflict with the PKK, selling the idea of re-establishing the glory of the 'Ottoman Empire' under the re-defined banner of Turkish nationalism and now feels politically obliged to eradicate the Kurds," the political analyst explains.

© AFP 2021 / BULENT KILIC
Teetering on the Edge: Why are Riyadh, Ankara Adding Fuel to the Fire in Syria?
Under the smokescreen of the "fight against terrorism," the Turkish leadership is terrorizing Kurds, the world's largest state-less ethnic group. Furthermore, Ankara's actions have nearly reached the extent of potential ethnic cleansing of the Kurdish minority.

"In this context, Turkish Prime Minister's accusations against Russia's legitimate intervention in Syria are only a way to downplay the extent of Turkey's own hysteric drive against Kurds," Sheikh underscores.

Meanwhile, "the mainstream Western media continues to pay only lip service to the humanitarian crisis Turkey has created," he stresses.