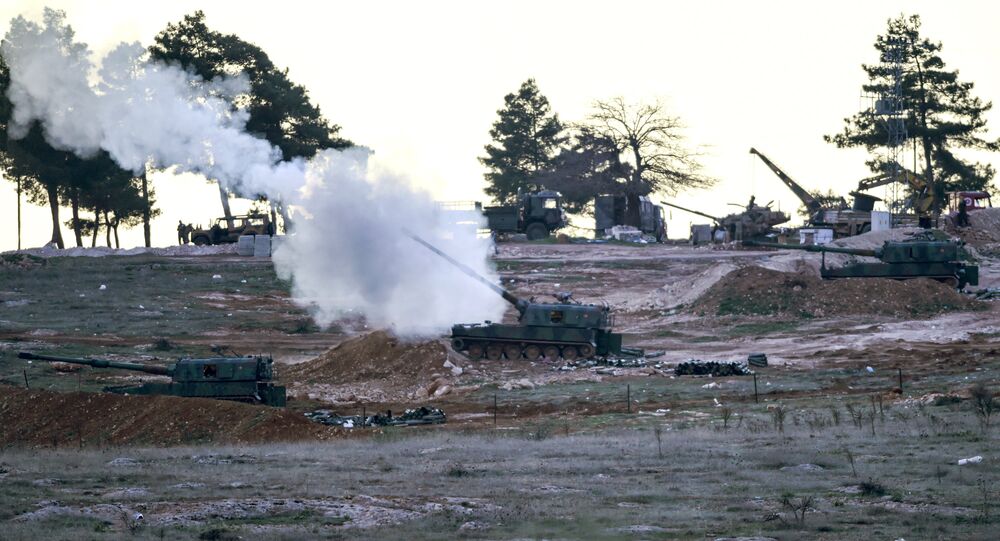 Why are Riyadh, Ankara Adding Fuel to the Fire in Syria?

The world is teetering on the edge of a wider war in Syria, experts say; the question remains whether Saudi Arabia and Turkey's saber-rattling on Syria's borders are just a form of psychological intimidation or part of a NATO strategy aimed at launching a foreign intervention.

© Sputnik / Dmitriy Vinogradov
Shell Shocked: Militants Retreat From Strategic Towns in Aleppo Province
One by one, the Syrian Arab Army (SAA), with the help of Russia's Air Force, has severed the supply lines of Daesh, the al-Nusra Front and related militant factions around Aleppo and along the Turkish-Syrian border. Meanwhile, Kurdish troops and the Syrian Democratic Forces continue to battle Islamist militants for control of Azaz in northern Aleppo Province, despite repeated missile attacks from Turkish troops stationed on the opposite side of the border, less than 10 km away.

In addition to Turkish President Erdogan's continuing war against Kurds both in Syria and his own country, it seems that Turkey and Saudi Arabia are attempting to throw a monkey wrench in the Russo-Syrian advance: the countries have pledged to kick off a ground operation in Syria, should Washington give its blessing.

The question then arises: what lies beneath the plan?

"An invasion into Syria would constitute an act of war — and beyond that — affirmation that NATO was behind the ISIS (Daesh) menace from the beginning. While leaks like that of the United States' own Defense Intelligence Agency (DIA) in 2015 have exposed this rhetorically, a NATO invasion of Syria to save an ISIS stronghold from destruction would prove it demonstrably," Bangkok-based geopolitical analyst Tony Cartalucci writes in his article for New Eastern Outlook.

© Sputnik / Michael Alaeddin
Destroy Syria… Get Others to Pay
The analyst notes that the fact that Washington has repeatedly tried to distance itself politically from Turkey and Saudi Arabia may indicate "a possible attempt to produce plausible deniability ahead of a much larger provocation or intervention."

Cartalucci refers to the fact that back in 2009 US hawks offered a plan that envisaged an apparent "unilateral" attack by Israel against Iran to trigger Tehran's retaliation. It was supposed that Iran's move would be used by Washington as a pretext for an invasion.

"A similar strategy appears to be materializing along Syria's borders today," Cartalucci warns.

However, according to British geopolitical analyst and Sputnik columnist Finian Cunningham, Washington would restrain itself from allowing Saudis and Turks to go to war in Syria.

In an interview with Radio Sputnik, Cunningham suggested that Ankara and Riyadh's pledge to deploy boots on the ground in Syria is just psychological intimidation towards Damascus and Moscow to obtain concessions from them in terms of the political process.

It remains unclear at that stage whether it is a psychological operation or if they are really intent on going in, he noted.

On the other hand, given the nature of the Riyadh regime and the Ankara regime everything is possible, he stressed citing Syrian President Bashar al-Assad, who dubbed them as "reckless" and "lawless."

"Given the nature of these regimes and desperate situation they are in because they are losing the covert war, they could bomb the way into a wider war that could drag in several international actors and in particular Washington confronting Russia," Cunningham said.

© AP Photo / Carolyn Kaster
Riyadh on the Brink: Washington Must Prepare for Collapse of its Mideast 'Lynchpin'
The analyst called attention to the fact that Washington has publicly endorsed Saudi Arabia and other Persian Gulf Arab states' mobilization, de facto giving a green light to a possible invasion of Syria.

"Washington has publicly approved or given a kind of consent to this mobilization but if you [look] at recent interviews the Saudi foreign minister emphasized that it's conditional on full and explicit "go ahead" from Washington. So, would Washington actually give it this consent, I don't know… I think that Washington would restrain itself from allowing the Saudis and the Turks to actually go in to Syria given the consequences," the British analyst emphasized referring to the possibility of a wider conflict in the region.

Both analysts underscore that Washington and major European states have failed to condemn Turkey for shelling northern Syria, in particular the pivotal Syrian city of Azaz.

Cunningham noted that Ankara's military action is apparently aimed at giving jihadi mercenaries on the ground some kind of cover.

"The city is on the verge of being overrun by Kurdish fighters who will for all intents and purposes shut down one of ISIS' [Daesh's] last remaining logistical hubs supplying their fighters in Syria from Turkey," Cartalucci explains.

© AP Photo / File
Syrian Peace Impossible Until West 'Stops Funding Terrorists on the Ground'
At the same time, Turkey and its foreign backers are trying to pin the blame on Moscow for civilian deaths in Syria, the British analyst said, referring to groundless allegations that Russian jets destroyed a hospital in Syria supported by the charity organization Medecins Sans Frontieres(MSF).

According to Cunningham, given Ankara's own glaring misdeed, Turkish accusations against Russia are the height of hypocrisy.

The truth of the matter is that Turkey is outraged by the Russo-Syrian dramatic advance that has displaced Ankara-backed Islamists and allowed the Syrian Arab Army to retake strategic territories.

"While the US and Europe attempt to distance themselves from Turkey, they have at the same time committed to a campaign of disinformation attempting to frame ongoing [Russo-Syrian] security operations moving ever closer toward Turkey's border as 'targeting civilians' and attacking 'moderate rebels' at the expense of fighting ISIS," Cartalucci stresses, adding that the next few days would show whether or not the Syrian conflict will escalate into a greater war.