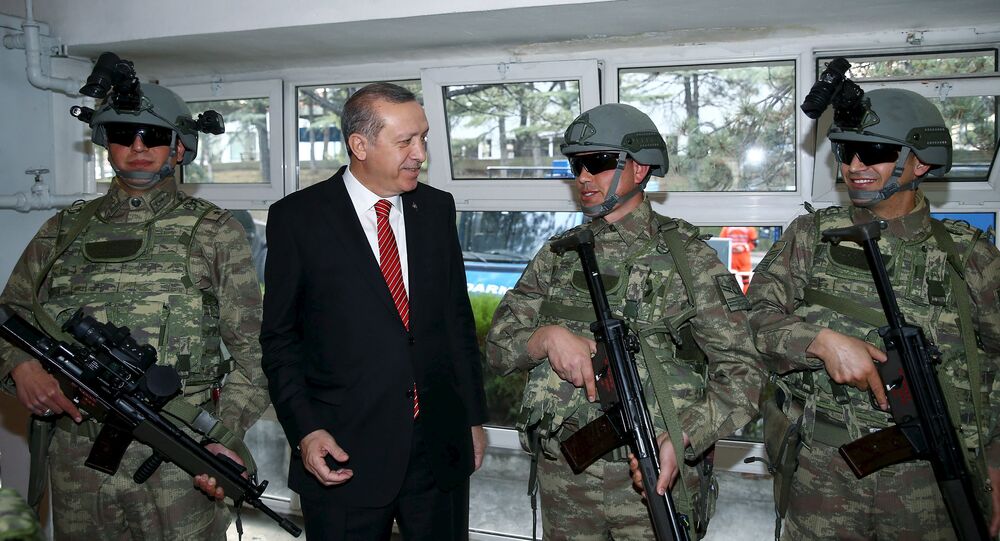 Ankara has unleashed a devastating war against Kurds in the southeast Turkey to "urgently nationalize" the affected structures and implement the AKP-led project of Urban Change in Diyarbakir, Istanbul-based independent scholar Dr. Can Erimtan writes, dubbing the process as "disaster capitalism à la Turca."

The Kurdish peace process launched by Recep Erdogan's Justice and Development Party (AKP) back in 2009 has been eventually brought to an end by Ankara, who now has unleashed an all-out war against its own population in southeastern Turkey.

"The Turkish-state-as-led-by-the-AKP has been waging all-out war against the PKK [Kurdistan Workers' Party] ever since the June elections proved unable to produce the desired outcome. In fact, the hostilities began on 24-25 July 2015 when Turkey's Armed Forces (TSK) undertook Operation Martyr Yalcın aimed at PKK and ISIS [Daesh] positions in northern Iraq (KRG) and northern Syria (Rojava)," Istanbul-based independent scholar Dr. Can Erimtan narrates in his article for New Eastern Outlook.

© AFP 2021 / ADEM ALTAN
Erdogan Urges US to Recognize Syrian Kurdish PYD Group as Terrorists
Citing Human Rights Watch's December report, the scholar calls attention to the fact that since July 2015 Kurdish civilians including women, children and elderly residents have been killed in the course of the Erdogan government's military operation in southeastern Turkey.

The severe military crackdown has led to the destruction of numerous buildings and monuments, including mosques and churches.

According to Erimtan, the ongoing operation is not a mere punitive action, but, apparently, part of Ankara's business plan.

The crux of the matter is that since 2010 the AKP-led government has repeatedly made vain attempts to kick off the Urban Change program in Turkey's southeast region. The project envisaged that 330 individual buildings would be demolished in the area of Sur in Diyarbakir.

"In view of the numerous protests against this apparently wanton and profit-driven destruction, these controlled demolitions were brought to a halt subsequently. But now that real estate is being destroyed in the course of the ongoing armed conflict, Turkey's State Housing Agency Directorate (TOKİ) has come to the fore once more," Erimtan elaborates.

© AFP 2021 / DELIL SOULEIMAN
Doomed: Commander Reveals How Syrian Kurds Liberated Key Terror Stronghold Near Aleppo (VIDEO)
Turkish pro-government media outlets have begun to bang the drum for the AKP-led program of Urban Change in Diyarbakir, claiming that the affected structures should be "urgently" nationalized and rebuilt.

There is something very fishy about the Turkish Ministry for Environment and Urban Planning's report 'Urban Change and Diyarbakir,' issued in February 2015, when nothing hinted at any trouble, the scholar stresses.

"The report deals specifically with the area of Sur within the prefecture of Diyarbakir and proposes the realization of 'a comprehensive change' in favor of earlier 'localized interventions' or 'narrow-scope implementations' in order to accomplish feats of 'conservation,' 'regeneration,' and 'renewal' in the area," Erimtan explains.

The lucrative project envisioned the construction of 8,000 new buildings and the conservation of 1,000 historical monuments.

What lies beneath Ankara's punitive operation in southeastern Turkey? Apparently it is Erdogan's "disaster capitalism."

Erimtan refers to Canadian author Naomi Klein's book "The Shock Doctrine: The Rise of Disaster Capitalism" (2007) that describes the controversial strategy invented by US economist Milton Friedman and then implemented by his followers all over the world.

"Only a crisis — actual or perceived — produces real change. When that crisis occurs, the actions that are taken depend on the ideas that are lying around. That, I believe, is our basic function: to develop alternatives to existing policies, to keep them alive and available until the politically impossible becomes the politically inevitable," Friedman wrote in the 1960s.

© AP Photo / Mursel Coban
Turkey 'Wants a Ground Operation' in Syria, Ankara Looking for 'Friends'
Klein's book tells the story of the utter victory of neoliberalism and corporations which used natural and man-made disasters and wars to ruin a region's economy and infrastructure in order to grab its assets and natural resources.

Remarkably, in 2015 independent Australian journalist Antony Loewenstein released his book "Disaster Capitalism: Making a Killing out of Catastrophe" that echoes Klein's concept and confirms that disaster has become big business.

Erimtan believes that the Erdogan government is implementing its own version of disaster capitalism in Turkey. Instead of bolstering the country's productivity and increasing its gross domestic savings, the AKP is pushing ahead with widespread privatization of Turkey's state assets and enterprises.

The ongoing armed conflict is seen as an ideal business opportunity by Ankara: ignoring the people on the ground the Erdogan government is planning to carry out its lucrative building project in southeast Turkey.