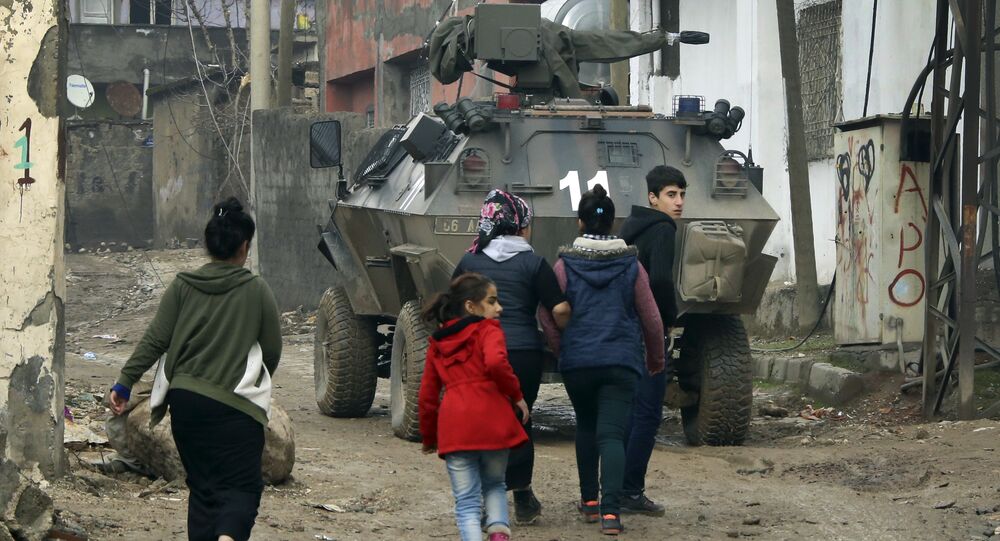 Turkish President Recep Tayyip Erdogan has attacked Kurds in neighboring Syria in order to win popular support at home and because he was wary about the gains they had been making against anti-government groups, according to Selma Irmak, a Turkish parliament deputy from the Democratic Party of Peoples (DPN).

© AFP 2021 / BULENT KILIC
Turkish Army Shells Kurds in Syria Near Border for Third Day in a Row
“The most important reason is Rodzhava (Syrian Kurdistan) and the success the Kurds have reached there. Turkey saw that the Kurds are creating their own democratic government in Syrian Kurdistan. When there was a war in Kobán, all the Kurds united with each other. Such an association of Kurds is interfering with Turkey and its Sunni Islamist politics in the Middle East. In Koban, the Kurds did not lose but ISIL lost,” Irmak noted.

“The Kurds have also gained weight in the international arena, and this is also making Erdogan wary,” the deputy said.

The second reason for the aggravation is related to the Turkish domestic politics, the deputy believes.

“Erdogan wanted, by promising the Kurds to solve the Kurdish issue using the voice of the Kurds, to introduce a presidential system… Justice and Development Party (AKP, led by Erdogan and Prime Minister Ahmet Davutoglu) has been in power in our country for 13 years. All these years it had promised the Kurds it would solve their issues, receiving votes from them. However, after June 7 (election day in the Turkish parliament in 2015), suddenly everything changed. AKP opened fire against the Kurds. After the June 7 elections, the AKP could not form a government and change the political system,” Irmak further noted.

© REUTERS / Kayhan Ozer/
Erdogan's Deep State: Ankara Creating Monsters in Menacing Power Grab
Previously, many analysts had expressed the view that the previous search for a compromise with the Kurds had pushed Erdogan away from the Turkish electorate. By aggravating the situation, Erdogan has spoiled the image of the AKP being a pro-Kurdish party and mobilized his part of the electorate. As a result, in the by-elections of November 1, 2015 his party AKP improved its results to 49.5 percent from 40.8.

Western politicians have remained silent about the clashes in Turkish Kurdistan between security forces and Kurds, because Europe is dependent on Turkey in solving the refugee problem. Meanwhile, the United States wants to continue using the country’s Incirlik military base, Selma Irmak said.

“Unfortunately, the international community looks indifferent to these developments. Turkey has captured Europe, using refugees from the Middle East as a weapon against Europe, blackmailing it. The US is also silent because it has common interests with Turkey. For example, the United States wants to continue using the Incirlik airport, hence they are silent too. The Turkish Army just gets bolder from such impunity,” the Turkish MP said.

In December, the Turkish government announced a curfew affecting a number of Kurdish regions in south-east Turkey, particularly Sur, Diyarbakir, Cizre and Silopi in Sirnak Province, as well as Nusaybin and Mardin in Dargeçit Province. In Cizre and Sura, street clashes continue between security forces and fighters from the outlawed Kurdistan Workers' Party.