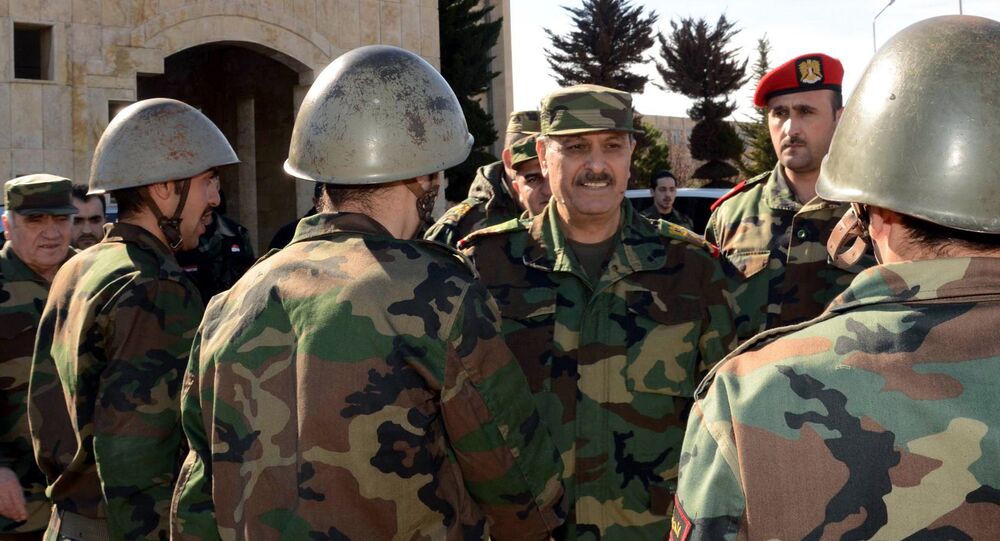 Why does the Syrian Arab Army remain the only force capable of defeating Daesh (ISIL/ISIS) and al-Qaeda in Syria? The answer is that it is resilient and pluralistic; it enjoys wide public support and curtails the spread of terrorism, Kamal Alam, a Syrian military analyst, notes.

© Sputnik / Michael Alaeddin
Race for Raqqa: Why Washington Wants to Capture the City
Despite gloomy prognoses, Bashar al-Assad is still the president of Syria. While Russia and Iran's assistance plays an important role for Damascus, the crux of the matter is the Syrian leader has an army he can rely on and a high level of support in the country.

The Syrian government has long been known for its pluralistic approach toward Syria's numerous religious groups and confessions. The only exception was radical Islamists, for instance, the Muslim Brotherhood.

"When the Syrian opposition talks about a future pluralistic Syria, they fail to realize that while they may theoretically be pluralists in Geneva, Washington and Vienna, their representatives on the ground are allied with the most sectarian terrorist groups the Middle East has ever seen," Kamal Alam, a Fellow at the Royal United Services Institute (RUSI) in London and a Syrian Military Analyst, notes in his article for The National Interest.

While some observers are trying to describe the Syrian crisis as a conflict between Sunnis and Shiites (and Alawis), they apparently forget that the country's military and intelligence chiefs are Sunnis.

© AFP 2021 / Saul LOEB
An Unbearable Burden: Washington at Pains to Resolve Numerous Regional Conflicts
The professional ranks are very strong and religiously pluralistic, the analyst notes, adding that the Syrian Arab Army is also the only Arab army with multiple Christians serving as generals.

Those officers who defected in the beginning of the war were mere conscripts, Alam explains. The backbone of the Syrian Army — about eighty thousand professionals in its ranks — did not betray Damascus.

"It is no secret that the Saudis and Qataris, with full US support, have tried to bribe some of Assad's innermost circles to defect. The all-important professional military cadre of the Syrian Arab Army, however, has remained thoroughly loyal," Alam emphasizes.

In contrast, the so-called "opposition" forces cannot boast of such tolerance. A declassified 2012 Defense Intelligence Agency report released by JudicialWatch.org site debunked the myth of "moderate Syrian rebels" in the region.

The report states that the major driving forces of the Syrian insurgency are the Muslim Brotherhood, al-Qaeda in Iraq (also known as Islamic State/ISIL) and Salafists.

"The fact remains: The moderate Syrian opposition only exists in fancy suits in Western hotel lobbies. It has little military backing on the ground," Alam underscores.

© AFP 2021 / PASCAL POCHARD-CASABIANCA
On Shaky Ground: Will Washington Give Blessing to Saudi Invasion of Syria?
"If you want to ask why Assad is still the president of Syria, the answer is not simply Russia or Iran, but the fact that his army remains resilient and pluralistic, representing a Syria in which religion alone does not determine who rises to the top," he adds.

Today the Syrian Arab Army, loyal to Assad, represents the only force capable of defeating Daesh and al-Qaeda in the region.

Alam cited US influential policymakers Henry Kissinger and Zbignew Brzezinski, who have repeatedly warned the Obama administration that Syrian President Bashar al-Assad has more support than any group that opposes him on the ground.

In November 2015 former British chief of the defense staff General Sir David Richards urged the British government to abandon "contradictory war aims" in Syria and accept that Bashar al-Assad's army is the only credible force that could fight Daesh.

The Guardian quoted Richards who said: "In the areas controlled by Assad it is a functioning government. The dustbins are emptied. We don't want to see what happened in Iraq in 2004/05/06 where it was chaotic because we couldn't manage the aftermath."

He stressed that by toppling the Syrian President Western policymakers would open the door to chaos.