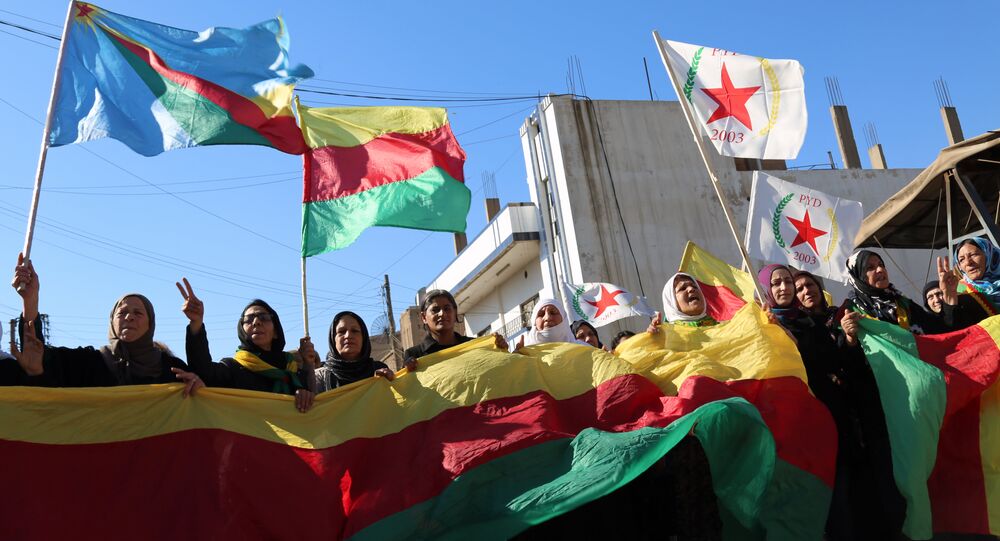 Russia's envoy to the UN office in Geneva (UNOG) said that without the participation of the Kurds, there cannot be any advancement in any points on the agenda of the Syrian talks.

© AFP 2021 / DELIL SOULEIMAN
'They Are Syrian Citizens!': Russia Insists on Kurds' Participation in Geneva Peace Talks
GENEVA (Sputnik) – The refusal to invite the Syrian Kurdish Democratic Union Party (PYD) to participate in the intra-Syrian talks in Geneva was a mistake made by UN Special Envoy on Syria Staffan de Mistura, Russia's envoy to the UN office in Geneva (UNOG) said Wednesday.

"Staffan de Mistura’s decision not to send an invitation for the negotiations to the Syrian Kurdish Democratic Union Party is a mistake. Syrian Kurds are an integral part of the Syrian society, citizens of Syria, and they have the right to participate in determining the fate of their country. Moreover, they are actively fighting ‘on the ground’ with the Islamic State," Alexey Borodavkin said in an interview to the Tribune de Geneve newspaper.

Without the participation of the Kurds, there cannot be any advancement in any points on the agenda of the Syrian talks, he stressed.

"We hope that the UN special envoy on Syria will correct this mistake by the time the negotiations restart. The United Nations and the International Syria Support Group cannot be held hostage by a single state, blocking the participation of the Syrian Kurds in the process — Turkey," Borodavkin highlighted.

© AFP 2021 / ACHILLEAS ZAVALLIS
Syrian Kurds to Continue Working With Russia to Halt Illegal Oil to Turkey
In January, Russian Foreign Minister Sergei Lavrov said the intra-Syrian reconciliation talks would fail to reach a political settlement unless the Syrian Kurds were allowed to participate in the process.

The Geneva talks between the government of Syria and the representatives of the Syrian opposition began on January 29. The UN special envoy said on February 3 that the talks came to a temporary pause. The resumption of the intra-Syrian negotiation process is expected on February 25.

A Seat at the Table: Kurds Could Participate in Syrian Peace Talks