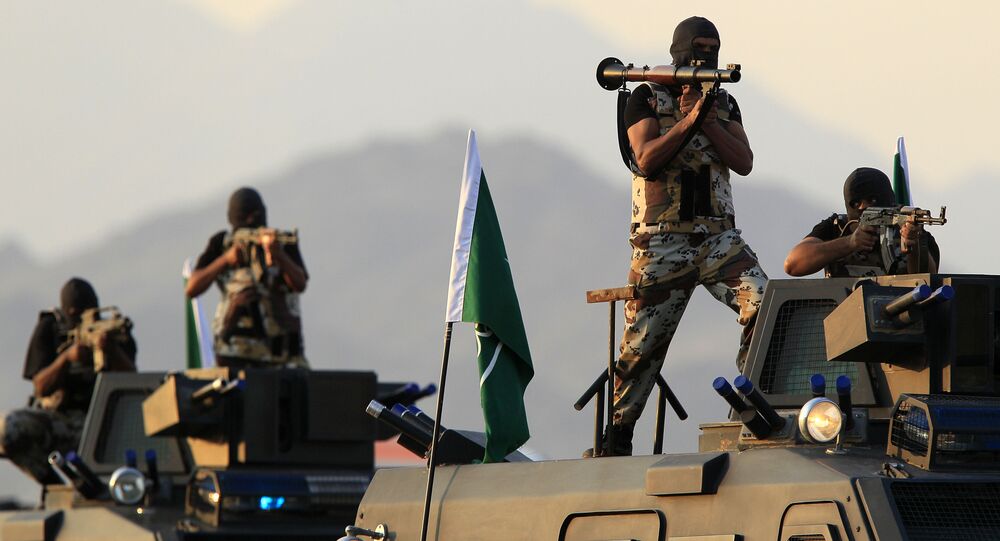 Turkey and Saudi Arabia could send ground forces to Syria in a bid to undo what Damascus-led forces, assisted by Russian warplanes, have managed to achieve in recent weeks at a time when the US-led anti-Daesh coalition desperately needs a major victory to present as a bargaining chip in the Geneva talks, journalist Andrey Polunin asserted.

"Time is working against the US-led coalition," he wrote for Svobodnaya Pressa. "The coalition needs to create an impression that the Syrian crisis was first and foremost resolved due to its efforts, particularly thanks to its strategy that involves changing the regime in Syria."

Polunin added that major stakeholders in the US-led coalition are pursuing their own agenda and fighting Daesh is not a priority for any of them. Turkey wants to tackle the Kurds since it views the ethnic group as the key threat to its security.

© AP Photo / U.S. Air Force via AP
In this image provided by the U.S. Air Force, an F-16 Fighting Falcon takes off from Incirlik Air Base, Turkey, as the U.S. on Wednesday, Aug. 12, 2015, launched its first airstrikes by Turkey-based F-16 fighter jets against Islamic State targets in Syria

For its part, the US political and military establishment wants to "secure its leadership in the world." For this reason, "Washington wants to see the Assad regime gone. There should also be no visible signs of Russia's contribution to resolving the Syrian crisis. Then the US would be able to show who is the key peacemaker in the world," Polunin suggested.

President of the Middle East Forum think-tank Daniel Pipes echoed this sentiment by saying that "others have higher priorities than getting rid" of Daesh. This is the key reason why the terrorist group "has not been destroyed yet."

© AP Photo / Mursel Coban
Turkish, Saudi Ground Operation in Syria Spells Major Trouble for NATO
Many analysts are unconvinced that Turkey and Saudi Arabia will focus their efforts on tackling Daesh should they send their troops to Syria. Furthermore, the Syrian battlefield is already overcrowded and sending more troops will hardly pave the road to peace.

"The last thing Syria really needs is yet more forces and yet more fighting. What we really need to be pushing for is an end of the conflict," Director for the Council for Arab-British Understanding Chris Doyle told Radio Sputnik.

Yet peace does not seem to be on Turkey or Saudi Arabia's mind since the talks in Geneva were suspended last week just days after the formal peace process was launched – not at least due to Ankara and Riyadh's efforts.

"The pause in the Geneva talks is directly linked to the successes of the Russian-led coalition in Syria," Director of the Center for the Study of Strategic Trends Ivan Konovalov told Svobodnaya Pressa. After all, Damascus' victory means the rebels' loss. This in turn is a loss for Turkey and the oil kingdom since they have backed many of the militant groups, who are trying to overthrow al-Assad.

Polunin believes that recent developments "resemble 1945, when our 'allies' were trying to get to Berlin faster than Soviet forces to claim the victory over Nazi Germany as their own."

Why 'Prospect of Turkish Military Invasion in Syria is Very High’