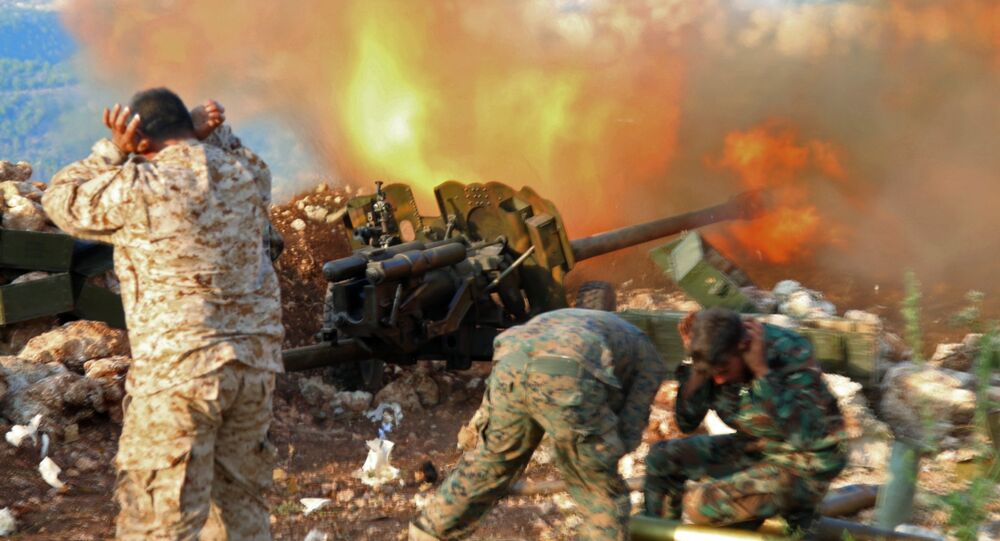 With the help of the Russian Air Force, the Syrian Army will be able to regain Syria's sovereignty, Ghassan Kadi, an expert in Mideast affairs told Sputnik, adding that the prospects of the Russo-Syrian military operation on the ground are good and looking good.

In an exclusive interview with Sputnik, Ghassan Kadi, a Syrian political analyst and expert in Mideast affairs, shared his views on the 100th anniversary of the Sykes-Picot agreement, and the role the Muslim Brotherhood is playing in the Syrian civil war, and the prospects of the Russo-Syrian military campaign

"I believe that with the help of Russia, the Syrian Army will be able to restore sovereignty throughout Syria," Kadi pointed out while answering the question on whether Bashar al-Assad has enough power and political tools to settle the conflict.

"Militarily speaking, the prospects on the ground are good and looking good. If [Recep Tayyip] Erdogan does not take another crazy gamble and does not widen the compass of this military conflict, then at least this phase of fighting Islamism militarily, and specifically in Syria, will probably come to an end soon," the expert told Sputnik.

© AFP 2021 / OZAN KOSE
Turkey's Invasion of Syria? Moscow Keeping an Eye on Ankara's Moves
Kadi's concerns are justified: the Russian Ministry of Defense has recently reported that it "registers a growing number of signs of hidden preparation of the Turkish Armed Forces for active actions on the territory of Syria."

Despite Washington's guarantees to Russia that the US-led coalition forces would follow the terms of Memorandum on Air Safety in Syria, inked on October 20, 2015, Turkey refused to confirm its commitment to the agreement, Russia's Deputy Minister of Defense Anatoly Antonov noted in an official statement.

#Antonov: Turkish military, who are formally included in the US-led Coalition, refused to confirm their commitment to the Memorandum

​Previously, the Turkish Ministry of Defense refused to allow Russian specialists to carry out an observation flight over the territory of Turkey in accordance with Treaty on Open Skies, apparently to conceal illegal military activity on the Turkish-Syrian border.

Meanwhile, on Thursday, Saudi Arabia signaled its willingness to unleash a ground military operation in Syria, followed by statements from Bahrain and the United Arab Emirates supporting the initiative.

In response, Damascus announced that any ground intervention in Syria without the official agreement of the Syrian legitimate democratically-elected government would be seen as an act of military aggression.

The 100th Anniversary of the Sykes-Picot Agreement

US hawks are pressuring the Obama administration into launching an all-out military campaign in Syria and Iraq, and to open a "third" front in the war against Daesh (Islamic State/ISIL) in Libya.

"In a recent article I wrote which has not been published yet, I am predicting that the US will not help Erdogan if he decides to invade Syria and Iraq. If the US is indeed foolish enough to take this step with Russia on the scene, it would be risking a war between the superpowers, a war that will not only have effects on Baghdad and Damascus, but the entire world," Kadi told Sputnik.

"On the other hand, and going back to your first question here, if hopefully such a serious development does not eventuate and Syria and Iraq rise victorious, then it will be entirely up to them to decide their own destiny," the expert underscored.

Indeed, a hundred years ago the destiny of the Arab world was decided in London and Paris: under the notorious Sykes-Picot agreement the Middle Eastern borders were redefined by Europeans against Arabs' will.

Is it fair to say that it was the betrayal of the Arabs by Britain and France back in 1916 that resulted in the Syrian crisis? Or is the current Middle Eastern turmoil a result of a modern-day "conspiracy" aimed at redrawing the borders in favor of neo-colonialists?

"The simple answers to both of your questions are yes and yes, and I am not trying to evade answering your questions as asked, but Arabs must take responsibility for their actions and stop blaming their fate and misfortunes on 'external conspiracies'," Ghassan Kadi stresses.

It is time for the Syrians and the Iraqis to take their future in their own hands and protect their sovereignty, so that they cannot later blame the West or other external powers, the expert pointed out.

© AP Photo / Khalil Hamra
'Moderate' Islamism? Washington, Brussels Playing With Fire in Syria, Iraq
There are lots of conflicts still simmering in the Muslim Arab world, including the Sunni-Shiite divide and violent Islamism. Some groups are fanning the flames to gain more power over their fellow believers.

One glaring example is the Muslim Brotherhood, an international Sunni Islamist organization.

According to a 2012 Defense Intelligence Agency's (DIA) document, the Muslim Brotherhood, along with al-Qaeda in Iraq and Salafists, instigated the Syrian crisis back in 2011 being one of the driving forces of the Syrian insurgency.

What role is the Muslim Brotherhood playing in the Syrian conflict and elsewhere?

"This depends on what you mean by Muslim Brotherhood," Kadi noted.

"If you mean the organization that is rooted in Egypt, and which has later on established bases in the entire Levant including Syria and Lebanon, then one can say that the seemingly placid role that this organization has played created the foundation of indoctrination, which in itself was not violent, but one that lends itself to violence, needing only a tiny mutation," he elaborated.

Remarkably, the Brotherhood played a huge role in the Arab Spring and continues to affect Arab world affairs.

The Islamist group hijacked the revolutionary movement in Egypt in 2011 and temporarily took power in the country. The Brotherhood's traces could be also found in Libya's violent uprising that resulted in the murder of Muammar Gaddafi.

It was a Muslim Brotherhood-led coalition "Libya Dawn" that seized the capital city of Tripoli, Libya, after being defeated in the country's 2014 parliamentary elections, and dragged the country into a protracted political crisis.

Interestingly enough, Turkish President Recep Erdogan has been cooperating with the Brotherhood since he assumed the position of prime minister back in 2003. His Justice and Development Party (AKP) established close ties with Muslim Brotherhood-affiliated parties in the Middle East, including Hamas, and the Brotherhood itself in Libya and Egypt.

© AP Photo / Hassan Ammar
View From Iran: Saudis 'Will Not Dare' to Send Ground Troops to Syria
Furthermore, the Brotherhood boasts a network of officially recognized organizations in Europe, including, for instance, Muslim Association of Britain (MAB) in Britain and Union des Organisations Islamiques (UOIF) in France, while the Federation of Islamic Organizations in Europe is considered to be a grouping of the most important European Brotherhood-led entities.

According to Kadi, the only proper remedy for Islamism and the dangerous divide within the Muslim world is a reform that only Muslims can do.

"There is a huge onus on Muslim clerics from both sides of the divide, to first and foremost reconcile, and secondly to renounce violence and present Islam as it really is, a religion that renounces coercion and violence," the expert told Sputnik.

Daesh's twisted ideology should be treated much in the same vein.

"The terrorist group can be eliminated only when the twisted ideology that feeds it becomes one that all Muslim clerics agree to be deemed as a perversion of Islam. Until this eventuates, if it does, Islamists will continue to embark on a holy transnational project of recruiting Muslim youth with the sole objective of coercing the entire world into either adopting Islam or submission," Kadi emphasized.

"The doctrine of violence cannot be crushed militarily. Nothing will prevent its recurrence or emergence in other parts of the globe other than reform and return to the real message of Islam," he concludes.

Russian Operation In Syria: Turning the Impossible Into a Reality