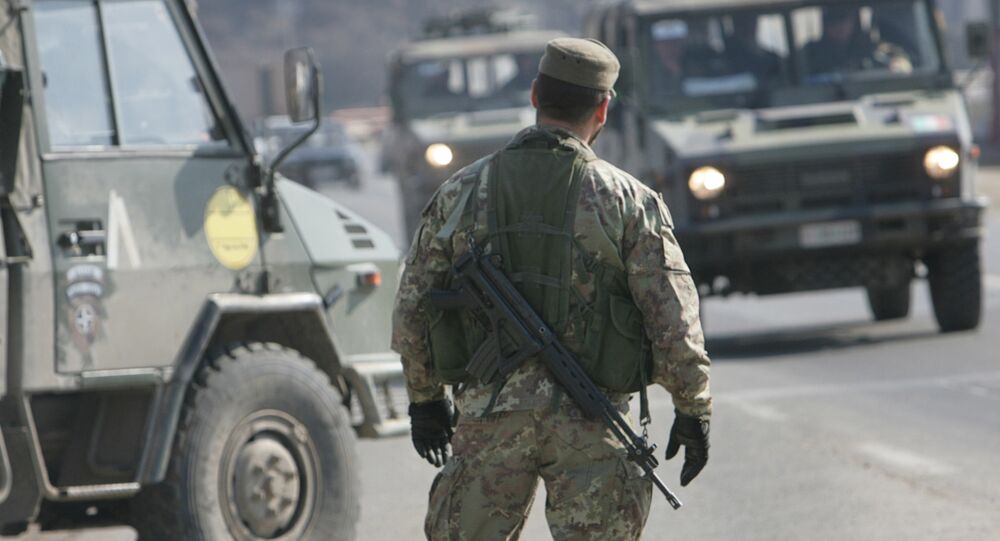 "Twenty or so years after the American 'liberation' of Kosovo forcibly separated it from the former Yugoslavia, the country is a mess. Unemployment is massive: crime is pandemic; and an ultra-nationalist movement, Vetevendosje, is on the rise. Vetevendosje wants to achieve the dream of the old Kosovo Liberation Army: a 'Greater Albania'," Raimondo notes in his article for Antiwar.com.

© AFP 2020 / ANDREJ ISAKOVIC
'Greater Serbia' Architect Reveals Plans for Country's Future
Furthermore, the ultra-nationalists who gained 13.59 percent of the vote in the 2014 Kosovan parliamentary election are calling for unification with Albania.

The idea of Greater Albania is not a new one: it emerged after the defeat of the Ottoman Empire in the Russo-Turkish War of 1877-78. A group of Albanian nationalist leaders met in a Prizren mosque on June 10, 1878 and declared the creation of a "Greater Albania," which aimed to bring together all vilayets (provinces) of the Ottoman Empire inhabited by Albanian nationals.

The concept caught a second wind when Adolf Hitler came to power in Germany. Hitler and his Italian ally Benito Mussolini jumped at the opportunity to engage Albanian nationalists into their political fold.

"Hitler and Mussolini realized the Greater Albania ideology established by the 1878 League of Prizren. Albanian-settled areas of the Balkans — Kosovo-Metohija, western Macedonia, southern Montenegro — were incorporated in a Greater Albania," Carl Kosta Savich, Serbian American historian and journalist, wrote in his op-ed for Serbianna.com.

© Flickr / MyBukit
Kosovo Opposition Threatens to Overthrow Government on Feb.17 – Reports
During the Second World War Albanian nationalists of the 21st Waffen Mountain Division of the SS Skanderbeg unleashed ethnic cleansing of Serbs and Jews on a massive scale, particularly in Kosovo and Bosnia-Hercegovina.

Remarkably, half a century later, in 1998-1999, Washington took the side of the Kosovo Liberation Army (KLA) which was until 1998 on the US State Department's "terrorist organization" list.

While branding Serbs as ruthless "butchers," the White House turned a blind eye to numerous atrocities and crimes committed by Albanian ultra-nationalists in the course of the Kosovo war and after NATO's bombing of Yugoslavia.

Was going through archive at home & found my 1st ever interview for media in #Albania. March '99 & less grey hair:) pic.twitter.com/UD5MCEOff1

​For instance, former Prime Minister and present Deputy Prime Minister and Foreign Minister of the Republic of Kosovo Hashim Thaci (Thaqi), dubbed by US Vice President Joseph Biden as "the George Washington of his country," was involved in kidnapping, force displacement and murder along with other commanders and soldiers of the KLA, according to a 2010 Council of Europe inquiry report.

"In a disgusting display of victor's 'justice,' the leaders of the Serbian resistance to the Albanian onslaught were hauled before the self-styled 'International War Crimes Tribunal' at the Hague — a kangaroo court — and sentenced to long jail terms, while thugs like Thaci were elevated to high office and given millions in US 'aid' to dole out to their Mafia hit men," he elaborates.

The journalist underscores that Kosovo is currently a de-facto "American protectorate in the heart of Europe." At the same time it is also an ultra-nationalist hornets' nest that threatens to undermine the fragile stability of the European continent.