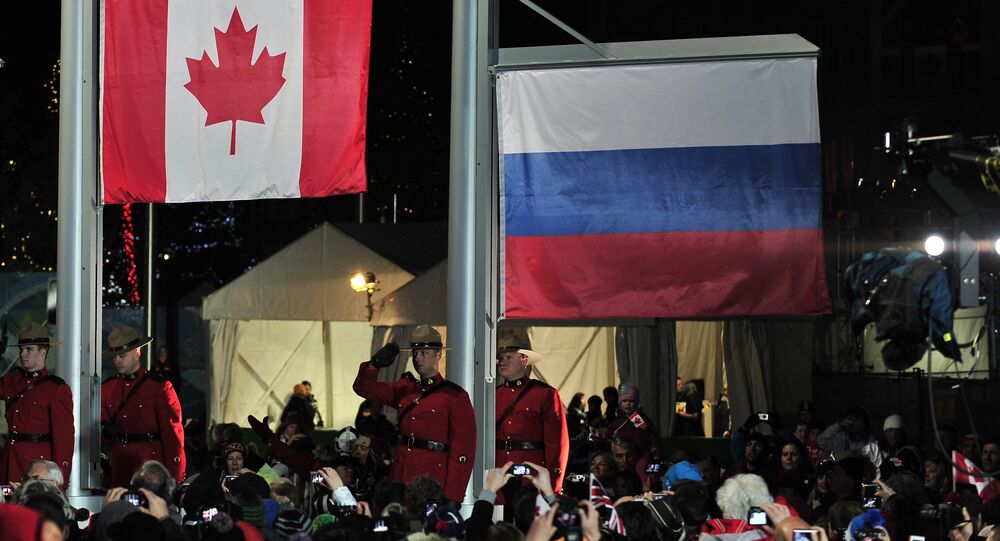 Why the Thaw in Relations Between Russia and Canada is Important

This week, Russian Foreign Minister Sergei Lavrov and his Canadian counterpart Stephane Dion appear to have taken the first steps to thaw the frosty relationship between Moscow and Ottawa. What's causing the thaw, and what lies ahead for the two northern neighbors? Sputnik investigates.

When Justin Trudeau's Liberal Party won Canada's parliamentary elections in October, Russian Canada experts cautiously suggested that the Moscow-Ottawa relationship which had emerged under Prime Minister Stephen Harper in the aftermath of the crisis in Ukraine was in for a serious overhaul.

The Harper government, analysts recalled, often seemed to go out of their way to antagonize Russia, becoming one of the first countries to introduce anti-Russian sanctions, halting Russian-Canadian cooperation in the Arctic, and sending Canadian troops to Ukraine to train the Ukrainian army.

© AFP 2020 / YURIY KIRNICHNY
Finance Minister: Ukraine Seeks Canada's Backing in WTO Dispute With Russia
Moreover, a minor scandal broke out last year after it was discovered that the Canadian Embassy in Kiev was used as a safe haven by the Maidan protesters during their effort to topple the government of Viktor Yanukovych in 2014, leading to accusations that the Harper government had participated in regime change.

Now, with Harper gone and Justin Trudeau, the young and charismatic son of former Prime Minister Pierre Trudeau, taking his place, it seems that a reboot in relations is finally in the offing.

On Tuesday, Canadian Foreign Affairs Minister Stephane Dion told reporters that whatever disagreements Canada and Russia may have, the two countries need to begin a dialogue, focusing on their common interests.

The Francophone minister said that even though Canada would continue to stand with Kiev, at the same time, "we are there to work with Russia when we have common interest."

"That's the policy that we will do step by step in a very cautious way, because we have a lot of disagreements with the government of Russia, but it's certainly not the way to stop to speak with them when the Americans speak with them and all the Europeans, the Japanese, everyone except Canada [does so]," he added.

© AP Photo / POOL / Tom Hanson
Canada Should Resume Dialogue With Russia - Foreign Minister
The foreign minister's remarks served as a response to Russian Foreign Minister Sergei Lavrov, who commented on the prospects for relations between Russia and Canada earlier in the day.

Speaking at the annual Foreign Ministry press conference in Moscow, Lavrov noted that despite the fact that the last two years have been "a period of lost opportunities," the Liberal Party's election signaled hope for improvement.

"When we say that we are ready and open to cooperation with the West, including Europe and North America, we, of course, have Canada in mind as well. We have a good and long-standing relationship with that country," Lavrov noted.

"Canada," the foreign minister said, "is an influential and respected member in international relations. We are facing largely common challenges and common interests with regard to the development of the Arctic and cooperation in the north, and good experience of practical cooperation in a number of areas: economy, trade, and the north. There have been ups and downs in our relations, but in the end, common sense invariably prevailed."

"The fact that the Liberal Party led by Justin Trudeau won elections in October is certainly an important event, especially for Canadians," Lavrov emphasized. "Based on the comments on foreign policy provided by Trudeau and his colleagues, we can expect opportunities to set our bilateral relations, which had previously been artificially and pointlessly complicated, straight."

© REUTERS / Ezra Acayan
New Canadian Government Gives Hope to Improve Russia-Canada Bilateral Ties
Commenting on the impromptu exchange between the foreign ministers, Vladimir Vasilyev, a senior research fellow at the Institute of US and Canada Studies at the Russian Academy of Sciences, said that Dion's comments reflect the new attitude of the Trudeau government, not just toward Russia, but toward its southern neighbor, the US, as well.

Speaking to Russian business newspaper Vzglyad, Vasilyev suggested that it all comes down to the election results. "The Conservatives are out and the Liberals came to power. In this regard, the new Canadian government is looking for some common ground with Moscow."

At the same time, the analyst noted, the timing of the shift in tone may be connected to recent statements coming out of Washington. "In particular, US Secretary of State John Kerry had said at Davos that the sanctions are not working. Canada may be the first country to have grasped this fact."

"Under the Conservatives, Ottawa moved in the shadow of American foreign policy. Now, the new government is trying to show that it is different from its predecessors not only in domestic policy, but in foreign affairs as well. This means that we could expect these kinds of statements to continue."

More than anything, Vasilyev suggests, Canada's new government is focused on domestic economic development. "Sanctions were imposed against Russian oil and gas companies engaged in explorations, including in the Arctic…Canada, for its part, to a larger extent than the US, is interested in the development of Artic resources."

© AFP 2020 / NICHOLAS KAMM
Canada Supports Anti-Daesh Coalition Despite Refusal to Participate in Airstrikes
Ultimately, the analyst notes, the fact that the two countries are searching for a normalization in relations, in spite of the conflict in Ukraine, indicates that "the differences on this issue are not an obstacle for the development of economic relations."

"In Canada, there is a growing understanding that the Ukrainian economic crisis is much more serious [than previously anticipated]. They could now be thinking that attempts to link the question of Russian-Canadian relations to Ukraine is doubly harmful. Canada, supporting Ukraine politically, is not getting anything in return, apart from the influx of immigrants from that country. This is a one way street, and a loss for the Canadian economy," Vasilyev concludes.