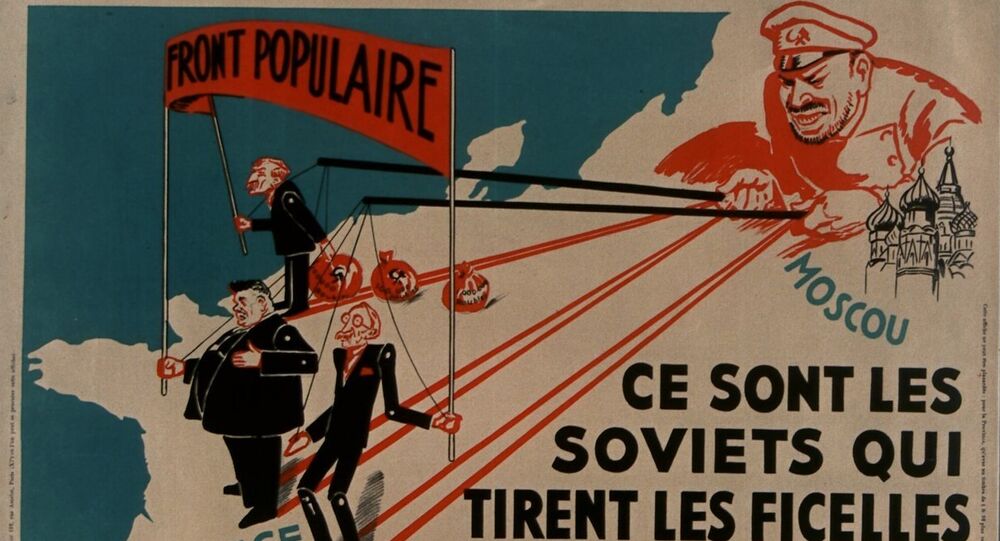 Recently, US Director of National Intelligence James Clapper was instructed by Congress to conduct a review of Russia's alleged 'infiltration' of European political parties, and supposed attempts to influence politicians and European society at large; Russian policy analysts couldn't hide their amusement.

Wikipedia / National Library of Australia
US Intelligence Chalks Up Washington's Declining Influence in Europe to 'Russian Spies'
Earlier this month, reports surfaced that the US intelligence community would be conducting a "major investigation" into alleged Kremlin schemes to influence European politics.

Washington, the reports suggested, has been growing increasingly concerned over Moscow's supposed use of clandestine influence to undermine NATO, US missile defense, and Europe's anti-Russian sanctions policy.

What are these secret operations? According to The Telegraph, they include the funding of political parties, charities, and NGOs, contacts between European politicians and their Russian counterparts, and attempts to stir up trouble by 'deploying arguments' which are said to reflect positions "'closely resembling' known Russian propaganda."

European lawmakers' visit to Crimea, for example, is considered suspicious, and warrants further investigation. So does the Netherlands' upcoming referendum on ratifying the EU-Ukraine Association Agreement. Even Jeremy Corbyn's election to the Labour leadership in the UK, the newspaper notes, is troubling, all because the 'Kremlin-controlled' TV channel RT gave positive coverage of the politician's election.

Independent Russian online newspaper Svobodnaya Pressa decided to gauge the reaction of Russian foreign policy experts on the impending US investigation into the alleged Kremlin machinations behind all of Europe's anti-American or independence-minded political forces.

Alexander Shatilov, the dean of the faculty of Sociology and Political Science at Moscow's Financial University, told the newspaper that the fact that the inquiry is to be conducted in all seriousness could indicate that "Washington is waging an all-out campaign for the preservation and strengthening of US control over the Old World."

In doing so, it seems, the US "is not willing to shy away from any means, from attempts to discredit certain relatively independent politicians (it's enough to recall the sex scandal surrounding French politician Dominique Strauss-Kahn, the former nominee for the post of IMF managing director), to region-wide provocations, such as the South Stream pipeline debacle and the Middle Eastern and African migrant crisis."

© Sputnik / Grigoriy Sisoev
Russian Red Scare No Longer Works
The intelligence investigation, Shatilov suggests, basically "amounts to an attempt by the Americans to 'clean out' any European political forces which are more-or-less oriented toward Russia, or even simply opposed to the aggravation of a confrontation with Moscow."

Unfortunately, the analyst notes, "none of this comes as a surprise to anyone in the Western democracies, with the US, in the quarter-century since the disintegration of the Soviet Union, selling the public on the idea that Washington has national interests across the entire globe, and that they are free to 'correct' the political course of governments as required."

"The US does not hide the fact that it wants to impose its Transatlantic Economic Partnership project on the EU. But if the elite of the Old World proves to be uncompromising, Washington can rustle up another couple million migrants from somewhere" to push its interests through.

The truth, Shatilov suggests, is that "the Russian leadership certainly understands the processes taking place in Europe, and naturally is trying to somehow influence them, because this is a region of great importance for us. We do our best to counter US influence in the Old World, but, speaking honestly, have so far achieved only local successes."

For a number of reasons, the analyst notes, from financial resources to history to mentality and values, Washington's ability to influence the EU is much stronger than Moscow's. However, even though Russia's real ability to influence European policy on the strategic level is limited, "still, the United States considers Russia's efforts 'provocative' and 'dangerous'. For this reason, it is entirely possible that they will begin a witch hunt in Europe, directed not even against our allies, so much as against those who are simply willing to work with us."

When asked why, in a situation where Washington's influence over Europe significantly exceeds Moscow's, the US nevertheless insists on crushing whatever pro-Russian enemies, real or imagined, it has left, Shatilov suggested that "historically, American policy has had a 'cowboy character'; that is, hitting your opponent with so many blows that he won't soon recover, if he recovers at all. In this way, it's possible that Russia may have something to learn from the Americans, in order to better defend our own national interests."

© AFP 2020 / BULENT KILIC
'Shadow CIA' Explains How US Can 'Force' Moscow to Negotiate With Ankara
However, there is another possibility, the analyst notes. The impending investigation could be the result of a genuine fear that Europe may slip away from Washington's orbit. "The US is observing the state of chaos which has hit Europe due to the influx of migrants. They did not expect that European leaders would behave in such a passive manner."

"Against this background, a factor emerges which they might not have taken into consideration: Namely, the fact that among Europeans, there is a growing call for a charismatic leader – one who would not simply blindly follow Washington's instructions, but pursue an independent policy, and perhaps one which would in some ways be 'pro-Russian'. Or it is possible that Russia's conservative values may seem attractive to many Europeans against the backdrop of the worsening problems with migrants." In this situation, the US intelligence investigation may be a way "for Washington to hedge its bets," Shatilov suggests.

Like his counterpart, Ivan Konovalov, the director of the Moscow-based Center for Analysis of Strategies & Technologies, finds the suggestion that the Kremlin is engaged in an extensive campaign to manipulate pro-Russian forces in Europe ridiculous.

"We have enough problems in the former Soviet Union and the Middle East. The US is actively promoting the idea of a Russian hybrid war against the West. In such a framework, the idea of Russian subversion of the EU fits quite nicely," the analyst told the newspaper.

© AFP 2020 / AMC / FADI AL-HALABI
An Uncomfortable Truth: Washington Caught Supporting Jihadists in Syria
Ultimately, Konovalov noted, "supporting 'influence groups' in neighboring countries is a normal phenomenon for any strong country. By the way, the situation in Ukraine with the Maidan coup showed that Russia did not have sufficient influence even over a country which is so close to us. Even though we spent a great deal of money to attempt to ensure their loyalty [through subsidies on energy prices, for example], in the end it turned out that we supported the wrong people and for the wrong reasons. At the same time, the Americans, at a much lower cost, achieved far greater success in Ukraine."

In any case, the analyst concluded, it's pretty hypocritical for Washington, which operates an extensive network of political influence operations across the entire globe, to accuse Moscow of doing the same thing at the European level.

US Intelligence Chalks Up Declining Influence in Europe to 'Russian Spies'