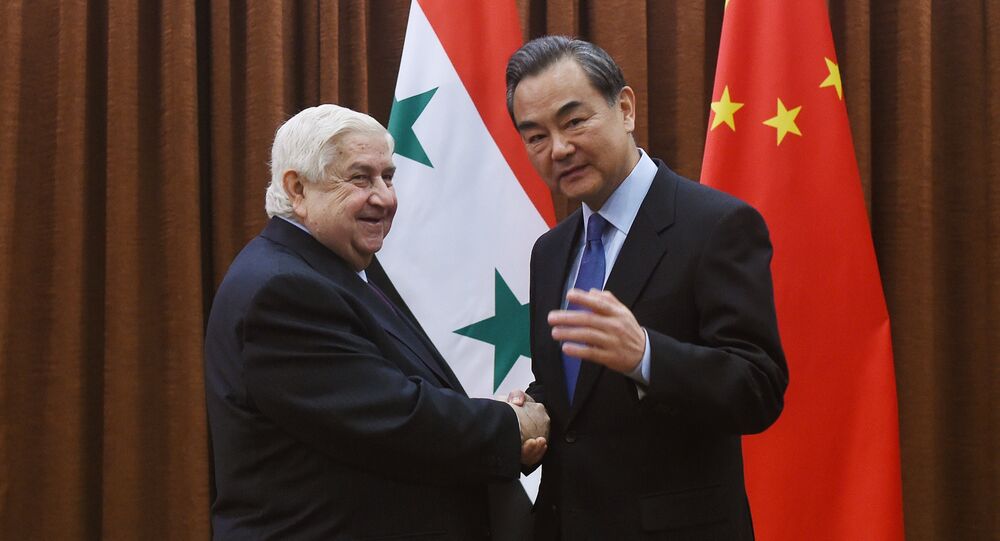 Ahead of the Geneva talks on Syria, China's deep diplomatic involvement in the Middle East is somewhat of a novelty, Berlin-based political analyst Moritz Rudolf stresses.

© AFP 2020 / JOSEPH EID
To 'Degrade and Destroy': Hidden Flaws in Pentagon's Syria Strategy
Although China is far removed from the Syrian conflict, it has recently taken diplomatic steps toward mending the crisis, Moritz Rudolf, Research Associate at the Mercator Institute for China Studies (MERICS), points out, adding that Beijing's move has come as a surprise.

"On December 24, China's Foreign Minister Wang Yi hosted his Syrian counterpart Walid al-Moallem in Beijing. Shortly thereafter Khaled Khoja, the president of the National Coalition for Syrian Revolutionary and Opposition Forces, arrived on January 5 for a multi-day visit," Rudolf writes in his piece for TheDiplomat.com.

"It is a novelty for Beijing to be so diplomatically active in the Middle East… Beijing had never before gone beyond making rhetorical calls for a peaceful solution, explaining its reluctance to engage out of respect for Syria's sovereignty," the analyst adds.

© AP Photo / Reza Shirmohammadi, File
Daesh Could Inadvertently Unite Afghanistan, Pakistan and Beyond
What lies beneath Beijing's decision to pursue a more active diplomatic approach in the Middle East? There are a number of reasons, according to Rudolf.

First and foremost, though Syria itself is "mostly irrelevant as a trading partner" for Beijing, the region's stability does matter for the Chinese leadership: the ongoing crisis threatens the China-led $900-billion New Silk Road infrastructural project, which is supposed to connect Asia, the Middle East, Africa, and Europe.

On the other hand, Beijing fears that Daesh (Islamic State/ISIL) could reach China. In early December 2015 Daesh released a propaganda video in Mandarin Chinese urging Chinese Muslims to "wake up" and join the jihad.

"According to official sources in Beijing, there were numerous terrorist attacks in China with an Islamist background in 2014 and 2015. A strict new Chinese counterterrorism law, which came into force this year, underscores the leadership's terrorism fears," Rudolf elaborates.

SCO Host Photo Agency
New World Paradigm: Russia, Iran and China Make a Strong Team
And still it is only a part of the story: there is yet another reason for Beijing's unusually deep involvement in Syria's affairs.

China's policymakers view the Syrian peace process as an opportunity for Beijing to broaden its experience in dealing with multilateral global crisis management and conflict mediation, the Berlin-based analyst suggests.

The ability to "shape resolutions" in multilateral negotiations will allow Beijing to gain the status of a global power.

"In pursuit of this vision, Chinese diplomats are now involved in more international negotiations than ever before," Rudolf emphasizes, referring to Beijing's recent diplomatic efforts in Afghanistan, Iran and Saudi Arabia.

"The international community should identify an increasing number of appropriate channels to include China in managing global security," the analyst underscores, expressing concerns over Beijing's ability to foster parallel security structures.