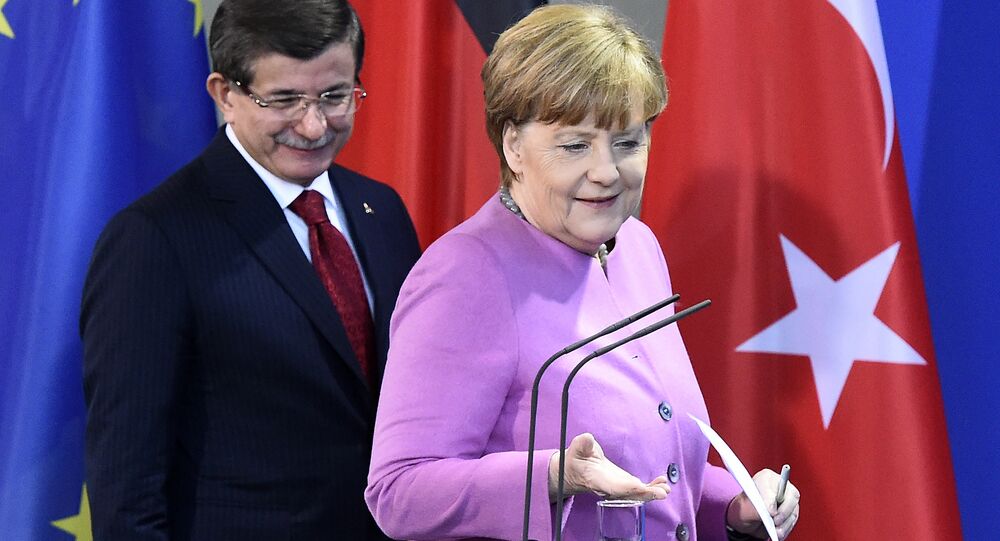 During talks in Berlin, Turkish Prime Minister Ahmet Davutoglu tried to persuade German Chancellor Angela Merkel to turn away from Russia’s stance on the Kurdish issue.

© AP Photo / Armin Weigel
Bottomless Pit? Germany to Increase Aid to Turkey in Tackling Refugee Crisis in 2016
Germany has already eased its criticism of Turkey for persecuting Kurds. The point now is that Ankara should be responsible for curbing the migrant influx to Europe which has already provoked a political crisis in the EU.

On Friday, Davutoglu met with Merkel to discuss the migrant issue. Turkey is said to be one of the main "suppliers" of refugees to Western Europe. Now, there are over two million refugees in Turkey, and many of them will travel further to European countries. Germany is the most popular destination amongst migrants. In 2015, 1.1 million migrants crossed the German border.

Thus, the migrant issue is the main leverage Ankara is using to pressure Berlin. First of all, Ankara is trying to figure out when it will receive the €3 billion the EU has pledged to use to improve the living conditions of migrants in Turkey. Italy has blocked the plan, and Davutoglu did his best to show Merkel that Ankara's patience was running out.

In addition, at the talks in Berlin the prime minister tried to discuss the issue of easing the visa regime between Turkey and Germany as well as giving a fresh impetus to the talks on Turkey’s admission to the EU.

© REUTERS / Bulent Kilic/Pool
Keep It Coming: Turkey Wants More EU Money to Tackle Refugee Crisis
Meanwhile, Turkish-German ties currently are marred by the Kurdish issue. Ahead of the meeting, Davutoglu underscored at the forum in Davos that Turkey is against the participation of Kurdish groups in the Syrian peace talks. Supporting the Kurds, Russia is hampering the negotiations, he added.

This might have sounded like a hint to Berlin. Germany maintains close ties with the Kurds in Iraq. According to Die Welt, before the meeting between Davutoglu and Merkel, the German government had to end criticism of Ankara’s policy toward Kurds. This concession proves that the Kurdish issue is not that important for Merkel’s cabinet which is losing popularity amid the ongoing migrant crisis.

Both Russia and Germany consider Kurds an important force taking part in the fight against Daesh. Kurdish Peshmerga militia forces have proved their efficiency in fighting Daesh, not on a sectarian or political basis, but rather for territorial disputes.

Daesh has been trying to establish a "caliphate" across Syria, Turkey and Iraq which has been claimed by Kurds as their own land – Kurdistan, which in their long-term perspective should be an independent state. For Russia and Germany, the Kurds’ push for independence does not constitute a problem, however, for Turkish President Recep Tayyip Erdogan, he wants to save the southern part of the country by any means possible.

This is why weakening Kurdish militants in Iraq or Syria is one the main goals of Turkey’s policy in the region, Vladimir Evseyev, an analyst at the Institute of CIS Countries, told Gazeta.Ru.

German has officially supplied weapons to Iraqi Kurdistan. In addition to EU-made firearms, Kurdish fighters in Iraq use Franco-German MILAN anti-tank systems against Daesh. Media also has reported that Kurds sell some of these German weapons, so it is impossible to control who would receive European weapons.

"There have been reports that Russia is supplying weapons to Kurds in Syria," the analyst said. "But even if they are true Russia is delivering only small amounts of arms to Kurds. Moscow knows that Ankara can take measures in response, including destabilizing situation in Nagorny Karabakh or escalating the Tatarian issue in Crimea."

Nevertheless, Russian airstrikes launched in September 2015 already have foiled Turkey’s ambitious anti-Kurdish initiative. Before the operation started Ankara was planning a "safe zone" in northern parts of Syria. It was planned that pro-Turkish militants would receive support and regroup there. Unlike the US, Russia could not guarantee observing the safe zone so Ankara finally abandoned the idea.

© REUTERS / Rodi Said
Ankara's Whim: Will Turkey Jeopardize Syria Peace Talks if Kurds Come?
Germany is also being pressured by the pro-Kurdish wing. Ahead of Davutoglu’s visit, some 100 artists and scholars addressed to Merkel in an open letter, urging Berlin to condemn the persecution of Kurds by Turkey.

The Russian Foreign Minister reacted to the situation bu saying that the ongoing military operation against the Kurds in Turkey is raising deep concerns.

The talks were held in the format of "government consultations" which are used to discuss the most important issues with Germany’s closest allies. The meeting with Davutoglu was the first time Germany had held government consultations with a Turkish official. The results of the talks will be seen on January 25-29 when the Syrian peace talks are scheduled in Geneva.