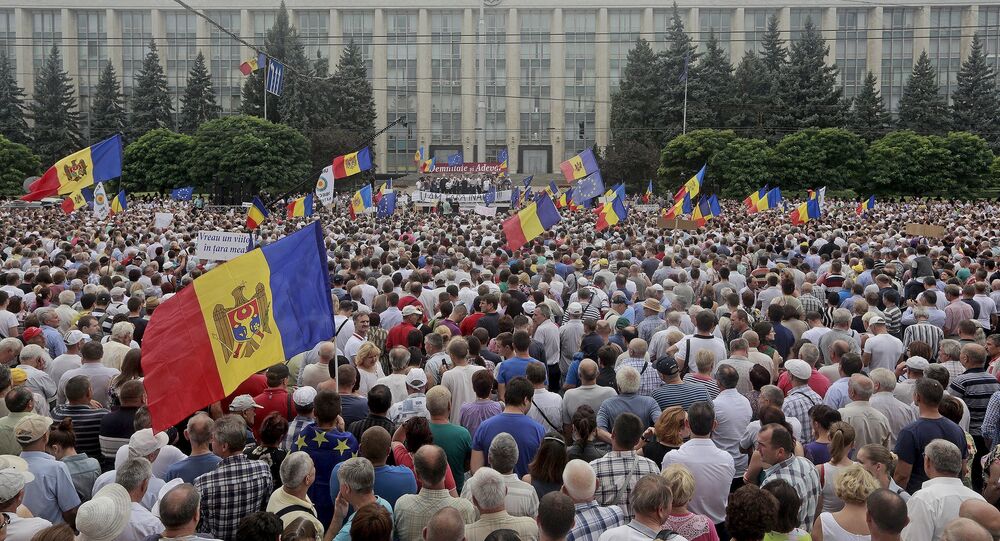 The European Union has called all responsible parties in Moldova to engage in dialogue, as its capital of Chisinau was engulfed in protests after the country's parliament approved a new government on Wednesday, a European Commission External Service spokesperson said.

BRUSSELS (Sputnik) – Earlier in the day, the activists gathered at the parliament to protest the decision by Moldovan President Nicolae Timofti to nominate Pavel Filip, the minister of informational technologies and communications and member of the Democratic Party, to the position of Moldovan prime minister. Hundreds of protesters broke into the parliament building.

"Following today's vote for a new government in the Moldovan Parliament and ensuing demonstrations, the European Union calls for calm and restraint from all sides. We encourage all stakeholders in the country to engage in a dialogue and find, together, a way forward for the Republic of Moldova."

​According to the statement, EU foreign policy chief Federica Mogherini is in close contact with the European Union’s delegation in Chisinau, and is following the situation closely.

Since early September 2015, major anti-government protests have gripped the Moldovan capital of Chisinau. Activists have been demanding the resignation of the Moldovan president, the prime minister and the chief prosecutor, while also calling for early parliamentary elections and prompt action to tackle corruption.

​In October, the Cabinet of Ministers of the country headed by Valery Strelet was dismissed. Moldova entered into the year 2016 with no acting government against the backdrop the deep political crisis.

According to the Constitutional Court, the lawmakers were to approve the new government until January 29, otherwise, the parliament might be dissolved.

Over 20,000 Protesting Against Proposed Moldovan PM Candidate in Chisinau