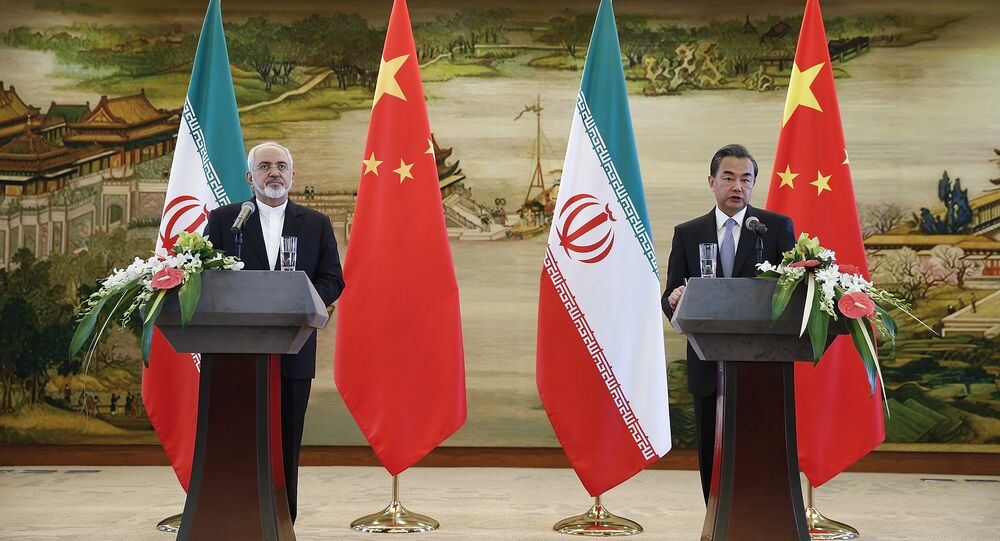 American observers are keeping an eagle eye on Chinese President Xi Jinping as he conducts his five-day tour of the Middle East, which includes stops in Saudi Arabia, Egypt and Iran. For their part, analysts speaking to The Washington Times warned that Beijing may be pushing to supplant Washington's influence in the region.

© Fotobank.ru/Getty Images / SeongJoon Cho
Sino Diplomacy: Why Xi Jinping's Middle East Trip Matters Amid Regional Tension
With relations between Beijing and Riyadh anchored by Saudi Arabia's extensive oil exports to China (totaling 1/6 of China's overall imports), it is Xi's visit to Tehran, scheduled for the end of his trip, which has analysts worried. This will be the first visit by a Chinese leader to Iran in nearly a decade and a half, and comes right on time for Beijing, the newspaper suggests.

"The trip comes just days after the lifting of international sanctions on Iran under the Obama administration-backed nuclear accord that went into effect over the weekend, and analysts say Beijing is eager to get in on the ground floor as the Iranian government scrambles to end its diplomatic isolation and ink deals with foreign investors," The Washington Times writes.

Furthermore, with tensions between Riyadh and Tehran on the rise, "some believe Mr. Xi's goal is to promote a message that both Riyadh and Tehran would be wise to embrace China – not Washington – as the partner of the future."

Patrick Cronin, senior director at the Asia-Pacific Program at the Washington-based Center for New American Strategy, told the newspaper that with the US "increasingly seen as no longer dominating regional politics," Beijing "wants to be perceived as the growing power that can restore order to a muddled Middle East."

"Right now US policy toward the region seems totally upside-down because we're pursuing peace with Iran and alienating our friends – the Saudis, Israel and others as well – and China is swooping in to cash in on that vacuum of power," the analyst explained.

© Flickr / Trey Ratcliff
Courting Arab World? China Building 'Silk Road' to the Middle East
Moreover, Cronin suggested, with the US perceived to have "lost a lot of traction, if not credibility," Beijing "is ready to be seen as the neutral outside power that can reduce tension and advance development."

"There are bargain-basement deals to be made here. Iran wants some kind of deal. Saudi Arabia wants a deal. China can swoop in and leverage its political power to drive a bargain and negotiate with either of them," the analyst said.

Even as Chinese economic growth cools, The Washington Times notes, its demand for oil, and for new markets for its goods, will not. Oil and markets, the paper suggests, are "two things that analysts say Mr. Xi will have in the front of his mind during his Middle East visit."

Furthermore, unlike Russia, which recently joined the battle against terrorism with a military mission in Syria, China's activist approach, the paper notes, will center on economics. "As a result, where Moscow is seen to have aligned itself more closely with Iran than Saudi Arabia, Beijing has avoided taking sides."

Still, there are "signs [that] the Chinese aim to grow a military footprint in the region, since it was revealed in November that Beijing is building its first-ever foreign naval outpost in the East African nation of Djibouti. It's unclear how the base, which officials claim is for providing logistics support to Chinese anti-piracy patrols around the Horn of Africa, will ultimately fit into China's overall Middle East policy."

© AFP 2020 / POOL / Guang Niu
China's Power Play in Djibouti: First Step to Great Naval Power Status?
Ultimately, the paper suggests, Beijing's "long-term strategy appears to center on trying to fly above the region's divisions by using China's economic heft to promote development and investment deals with anyone who wants them."

However, speaking to Deutsche Welle, Zhiqun Zhou, the director of Bucknell University's China Institute, warned that there may be limits to the Chinese approach.

"President Xi is likely to emphasize China's policy that disputes need to be resolved peacefully through dialogue. However, anyone hoping that China will serve as an honest broker to bring the disputants together will be disappointed," Zhiqun told the German broadcaster.

Nevertheless, China's efforts to court the region with its Silk Road initiative, and the associated oil and gas pipelines, high speed rail, and other infrastructure projects, are sure to gain Beijing leverage vis-à-vis the United States.

And this is something that Washington must sit up and take note of, Cronin suggests. "We need to be advancing a serious dialogue with our key partners and allies about China's role in the Middle East, and engaging them to think about what is the most constructive role for China and what would be a negative role that undermines security."