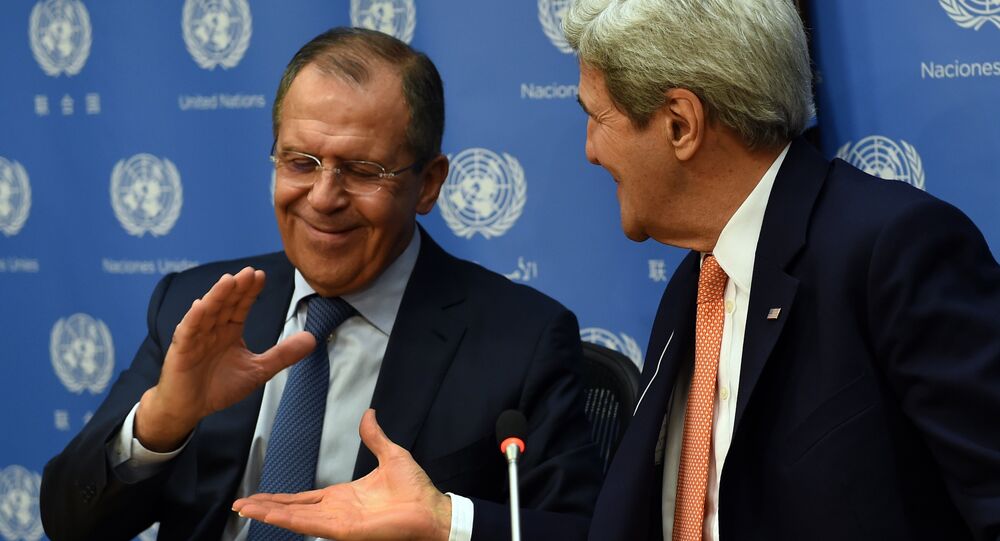 Russia is ready for closer cooperation with the United States on humanitarian issues and the fight against terrorism in Syria, Russian Foreign Minister Sergei Lavrov said Wednesday.

"We reaffirmed the need to address humanitarian issues in Syria, we talked about how our Aerospace Forces plan their operations, taking into account all humanitarian programs implemented in Syria by the UN, the International Committee of the Red Cross and other non-governmental organizations," Lavrov told reporters following a meeting with US Secretary of State John Kerry.

"We said that we are ready for closer coordination of actions with the US-led coalition in this direction, but the most important thing we talked about was coordination of anti-terrorism actions," he added.

Minsk Deals Should Not Be Rewritten

Washington agrees with Moscow that the Minsk peace agreements must not be rewritten, Russian Foreign Minister Sergei Lavrov said Wednesday following talks with US Secretary of State John Kerry.

"The Minsk agreements are not subject to any kind of interpretation. There, absolutely necessary steps are written down, which must be taken primarily by the Ukrainian government and the militia, and which should lead to a settlement of the whole situation through dialogue between Kiev and Donbas," Lavrov told reporters.

© AP Photo / Fernando Vergara
Lack of Election Law in Ukraine Blocking Minsk Progress Claims German FM
"I assure you that there is, of course, a need to search for compromises, but on how to implement what is outlined in the Minsk deals, not about these deals being rewritten. And this is an opinion we share with our American partners," he added.

The United States also vows to stick to the Normandy and Trilateral Contact Group formats for Ukrainian peace settlement, rather than introducing new negotiation formats, according to the Russian minister.

"The key long-term task, on which the final settlement will depend on, is the political process," Lavrov underscored.