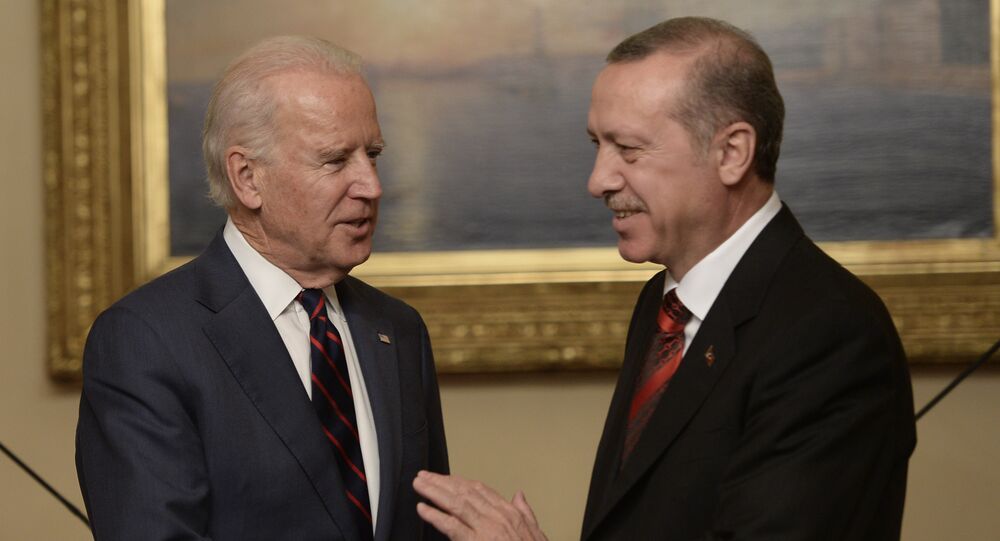 In its latest report on how Washington might 'manage' the crisis in the Middle East, US intelligence firm Stratfor suggests that in the interests of crushing Daesh, the US will have to have to try and force Russia and Turkey to reach an agreement over Syria.

© Sputnik / Andrei Stenin
Syria 2016: Will The War End or Escalate?
If the US wants to destroy the threat of Daesh (ISIL/ISIS) terrorism in the Middle East once and for all, "the discussion begins and ends with Turkey," Stratfor suggests. Specifically, Washington will have to attempt to force Russia to the negotiating table with Turkey on managing the Syrian crisis, using the veiled threat of increasing NATO's presence in the Black Sea.

However, the think tank cautions, "the chief complication is Russia. Following the November downing of a Russian warplane by Turkish forces, Russia's air defense buildup in Syria, paired with a direct threat to shoot down any aerial targets that could threaten Russian aircraft in Syria, has complicated Turkey's military planning."

© Sputnik / Dmitriy Vinogradov
Russia's Air Onslaught in Syria Forces US, Turkey to Scale Back Their Ambitions
And maybe that's for the best. Perhaps Stratfor's strategic brainstorming hasn't left much time to check the news, but the reality on the ground, as Syrian Kurdish commanders on the frontline in the fight against Daesh have repeatedly complained, is that Turkish army and intelligence operations in their country seemed to have focused all their their energies on attacking Kurdish forces and providing support for 'moderate' rebels including al-Qaeda affiliate al-Nusra Front and Ahrar ash-Sham, instead of fighting Daesh.

Meanwhile, the Kurdish People's Protection Units (YPG) militia groups operating in northern Syria have played a crucial role in hindering Daesh's oil trade through Turkey and have succeeded in disrupting the flow of vehicles, fighters, and weapons to the jihadists via the porous Turkish-Syrian border.

In fact, according to some experts, including Center for Middle East and Central Asian Studies director Semyon Bagdasarov, the Russian-supported Syrian Democratic Forces (an alliance of Kurdish, Arab, Assyrian and other militias operating in northern Syria) may very well push Daesh out of their capital in Raqqah, and even close the Syrian-Turkish border, before the year is out, and without any 'Turkish help'.

Anyway, back to Stratfor's analysis. "The United States," the think tank says, "which has established rules of engagement with Russia for the Syrian battlefield, has taken it upon itself to try to work out a similar understanding between Turkey and Russia and to get the battle plans in motion again."

© AP Photo / Burhan Ozbilici
Turkey Must Have Major Influence on Syrian Peace Process
Secretary of State John Kerry's visit to Moscow in mid-December, Stratfor suggests, was "an attempt to facilitate a dialogue between Turkey and Russia. Kerry will meet again with Russian Foreign Minister Sergei Lavrov on January 20 in Zurich, where the topic will probably come up again."

As for the next leg of the Syrian peace negotiations, scheduled to be held in Geneva on January 25, the think tank argues that "on the Syria matter, Turkey plays a crucial role in bringing the rebel factions it sponsors to the table (while trying to keep Kurdish factions out of the negotiation altogether), and Turkey and Russia's frosty relationship only adds to the complications afflicting the Syrian negotiation."

Relations are frosty, but how can they be anything else, after Turkey downed a Russian bomber, over Syrian airspace, which was engaged in the fight against Daesh? Moreover, with Turkish officials making grand declarations that "no country has more to say on these peace talks than Turkey," while simultaneously engaging in operations against the very forces attempting to smash the terrorists, it's unclear how else Russia is supposed to react.

© Sputnik / Mikhail Voskresenskiy
Will Damascus's Regional Enemies Attempt to Use Their Proxies to Disrupt the Syrian Peace Talks?
In fact, the biggest problem, some Russian experts warn, is that the Geneva negotiations might not even get off the ground. In a recent analysis, geopolitical analyst Gevorg Mirzayan suggested that the series of tactical military and diplomatic victories recently enjoyed by the Syrian government and its allies may lead Damascus's opponents (Turkey, Saudi Arabia, and Qatar) to attempt to break off the talks altogether, using their proxies among opposition fighters.

Ultimately, Stratfor suggests, Washington might "get Moscow's attention" and force it to the negotiating table with Ankara over Syria by compelling Turkey to "increase the size and frequency of naval rotations in the Black Sea," within the limits of the Montreux Convention on the Turkish Straits.

Recalling US Assistant Secretary of State for European and Eurasian Affairs Victoria Nuland's ongoing tour of Eastern Europe and Turkey, where she has pushed "security proposals to underscore the US security commitment to Central and Eastern Europe," Stratfor notes that the economic squeeze presently faced by Russia means that "Moscow would not take a larger NATO encroachment on these two fronts lightly."

"At the end of this week, Nuland will join US Vice President Joe Biden in Turkey and hold high-level talks with Turkish leaders. The United States could use this opportunity to try to bring Ankara back into dialogue with Russia over Syria. It could also use the occasion to feel out Turkey's position on NATO's Black Sea security. If Moscow feels its hostile relationship with Turkey has pushed Ankara too far toward its NATO allies, Russia could resume a dialogue with Turkey, making a compromise in Syria possible."

In other words, Stratfor seems to argue, Washington could force Moscow to compromise on Syria by threatening a buildup in the Black Sea. But with Turkey already demonstrating what such a 'compromise' would entail (i.e. attacks against Syrian Kurds and support for anti-Assad rebels), the only question the think tank should be asking itself is: How likely is Russia to abandon its regional ally for the sake of a flimsy verbal guarantee from a Western military alliance which has broken almost every promise it has ever made to Moscow?