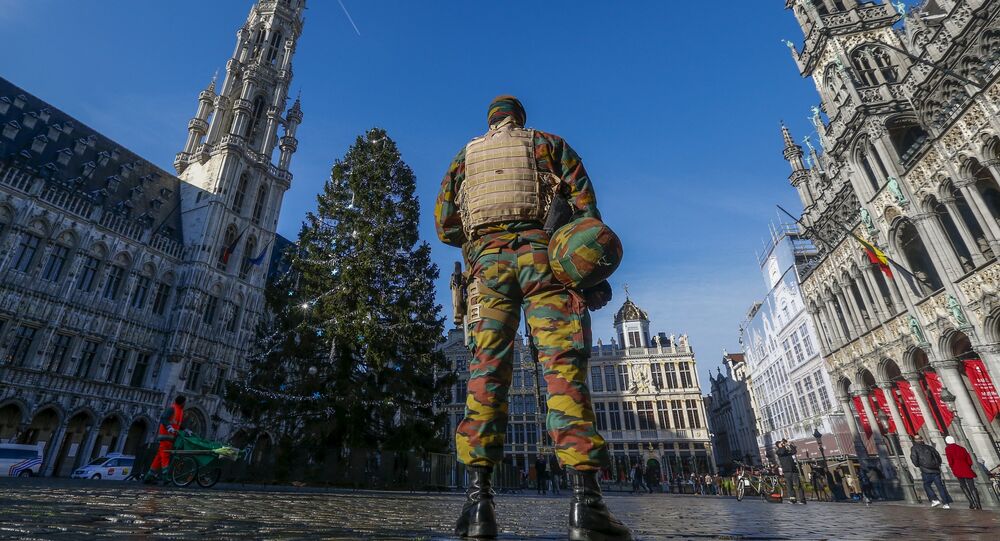 The influx of refugees escaping the havoc created by NATO member-states and their Gulf allies in the Middle East is prompting growing concerns in the EU and drowning Europeans in frustration, Czech-based freelance journalist and analyst Martin Berger notes.

"The Middle Eastern wars will not go away, as well as smugglers that are profiting off people who flee their home countries in hopes of a better life in Europe. While one can safely assume that if the exodus of migrants remains at its current level, the political consequences would be grave for the European Union, especially for German Chancellor Angela Merkel and Germany in general which will witness a gap between itself and its European partners growing deeper still," Berger writes in his recent article for New Eastern Outlook.

© REUTERS / Axel Schmidt
Epic Fail: Majority of Germans Believe Merkel Unable to Resolve Current Refugee Crisis
Journalists point out that the general idea of the EU has lost a lot of attractiveness among Europeans due to the current refugee crisis, an increased terror threat and protracted economic slowdown.

"Europe was pummeled by crises from start to finish in 2015, with terrorist attacks, bankruptcy brinkmanship and an unparalleled refugee influx combining to leave continental unity in tatters by year's end," Griff Witte of The Washington Post emphasizes.

Berger points out that the EU's founding principles have been put in jeopardy: on January 4, 2015 Berlin announced that a common visa policy in the Schengen Area has been endangered by new border control measures introduced by Sweden and Denmark.

EU member states are at pains to stem the increasing tide of refugees. However, at the same time they are undermining one of the union's most important principles — the freedom of movement within the EU — in a bid to ensure security.

"With a growing fear of ISIS [Daesh] and international terrorism more broadly, the Schengen agreement risks being broken in 2016, and as more governments take legal action (as with Slovakia's fight in the European Court of Justice), a divergence of national perspectives will dominate European policy," Ian Bremmer, the president and the founder of Eurasia Group and the group's Chairman Cliff Kupchan write in their Top Risks 2016 prognosis.

© AFP 2019 / EMMANUEL DUNAND
EU Blundering Puts It on Fast Track to Irrelevance, Warns Stratfor Founder
"Closed Europe is first and foremost a Europe that closes itself up to the outside world, and whose countries close themselves up to one another," they warn.

The experts note that a "populist" Eurosceptic trend has emerged in a number of the EU member states, including Denmark, Greece, Hungary, Poland, Spain and Sweden, while in France the National Front is gaining unprecedented levels of support.

"Even in Germany, the far-right Alternative for Germany party will continue to gain in the polls, despite being leaderless," they write, adding that the widely discussed Brexit could become the last straw that breaks the camel's back.

Martin Berger calls attention to the fact that Brussels itself contributed a lot to the current state of affairs, violating such concepts as freedom, human rights and the rule of law, regarded as governing principles of the EU.

"For instance, on September 23, the European Council approved the plan by a majority vote of the European Commission on the resettling of 160,000 refugees, which violates the basic human right of these poor souls, unable to choose a country of future residence," Berger stresses.

© AP Photo / Charles Dharapak
Cologne Changed Everything: Washington's Infatuation With Merkel's Germany Over?
Furthermore, Brussels and Berlin have repeatedly attempted to impose refugee quotas on the EU member states not taking into consideration the nations' will.

Another assault on human liberties, according to Berger was the agreement signed between the EU and Turkey aimed at halting the flow of asylum seekers to the EU. Ankara has received a considerable financial aid from Brussels, while Jordan and Lebanon, the two states most strongly affected by the "exodus" of refugees from Iraq and Syria, have been left out in the cold.

Berger states that besides the 3 billion euro "bribe," Brussels resumed the process of Turkey's accession in the European Union turning a blind eye to Ankara's recent assault on freedom and human rights as well as oil smuggling and colluding with Islamists in Syria and Iraq.

"Thus, the actions that are being taken by Brussels show the obvious: it's only concerned with the interests of its military circles, not people. Therefore, the collapse of Europe, is inevitable. When it will happen is only a matter of time, but is clear that it won't keep us waiting for long," the Czech-based analyst concluded.

Why Poland 'Should Not Try Merkel’s Patience'