The US Department of State refused to comment new sanctions that was imposed on Iran by Washigton, according to the Office of Press Relations.

© AP Photo / Ebrahim Noroozi
Tehran's Nuclear Deal 'Not the End of the Saga'
MOSCOW (Sputnik), Alexander Mosesov — The US Department of State has no comment on the recent accusation of Tehran on the "illegal" nature of the new US sanctions against entities involved in ballistic missile procurement for Iran, the Office of Press Relations told Sputnik on Monday.

Earlier on Monday, Iranian Foreign Ministry's spokesperson Hossein Jaberi Ansari stated the US sanctions have "no legal or moral legitimacy." Moreover, the country's foreign ministry said that Tehran will reply on the sanctions by a more robust approach to the national ballistic missile program and its national defense and security capabilities.

"We have no comment on this," the press relations office said, highlighting the country’s President Barack Obama’s Sunday statement on Iran.

On Sunday, Obama stated that the nuclear agreement reached by Iran and world powers in July proved possibilities of US diplomacy. 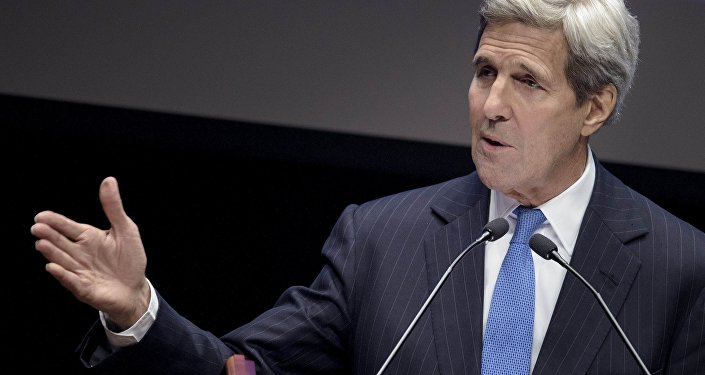 © REUTERS / Brendan Smialowski/Pool
Kerry: US, Iran Settle Tehran’s Frozen $400Mln Claim
On the same day, US Treasury Department sanctioned 11 entities and individuals, including six Iranians and one Chinese citizen, over their involvement in procurement on behalf of Iran’s ballistic missile program.