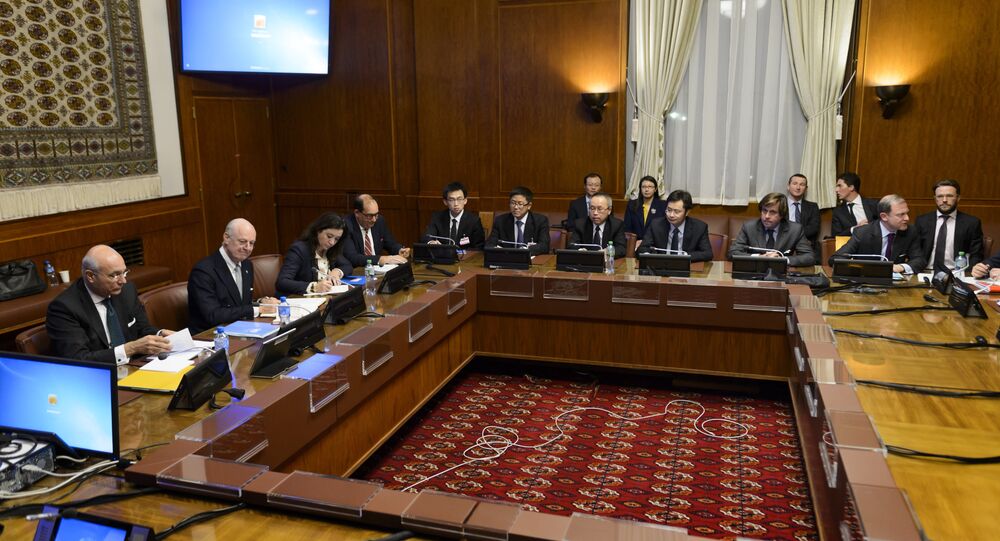 The trilateral meeting between Russian, US and UN diplomats should stop Saudi attempts to influence talks that aim to draft the list of Syrian opposition, one of the leaders of Syria's opposition Popular Front for Change and Liberation told Sputnik Wednesday.

MOSCOW (Sputnik), Svetlana Alexandrova — The three-way meeting, which kicked off earlier on Wednesday, comes in preparation for a major intra-Syrian conference in Geneva on January 25 where opposition will meet with Syrian authorities.

"We expect that Russian, UN and US representatives will…put the gone too far Saudi Arabia in its place as it is trying to exceeded its authorities with respect to the process of forming a list of opposition," Qadri Jamil said.

© AFP 2021 / MAHMUD AL-HALABI
Syrian Government Will Not Talk to Terrorists at Geneva Peace Talks
Wednesday’s meeting in Geneva is expected to take further steps to implement the UN Security Council resolution on the Syrian crisis that calls to list Syrian opposition and terror groups, Jamil continued.

Several groups of Syrian external opposition met in the Saudi capital Riyadh last December despite protests from Damascus. They formed a council that hopes to handpick delegates to represent opposition at the upcoming talks with Syrian authorities.

Jamil accused the opposition that met in Riyadh of trying to monopolize influence and claim a monopoly when forming a united list of opposition.

Damascus said last month it did not recognize the Saudi-backed opposition, who demand that President Bashar Assad step down, and vowed to treat them as terrorists.

Syrian Government Will Not Talk to Terrorists at Geneva Peace Talks