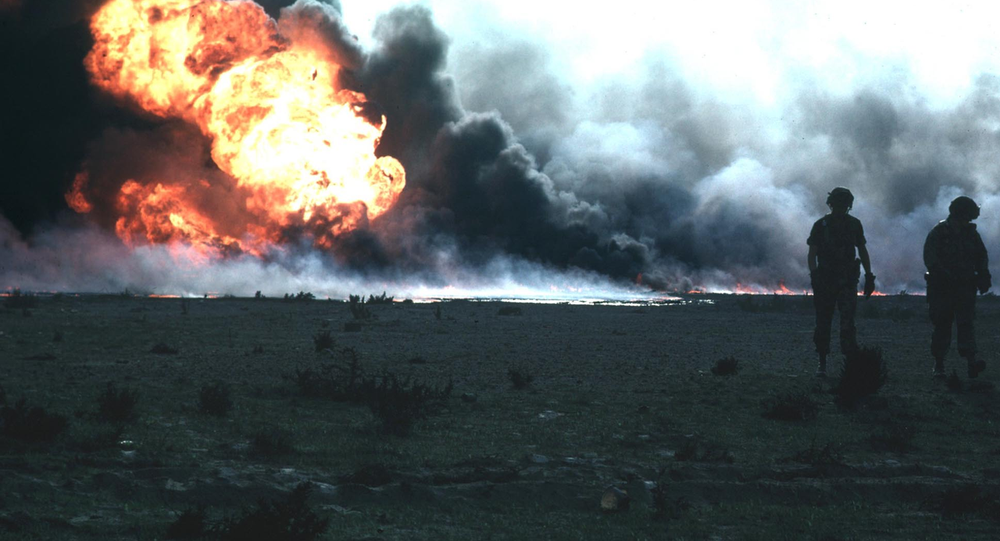 Petropolitics 101: Why Waging Oil Wars is a Bad Idea

The past century has seen countries make fateful military decisions, which revolved around black gold, but history warns that oil wars could be devastating for those who start them, defense analyst Michael Peck wrote for the National Interest.

© AP Photo / Hassan Ammar, File
How Saudi Arabia Wants to Privatize Its Oil But Keep the Profits
Iraq's invasion of Kuwait is often cited as a prime example to support this idea. It is also often considered to be the first oil war the world has ever seen but conflicts over the precious commodity, which runs in the blood vessels of industrial economies, are known to have emerged even before 1990.

In fact, one of the first oil wars took place in the mid-1930s. Known as the Chaco War, the conflict saw Bolivia and Paraguay engaged in a three-year-long struggle for control over the northern Gran Chaco region, believed to be rich in oil. The conflict is said to be the bloodiest Latin American war of the 20th century.

© Flickr / Gage Skidmore
The Worst is Yet to Come? Jim Rogers Says Oil Prices Not Even Close to Rock Bottom
When thinking about World War II, oil does not immediately spring to mind. Yet oil was one of the key factors behind Hitler's strategy for the Soviet Union.

Nazi Germany failed to defeat the USSR in a blitzkrieg offensive in 1941. By 1942, Hitler focused his limited resources on southern Russia to carry out Operation Braunschweig, which was aimed at crashing Soviet forces in Stalingrad and capturing oil fields in the Caucasus.

Germany's forces succeeded in reaching Stalingrad and capturing several oil fields. But the Nazi leadership wanted its Army to pursue both goals simultaneously. As a result, the months-long battle for Stalingrad ended in the destruction of Germany's 6th Army, which was also forced to withdraw from the Soviet oil-rich region. Moreover, the battle also marked a turning point in World War II.

The Empire of Japan decided to attack the US naval base at Pearl Harbor in December 1941 to prevent Washington from ruining Tokyo's plan to capture oil fields in the Dutch East Indies and Southeast Asia. Japan badly needed petroleum since the US, Tokyo's main oil supplier, and Europe introduced an oil embargo earlier that year.

Tokyo succeeded in taking the oil fields under control but was unable to ship oil back home since the US imposed a naval blockade of the islands and bombed Japanese waters.

"Attacking America was supposed to guarantee Japan unlimited oil, but instead it led to the destruction of the empire," Peck noted.

In 1991, Iraq invaded neighboring Kuwait, which at the time had approximately 10 percent of global oil reserves.

The decision to occupy the Arab country is believed to have been sparked by Baghdad's inability to repay the 100-billion-dollar debt incurred during the Iran–Iraq War. Kuwait's oil overproduction and Baghdad's ambition to capture the country's vast oil reserves have also been cited as a reason for the operation.

"The result was 500,000 US troops in Saudi Arabia, the American-led blitzkrieg of Desert Storm and the devastation of Iraqi military power. Iraq had previously been one of the major powers in the Arab world; Saddam Hussein's quest for oil left it broken and isolated," Peck observed.

© AFP 2020 / JEWEL SAMAD
US soldiers from the 1st Battalion, 22nd Regiment of the 4th Infantry Division, ride on a military vehicle as they leave their base on a mission in Tikrit, 180 Kilometers (110 miles) north of Iraqi capital Baghdad, 30 December 2003.

Washington's military engagement in the Middle East has also revolved around petroleum.

"American oil wars have not been about establishing direct control over oil fields nor about liberation or freedom, at least not political freedom for the peoples of the region. Instead, they have primarily been about protecting friendly oil producers," Toby Craig Jones wrote for the Journal of American History in an article titled "America, Oil, and War in the Middle East."