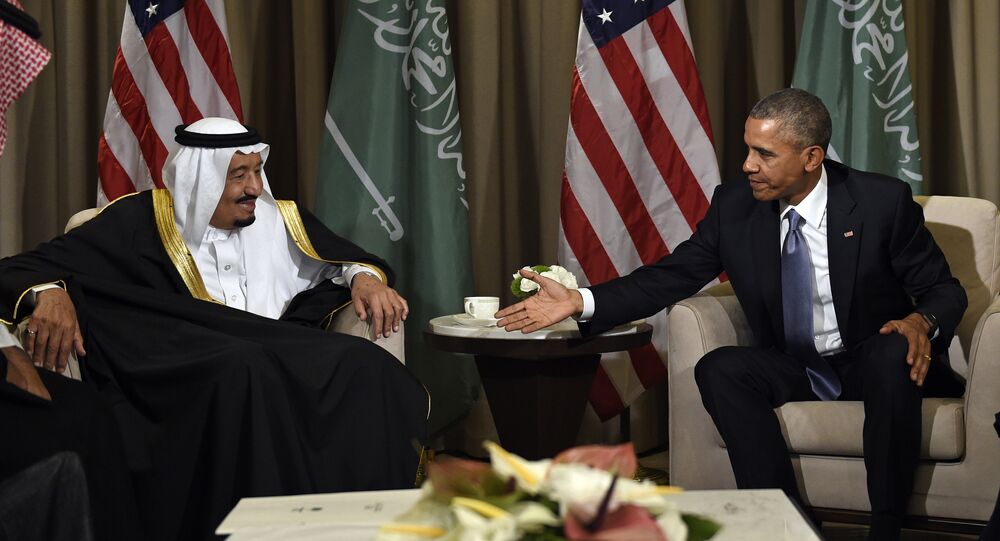 The execution of a prominent Shiite cleric Sheikh Nimr Baqir al-Nimr, which sparked outrage and protests among the Shiites, was a "deliberate provocation" by the House of Saud to achieve three ambitious goals, political commentator Patrick Buchanan asserted.

Riyadh wanted to demonstrate "the new ruthlessness and resolve" of Saudi monarchs, the analyst noted in an opinion piece for Information Clearing House. The oil kingdom also tried to "crystallize, widen and deepen a national-religious divide between Sunni and Shiite, Arab and Persian, Riyadh and Tehran."

In addition, Saudi Arabia sought to undermine the thaw in relations between Iran and the United States, as well as put an end to the Iranian nuclear deal.

© AP Photo / Vahid Salemi
Iranian men take a selfie with a poster of Sheikh Nimr al-Nimr, a prominent opposition Saudi Shiite cleric, who was executed last week by Saudi Arabia.
© AFP 2020 / ATTA KENARE
Leaked Memo Shows Saudis Knew Executions Would Spark Unrest - And They Didn't Care
Broadly speaking, the execution served Saudi national interests, which involve among other things America's backing of any Riyadh's activities, regardless of how ruthless they are.

"Like every regime in the Middle East, the Saudis look out for their own national interests first. And their goals here are to first force us to choose between them and Iran, and then to conscript US power on their side in the coming wars of the Middle East," Buchanan warned.

The incident, which the analyst referred to as a "hubristic blunder," should serve both as a wake-up call and a lesson for the American political leadership since Saudi interests and ambitions rarely coincide with Washington's national interests. Take the global campaign against Daesh, which many nations consider a top foreign policy priority. Apparently, Saudis do not share this sentiment.

"The Saudis went AWOL from the battle against [Daesh] and al-Qaida in Iraq and Syria. Yet they persuaded us to help them crush the Houthi rebels in Yemen, though the Houthis never attacked us and would have exterminated al-Qaida. Now that a Saudi coalition has driven the Houthis back toward their northern basecamp, [Daesh] and al-Qaida have moved into some of the vacated terrain," the analyst explained.

© AP Photo / Evan Vucci
'Recipe for Worldwide Catastrophe': White House Defends Brutal Acts of Its Mideast Allies
The same is true when it comes to oil. Saudi Arabia has been behind the oil price collapse, which is badly affecting the fracking industry in the US.
Saudi Arabia is not the only US ally in the region, whose reckless actions could have led to dire consequences. Turkey's decision to shoot down a Russian bomber in Syrian airspace could have ended in a military confrontation, if Moscow was less rational.

"Had Vladimir Putin chosen to respond militarily against Turkey, a NATO ally, his justified retaliation could have produced demands from Ankara for the United States to come to its defense against Russia," Buchanan observed.

Washington appears to have chosen wrong allies in the Middle East.

"In Syria's civil war – with the army of Bashar Assad battling ISIS and al-Qaida – it is Russia and Iran and even Hezbollah that seem to be more allies of the moment than the Turks, Saudis or Gulf Arabs," the analyst noted.