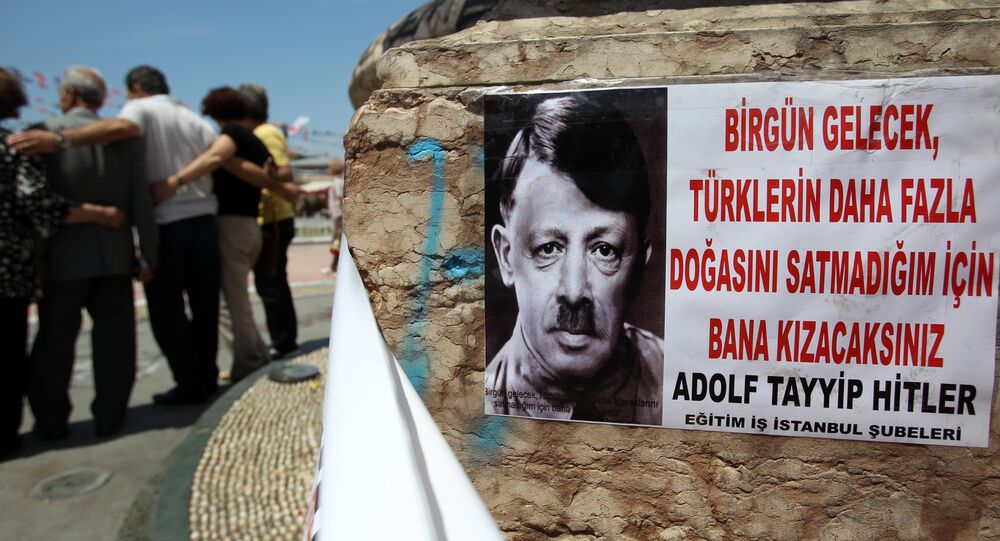 In Hitler's Footsteps? Erdogan's Scandalous Notion By No Means Accidental

The US media is determined to demonize Syria, Russia, Iran, and all the countries that are actively defeating Daesh (Islamic State/ISIL). At the same time the Western press remains mute about Recep Erdogan's colluding with the notorious terrorist group, US political analyst Caleb Maupin notes.

There is something really sinister in Turkish President Erdogan's recent statement in praise of Adolph Hitler, New York-based political analyst Caleb Maupin notes, adding that the Turkish leader's notion was by no means accidental.

"As NATO's Kiev fascists routinely do, Erdogan has praised a man who killed over 27 million people when he invaded the Soviet Union. Much like Hillary Rodham-Clinton, who offensively compared Putin to Hitler, Erdogan is threatening and insulting Russia in the hopes of provoking further tensions," Maupin writes in his recent article for New Eastern Outlook.

© AP Photo / Emrah Gurel
'Turkey’s Expansionistic Interests Coincide With Those of US, EU'
The New York-based analyst points out that like infamous German Fuhrer Adolf Hitler, Recep Tayyip Erdogan is "known to be dictatorial and repressive." While training and arming Islamic extremists the Turkish leader has cracked down on those journalists who had made attempts to shed some light on Erdogan's ties with Daesh.  As a result, some journalists have been detained, and some have died in unclear circumstances.

For instance, reporter Serena Shim, who had exposed the links between Ankara and Daesh, was murdered two days after receiving threats from the Turkish government, according to Maupin.

However, there is nothing hidden that will not be revealed and nothing concealed that will not be known. Daesh fighters have confessed on video that they received military training in Turkey, the political analyst underscores.

"The only reason that Turkey's role in funding and strengthening ISIS [Daesh] is not known is the obedience of the Western mainstream press. The US media is determined to demonize and discredit the Syrian Arab Republic, Russia, Iran, and all the countries that are actively defeating ISIS. While following Wall Street's script, Western analysts and commentators refuse to acknowledge what is very obvious: in Turkey, a pro-western regime and member of NATO is facilitating and actively supporting ISIS terrorism," Maupin narrates.

© AP Photo / Mursel Coban
Ankara's Covert Ops in Syria Annoy Moscow, Repel Washington – Turkish Analyst
The analyst calls attention to the fact that it is not the first time when Western leadership has supported a regime hostile to Russia and its allies.

In 2008 the US-aligned Saakashvili government launched an attack against Russian peacekeepers in South Ossetia. Since 2011 Western leaders have been sponsoring Islamic extremists in the Middle East aiming to balkanize Syria — Russia's primary ally in the region. In 2014 Washington supported an anti-Russian fanatical regime that took power in Kiev and unleashed a war against the Russian-speaking population of eastern Ukraine.

Needless to say, Ankara still enjoys Western support despite that it treacherously shot down the Russian Su-24 in Syrian airspace on November 24, 2015.

"The intention in each of these geopolitical schemes is to draw Russia into a confrontation with NATO. This would, in effect, unleash an all-out fight between the Western financial system and the global axis of resistance. Such a war to secure the power of international bankers by forcibly liquidating their opponents would be disastrous for the human race," Maupin explains.

© Photo : Russian Ministry of Defense
Russian Air Campaign Leaving No Chance for Washington, Ankara to 'Split Syria Up'
The ongoing conflict in the Middle East plays directly in the hands of Wall Street tycoons and their London counterparts, according to the political analyst. Maupin elaborates that Western capitalism cannot compete with the rising bloc of planned economies. The only way to tip the balance in global plutocracy's favor is a military confrontation.

In this light, Recep Erdogan and his backers on Wall Street and in London have more in common with Nazis than they realize, he remarks.

"This determined effort to spread war to the heart of Europe should certainly disturb all progressive-minded human beings, especially those with a historical memory," the analyst emphasizes.