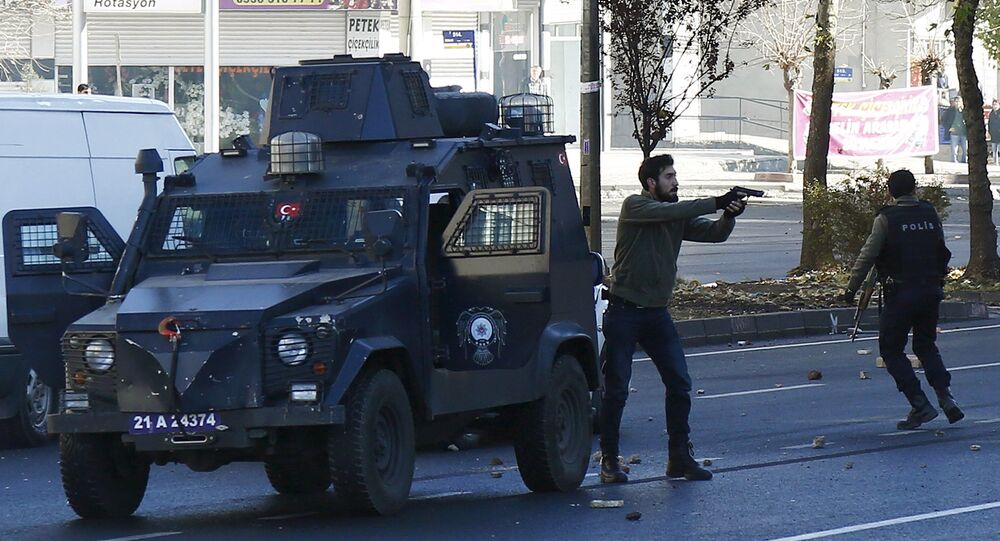 Turkish President Recept Tayyip Erdogan's unquenchable thirst to concentrate political power in his hands, together with his ever-broadening campaign against the Kurds, both at home and in neighboring Syria, threatens to take the country "to the brink of a fully-fledged civil war," warns Pakistani political analyst Salman Rafi Sheikh.

In his latest analysis for the internet-based foreign policy journal New Eastern Outlook, Sheikh, a freelance journalist and political analyst who covers international relations and Pakistani affairs, explained that the present Turkish leadership's intolerance toward the idea of sharing power with the Kurdish minority threatens to become a recipe for disaster.

© AP Photo / Kostas Tsironis
True Colors: The Reason Why Erdogan Admires Hitler’s Government
"If we were to believe Erdogan's up-beat 'anti-terror' rhetoric," the analyst writes, "we might also be also be tempted to believe that Turkey, led by him, has been one of the most important states fighting terrorists since the beginning of the current phase of the conflict in the Middle East – a phase that originally started with the Western-engineered so-called 'Arab Spring'."

Unfortunately, "while the 'spring' has since long become a disastrous 'winter', the spate of violence continues to send political jolts across the entire Mid-Eastern political landscape, pitting states against states as well as non-state actors against states."

"Nowhere is this tussle more evident and crucial," Sheikh argues, "than in the case of the Kurds, who have been one of the most important groups successfully contesting Islamic State's [Daesh's] militant onslaught. The struggle has been greatly successful and the more successful it becomes, the more uneasy the Turkish leadership [becomes]." This, the analyst suggests, "is evident from Erdogan's war against Kurds both inside and outside Turkey."

Moreover, he notes, the Turkish government's attempts to project the Kurds as "politically subversive" not only paves the way for political intolerance, but also "unwittingly push[es] them to start a more vigorous campaign for the protection of their rights."

HDP co-chairman Selahattin Demirtas, Sheikh noted, "said that Turkey's largest ethnic minority had to decide whether to live in autonomy or 'under one man's tyranny'. His call –although a reflection of the political suppression Kurds have been subjected to –was, as could be expected, projected by Turkey's [government] as 'unmistakable' evidence of 'treachery' and 'treason'."

On Saturday, quoted by the Turkish newspaper Today's Zaman, Erdogan suggested that the HDP's leadership should be stripped of their parliamentary immunity for what he called their "constitutional crime" of calling for more autonomy. This followed on earlier, harsher but at the same time murkier threats, with the president suggesting that Demirtas' words amounted to "provocation" and "treason."

What the Turkish media hasn't mentioned, Sheikh notes, is that "Erdogan's war against Kurds has intensified manifold since the beginning of Turkey's direct military intervention in Syria and Iraq. Demirtas' call came amid this very highly intensified war against [the Kurds]. Tension are running high in Turkey's predominantly Kurdish southeast, which has been rocked by curfews imposed on several towns where the security forces have been battling PKK fighters."

© AFP 2020 / DELIL SOULEIMAN
Kurdish-Arab Coalition Advances Against Daesh on Multiple Fronts in Syria
The Turkish-outlawed PKK, it's worth recalling, is affiliated with the Syrian YPG – or People's Protection Units, a military force which has played a decisive role in resisting Daesh and other jihadist terrorists which have taken over much of Syria.

The government's war on the Kurds, Sheikh suggests, looks more and more "like a systematic massacre," with residents of the towns in question facing 24-hour curfews, "food shortages and problems with water and electricity supplies," their homes being damaged by shelling. Over 125 civilians are reported to have been killed since the start of the operation.

"In the mainly Kurdish city of Diyarbakir, police were reported to have fired tear gas and [used] water cannons against protesters who demonstrated against the curfew in the Sur district of the city," which has faced several curfews lasting several days at a time in the past month alone.

Unfortunately, Sheik notes, "Erdogan's silent war against Kurds has been largely ignored by the West, as the Western media continues its high-praise mantra about Erdogan's 'new role' in the war against [Daesh].

© AP Photo / Cagdas Erdogan
On the Brink of Civil War: Civilian Casualties Soar Amid Turkish Assault on Kurdish South
Thus, despite "having won his [party's] parliamentary majority by promising to bring stability to Turkey," Erdogan has only ended up "greatly stepp[ing] up the war against the Kurds, which he started during the summer. Since August 16, there have been 52 open-ended and round-the-clock curfews in 17 provinces and 7 Kurdish cities containing almost 1.3 million people. Numerous cases of civilian deaths as well as indiscriminate operations against the Kurdish population have been reported since that time."

"One of the most important cases reported," the analyst noted, "which is also perhaps the most important instance of political suppression of the Kurds – is that of Cizre city Co-Mayor Leyla Imret's dismissal in September…Deposed by Erdogan's government, despite the fact that she had been elected by 83% of the voters in 2014," she "was not only deposed but also put under detention for warning of the risk of civil war breaking out in Turkey due to the Erdogan regime's brutal policies."

Moreover, "although she was reported to have been released soon after, she has been absent from the scene since at least December 16, 2015, when she put her last message on the internet informing the world about the Turkish army's shelling of her home."

Ultimately, Sheik warns that instead of eliminating support for the PKK and Kurdish nationalism, the Turkish government's efforts have had precisely the opposite effect. This "is so because the Erdogan regime is not, by any stretch of the imagination, ready to politically accommodate the Kurds within Turkey's constitutional framework."

© AFP 2020 / OZAN KOSE
Erdogan 'May Be a Culprit, but He's Washington's Culprit' - Armenian Newspaper
This conflict, the analyst explained, was very much the result of last summer's parliamentary elections, which saw the pro-Kurdish HDP become the third largest party in parliament, turning into "by the far the biggest setback for the AKP since it came to power in 2002," and ruining "Erdogan's plans of changing the constitution to concentrate powers in his presidency."

"It was on this basis," Sheik notes, "that Erdogan, leaning on his old nationalist foes, attempted to whip up nationalism" by starting a virtual civil war "against the Kurds and leftist forces of Turkey. In reality, this was and still is only a means to exclude Kurds from all constitutional processes to pave the way for the Erdogan regime to ease into a new constitutional framework."

In the final analysis, the analyst cautions, the Turkish leadership's "political intolerance is likely to translate into social intolerance, which in turn may literally take Turkey to the brink of a fully-fledged civil war, and bring it in line with Iraq and Syria." Absent an inclusive constitutional framework, continuing attempts "to concentrate more and more powers in [the presidency] would certainly turn out to be a recipe for disaster, rather than stability," Sheik concludes.