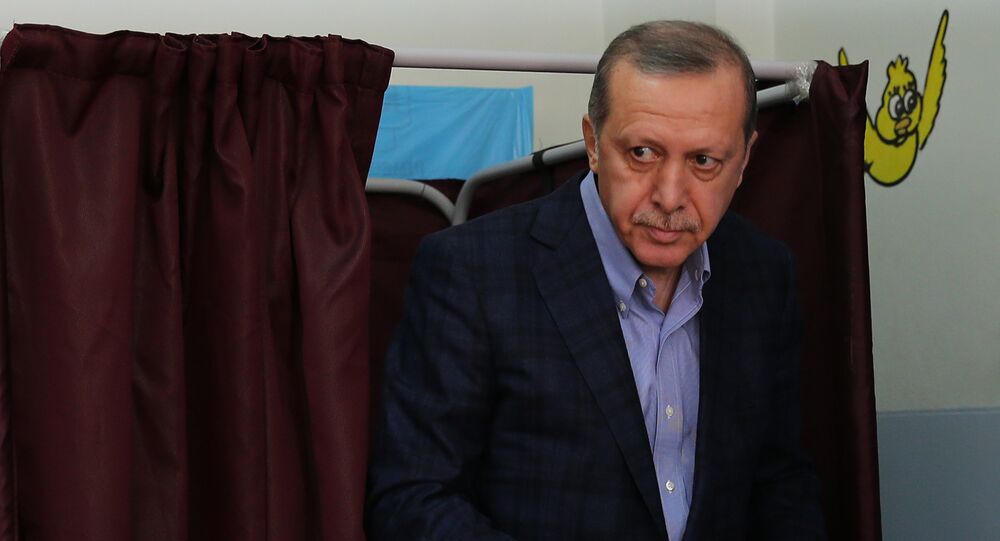 Turkey's President Recep Tayyip Erdogan's remarks on the efficiency of the German presidential system under Adolf Hitler is out of line with historical facts, the Turkish newspaper Hurriyet reported.

© Sputnik / View of Izmir
Losing Ground: 2015 Proved a 'Lost Year' for Turkey
Turkish President Recep Tayyip Erdogan's words about the efficiency of the German presidential system under the leadership of Adolf Hitler hold no water in terms of historical facts, according to columnist Mehmet Y. Yilmaz from the Turkish newspaper Hurriyet.

His comments came after Erdogan said during a press conference that Germany under Hitler was an example of a presidential system able to maintain unitary nature of the state.

"Hitler was appointed prime minister from the parliament by President von Hindenburg. At that time, Germany was ruled by the parliamentary system. Later, Hitler changed the laws. President Erdogan is wrong," Yilmaz said.

After the death of Hindenburg in 1934, the German Cabinet passed a law authorizing the merge of the posts of Chancellor and President with a subsequent liquidation of the latter. Hitler assumed the powers of the head of state and the commander-in chief of Germany.

This is surreal! #Erdogan finds inspiration in #Hitler Germany for his presidential system fantasy. Is this a joke? https://t.co/X4ey0Ytjeq

Yilmaz added that Erdogan was also wrong when explaining the necessity of the presidential system.  Yilmaz quoted Erdogan as saying that "when you look at developed countries, you see that the overwhelming majority have this system."

As for the G-20 countries, only seven states are ruled by presidential systems, including Argentina, Brazil, Mexico, South Korea, the US, Indonesia and South Africa.

"As you can see, except for South Korea and the US, none of the presidential system countries are particularly developed. That is why they are called 'emerging' countries," Yilmaz said.

© AFP 2021 / STR
Against All Odds: Reporter Revealing Erdogan's Crimes Continues Struggle From Turkish Prison
Erdogan has broad powers in Turkey as the country's president. He can appoint ministers, including the prime minister, promulgate laws, ratify international treaties and appoint members of the Constitutional Court.

His presidency is also backed with the support of the country's parliament, controlled by Erdogan's Justice and Development Party, which gained a majority during snap elections on November 1, 2015.