Nearly two years have passed since the Maidan 'revolution of dignity' which toppled the government of Ukrainian President Viktor Yanukovych. But for some odd reason, The Wall Street Journal reports, Kiev still hasn't brought charges against many Yanukovych-era officials. Sputnik speculates as to why this may be.

In less than two months, Ukrainians will mark the two-year anniversary of the Euromaidan protests which culminated, in late February 2014, in the ouster of unpopular but democratically elected president Viktor Yanukovych and the government of his ally, Prime Minister Mykola Azarov.

Nearly two years since the coup, Kiev, according to The Wall Street Journal, continues to struggle with rampant graft, with the public frustrated by the "new government's" inability "to tackle the rampant corruption that fueled the uprising and that keeps Ukraine among the poorest nations in Europe."

© REUTERS / Valentyn Ogirenko
Confidence Game: Corrupt Ukraine 'Edging Ever Closer' to Political Suicide
Moreover, the paper explains, many top ex-officials from the Yanukovych era who have remained in Ukraine haven't seen any criminal charges issued against them. "The European Union banned travel and froze the assets of more than a dozen members of the old regime who stayed, but because Kiev hasn't brought criminal charges against them, EU officials have said the sanctions could be lifted in the spring."

European and American observers are worried. One anonymous Western official told the WSJ, that "within a year all these people will have free access to their assets in the West. After that, nobody would back sanctions again…Many EU officials are fed up with Ukraine."

Furthermore, the paper adds, "accusations of graft by anticorruption activists, journalists and diplomats have [also] followed to the new government," with Prime Minister Arseniy Yatsenyuk becoming a "key lightning rod" for charges of his and his associates' corrupt dealings. 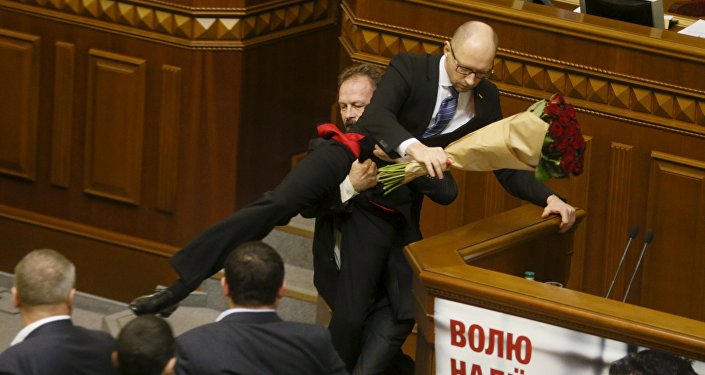 © REUTERS / Valentyn Ogirenko
US Getting Fed Up as Ukrainian Politics 'Descends Into Slapstick'
President Petro Poroshenko too has been accused of sweeping corruption under the rug, particularly over his appointment of Viktor Shokin to the post of Prosecutor General, and the latter's "slow progress on prosecutions of high-level corruption."

Meanwhile, the WSJ notes, Ukrainian officials have "dug in," criticizing US and European diplomats' censure regarding the entrenched corruption. "They said, 'how can he say this?,'" one official told the paper. "We are not some banana republic where you can say whatever you want."

So just why hasn't Poroshenko's prosecutor general begun a real investigation into corruption by Yanukovych-era officials? Perhaps it has something do to with the fact that his political master was one of those officials.

"The entirety of Ukrainian politics summed up in one photo. Not long after it was taken Yanukovych would be forced to run for his life to save himself from Poroshenko."

Yes, although Western officials and media don't seem to want to remember it, Poroshenko, while building up his chocolate empire, also apparently had the time to faithfully serve the public in the governments of both Viktor Yushchenko and his successor, Yanukovych. He was appointed by the latter to the post of Minister of Trade and Economic Development in 2012. The irony was not lost on those in the know.

No Ray of Hope: Ukraine 'Edging Ever Closer' to Political Suicide

US Getting Fed Up as Ukrainian Politics 'Descends Into Slapstick'

Nuland Tries to Bend the Truth Behind Maidan Snipers Case