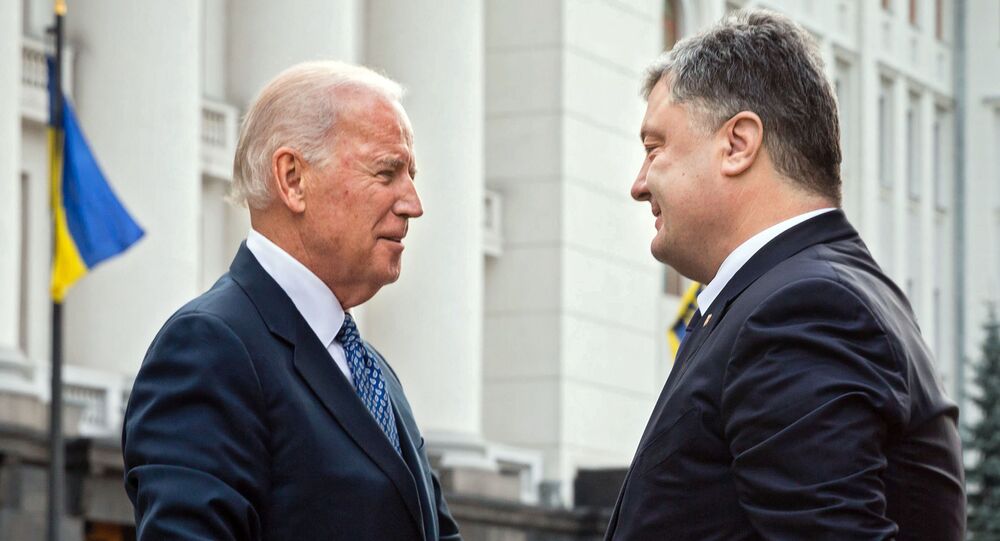 Despite the US and EU’s efforts, the Ukrainian "project" is in danger. If the Ukrainian government falls it will be a deep embarrassment for Washington, Brussels and the IMF which sacrificed relations with Russia to support it.

© Sputnik / Alexandr Maximenko
Anti-Corruption Fight 'Biggest Disappointment’ Among Ukraine Reforms
The political feuding in Ukraine poses a risk not only to the country’s future but also to US President Barack Obama’s reputation, journalists Alessandra Prentice and Pavel Polityuk wrote.

During his recent visit to Kiev, US Vice President Joe Biden said he spends more time speaking to Ukrainian officials than to his own wife. According to statements issued by Biden’s office, since 2014 the Vice President spoke by telephone 40 times with Ukrainian President Petro Poroshenko and 16 times with Prime Minister Arseniy Yatsenyuk. This is in addition to four visits Biden made to Kiev and several meetings with Poroshenko and Yatsenyuk in Washington and Europe.

"But despite these efforts, divisions inside the ruling coalition are growing and many of the reforms are stalled. If the leaders fail, it will be a deep embarrassment for Washington, the EU, and the IMF, which sacrificed relations with Russia to support these people. […] The Obama administration, along with the EU, has invested deeply in making a success of Ukraine's Feb. 2014 revolution," the authors wrote.

According to them, despite the fact that in 2014 US officials and congressmen paid over 100 visits to Ukraine "the project is in danger".

"If that happens, it will be a squandered opportunity for Ukraine to break a 25-year cycle of chaos and corruption and would rob the Obama administration of a rare foreign policy success," the Reuters article read.

Initially, after the change in power, the news from Ukraine was positive. Senior US diplomat Victoria Nuland announced a list of reforms initiated by Kiev, saying that "Ukraine began to forge a new nation on its own terms."

That was a welcome bright spot for an administration that had suffered foreign policy setbacks in Libya, Iraq, Syria and Afghanistan. But in the past few months Ukraine's reform drive has stuttered. […] Many promises have either stalled in parliament or remained on paper only," the authors underscored.

© REUTERS / Valentyn Ogirenko
Ukraine's Yatsenyuk Faces Dismissal Pressure From Protesters, Poroshenko (VIDEO)
In addition, conflicts have broken out between Poroshenko’s allies and Yatsenyuk’s supporters, with some official meetings turning into quarrels. For instance, during one meeting Interior Minister Arsen Avakov threw a glass of water at Odessa Governor Mikheil Saakashvili.

A high-profile Ukrainian official on condition of anonymity told Reuters that during the meeting between Biden and Poroshenko in Kiev the US Vice President warned that the current team has "a last chance to do something" and that the results are important for Washington.

Biden also said that the US’ patience was running out, the article noted. The authors underscored that Yatsenyuk’s resignation has also been considered. This would be a blow to US policy in Ukraine.

"Washington sees Yatsenyuk, a fluent English speaker, as the lynchpin of Ukraine's reform effort. According to a second source close to Poroshenko, Washington will work with any prime minister, as long as a reformist coalition keeps power," the article concluded.

No Ray of Hope: Ukraine 'Edging Ever Closer' to Political Suicide