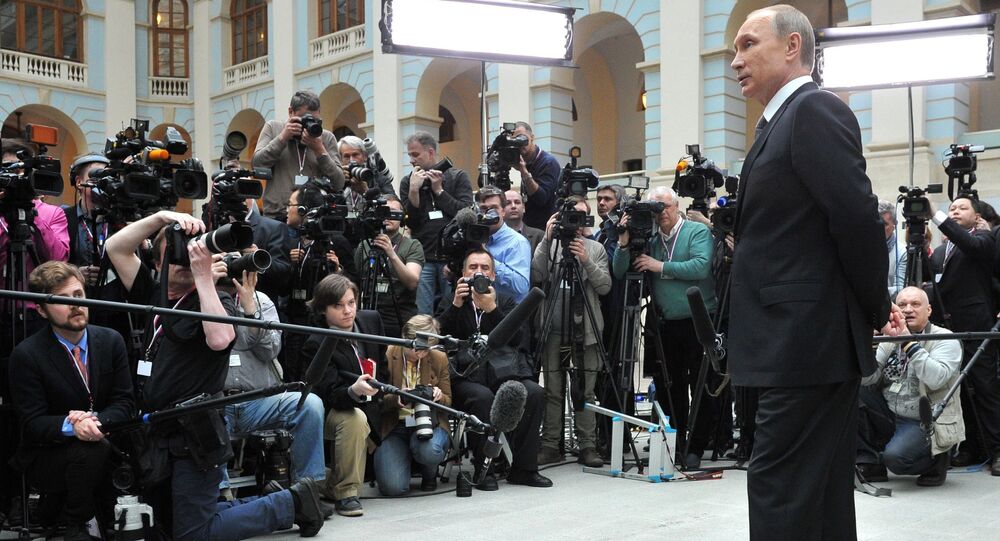 Although Washington claims it welcomes freedom of thought, it obviously does not when it comes to President Vladimir Putin: incredible as it may seem, there is a startling absence of diverse opinions on the Russian leader in the Western press, US political analyst Gilbert Doctorow observes.

There are a large number of American and British scholars and pundits who are remarkably lopsided in their bias against President Vladimir Putin and Russia, US political analyst and historian Gilbert Doctrow notes, adding that their blatant propaganda has recently reached its climax.

"The US establishment writers on Russia are one and all 'presstitutes' and when you put their writings together, back to back, in 40 pages or so as Johnson's Russia List has so kindly done in its Christmas Eve issue, the result is an astounding propaganda barrage… The count was 14 articles or transcripts of video events slamming Russia and Putin to zero articles holding any other view," Doctorow writes in his latest piece for Consortiumnews.com.

"This is entirely in keeping with the ad hominem argumentation that has become the norm in political discussions generally in the US. Joseph Stalin, with his 'no man, no issue' philosophy of governance must be chuckling, wherever he is, over how this view has caught on in what passes today for polite society," the political analyst remarks with heavy irony.

There is something "McCarthy-ite" about the Western mass media stance on Moscow, since it lacks both pragmatism and objectivity. Furthermore, the attempts to draw a comprehensive picture of what is going on in Russia trigger suspicions that those who do not share "mainstream" views on Putin are on the Kremlin's payroll.

In response, Doctorow asks Western pundits to whose flute they are dancing:

"I turn to my political opponents who have a monopoly on Thursday's JRL and ask how much they are benefiting in terms of grants, professional promotions and access to the high and mighty in Washington for publicly supporting the propaganda lines of State Department handouts."

"I wouldn't dream of accusing them of being on the CIA payroll…" the analyst adds.

Host photo agency
Russian Might: Military Events That Made Headlines in 2015
In contrast to what Western mass media say, Vladimir Putin pursues the policy of realpolitik: he recognizes that all countries are in permanent competition for their own advantage, Doctorow notes. In light of this "only alignment of interests can ensure genuine meeting of minds and common action."

The Kremlin's approach toward the Syrian and Ukrainian crises has clearly indicated that Russia is ready to cooperate with its Western partners; however, if the West rejects Moscow's helping hand it continues to work out the solution on its own.

"Vladimir Putin has always followed a foreign policy that had a plan A, of joining NATO or otherwise entering into a shared security platform with the West, and a default position plan B of going it alone," Doctorow emphasizes.

Ahead of The Game: Russia's Far East Wins Amid Tensions With West