Inflammatory statements by Republican presidential front-runner Donald Trump serve to propaganda interests of extremist groups like the Islamic State, leaders of the US Council of Muslim Organizations (USCMO) told Sputnik on Monday.

WASHINGTON (Sputnik), Leandra Bernstein — In recent months, the Republican front-runner has called for a ban on Muslims coming to the United States in response to the deadly Daesh-inspired terrorist attacks in Paris. Other Republicans have called for halting the US resettlement of Islamic refugees from crisis areas in the Middle East, over fears of Daesh infiltration.

"Donald Trump and other candidates are playing right into the hands of ISIS [Islamic State] because they are helping ISIS to divide Americans, to scare Americans," Council on American-Islamic Relations (CAIR) Executive Director and USCMO Board Member Nihad Awad said.

He added that Trump is misusing his marketing and business expertise to sway the US voting public.

"His main product is fear and division, and unfortunately it is selling well," Awad noted.

USCMO Secretary General Oussama Jammal argued that Trump and other politicians who use hate rhetoric against immigrants and Muslims "fall into the trap that basically justifies a group like ISIS to do what they do." 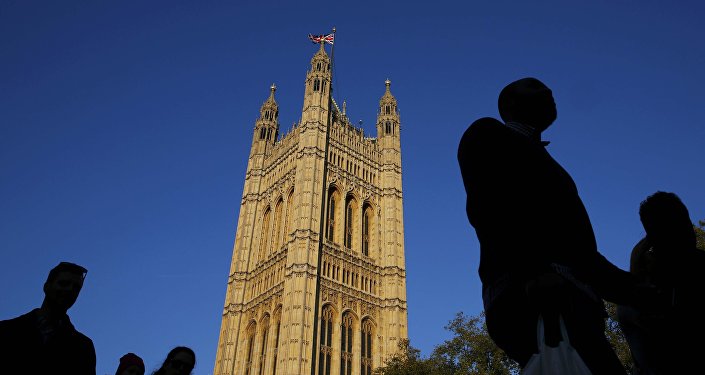 © REUTERS / Stefan Wermuth
Almost Every Third Briton Supports Banning Muslims From Entering UK
Jammal added that Trump and other candidates’ reactions to recent terrorism threats "do not fit with a superpower country…they fit with someone who is out there and is scared."

After the November terrorist attacks in Paris, President Barack Obama warned that anti-Muslim political rhetoric in the United States provided a "potent recruitment tool" for Daesh.

Hundreds of US Islamic leaders concluded a conference in Virginia on Sunday aimed at stopping the recruitment of young US Muslims into extremist groups like ISIL, known as Daesh in Arabic and outlawed in many countries, including Russia.