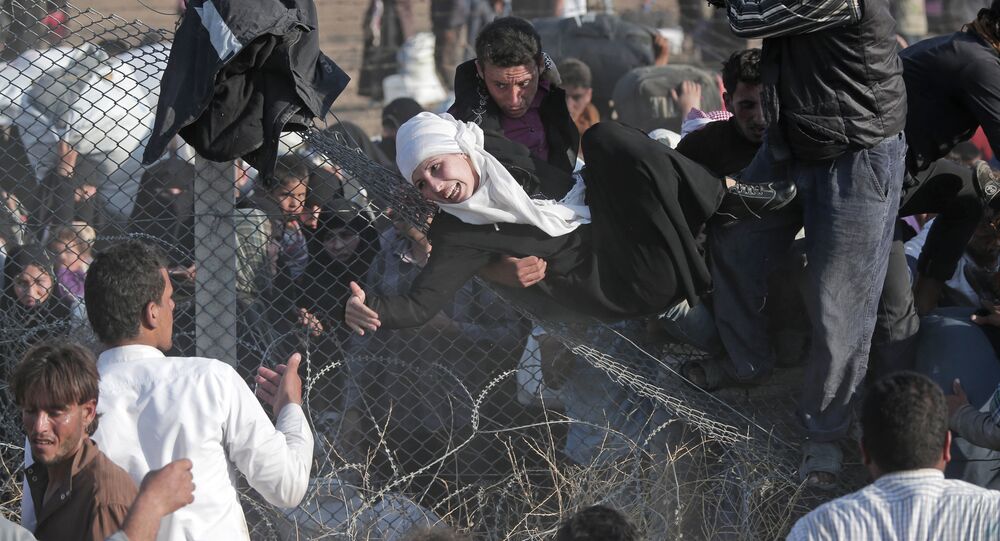 Last month the European Union "bribed" Turkey with three billion euros for stemming the tide of asylum seekers; Brussels is not bothered about how exactly Ankara intends to keep its promise, turning a blind eye to severe human rights violation against refugees in Turkey, Stephen Lendman stresses.

It goes without saying that Turkey is a valued NATO member; Western countries tolerate Ankara's corruption, abuse of power and human rights violation.

"Last month, the EU bribed Turkey with 3 billion euros and promised help to join the bloc in return for accepting refugees from Syria and other war-torn countries its member states don't want. EU leaders called the deal a key way to stem the tide of asylum-seekers. Turkish Prime Minister Ahmet Davutoglu said it marked a new beginning in Ankara/Brussels relations," US author and syndicated columnist Stephen Lendman writes in his article for Global Research.

© AFP 2019 / Philippe Huguen
Welcome to Europe! Soros Adding Fuel to the Fire of EU's Refugee Crisis
Lendman refers to the fact that Turkey remains the main destination for refugees from the Middle East and Central Asia. According to the International Organization of Migration over 700,000 migrants have entered the EU from the country.

Turkey hosts over 2.2 million Syrian asylum seekers as well as around 230,000 desperate migrants from other countries.

Although the terms of the EU deal require Turkey to treat refugees humanely, NGOs are banging the drums over hideous violations of human rights of asylum seekers in Turkey.

"They're [refugees] rounded up in large numbers, bused over 1,000 km to desolate locations best described as concentration camps, grossly mistreated and held incommunicado — many then forcibly deported back from where they came," the US author points out.

Furthermore, many have been pressured to sign some documents in the Turkish language, which refuges do not understand. A lot of migrants are being forcibly deported from Turkey to Syria, Iraq and Afghanistan.

"By engaging Turkey as a gatekeeper for Europe in the refugee crisis, the EU is in danger of ignoring and now encouraging serious human rights violations. EU-Turkey migration-related cooperation should cease until such violations are investigated and ended," AI's Europe and Central Asia director John Dalhuisen noted in an official statement.

Has Brussels already responded to the challenge? Not yet. And there is a suspicion that the problem will remain swept under the carpet.

"EU officials have done nothing to intervene responsibly. They're complicit with Turkey and Washington — their wars causing the human flood in the first place," Lendman concludes.

Saudi Arabia Creates Anti-Terrorist Coalition to Save Face in Mideast