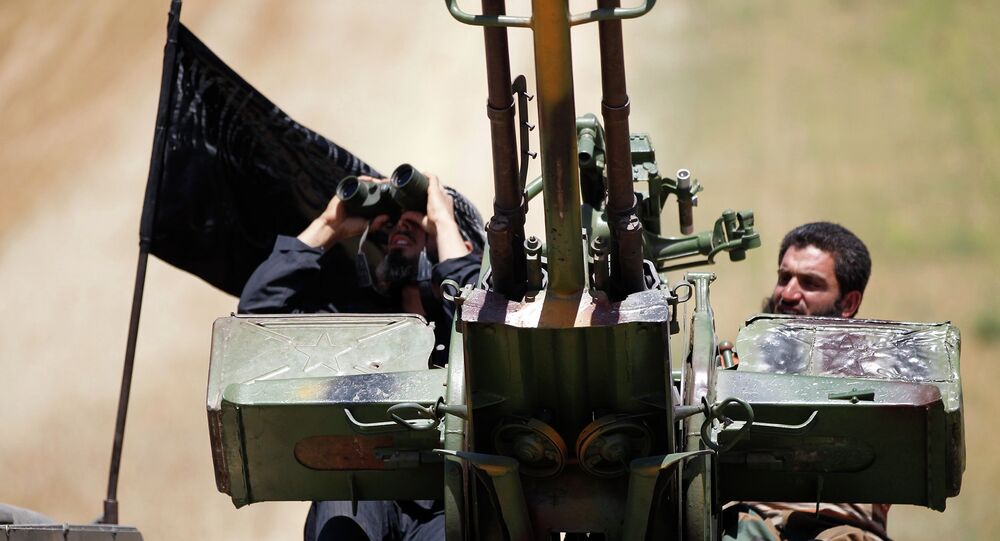 Despite Russia and the US having seemingly come to compromise over Syria in the United Nations, it is unlikely that Islamic extremists backed by Turkey and Saudi Arabia – Washington's closest Middle Eastern allies – will join the Syrian government at the negotiating table, US journalist Gareth Porter stresses.

The peace negotiations between the Syrian government and what has been determined as the "politically acceptable" Syrian opposition were scheduled for January 1, 2016; however, no one on either side believes that the compromise will be reached any time in the foreseeable future, US investigative journalist Gareth Porter notes.

"The notion that negotiations on a ceasefire and political settlement will take place lacks credibility, because the political-military realities on the ground in Syria won't allow it. Those opposition groups that are prepared to contemplate some kind of settlement with the Assad regime do not have the capacity to make such an agreement a reality. And those organizations that have the capacity to end the war against the Damascus regime have no interest in agreeing to anything short of forcible regime change," Porter writes in his article for Consortiumnews.com.

© AP Photo / SANA, File
'I Was Already Packing': Assad 'Thanks' West for 'Allowing' Him to Lead His Own Country
The recent conference at Riyadh which brought together Syrian opposition groups indicated clearly that the first fiddle among the Syrian insurgents is being played by al-Qaeda affiliates and partners.

Incredible as it may seem the most powerful opposition military force is Ahrar al-Sham, an offspring of al-Qaeda's Syrian franchise, al-Nusra Front.

Predictably, at the conference the terrorist group called for "the overthrow of the Assad regime with all its pillars and symbols, and handing them over for a fair trial," Porter remarks.

It is not exactly the game plan, the journalist notes, adding that the infamous Islamic extremist group refused to follow the conference agenda.

Another radical Islamist entity, Jaysh al-Islam (a coalition of almost 60 Salafist armed groups) does not differ much from the terrorists of Ahrar al-Sham.

"The coalition is led by Salafist extremist Zahran Alloush, and has fought alongside Ahrar al-Sham as well as al-Nusra Front. Last April, Alloush travelled to Istanbul, where he met with the leader of Ahrar al-Sham. Like their close allies, moreover, Alloush and his coalition reject the idea of a political settlement with a secular Syrian state authority, with or without Assad," the journalist elaborates.

© Wikipedia / Ulrich Waack
'Surprised and Confused' Daesh Fighters Flee Palmyra Area as Syrian Army Advances
How did it happen that a bunch of radical Islamists became the leading force of the so-called Syrian opposition?

According to Porter, it is all because of US President Obama's decision not to meddle in affairs of his Sunni regional allies, most notably Turkey and Saudi Arabia which trained and funded Islamic extremist in order to topple Bashar al-Assad.

"Obama tolerated Turkish facilitation of foreign fighters and Turkish, Qatari and Saudi funneling of arms to their favorite Islamist groups. The result was that Islamic State, al-Nusra Front, Ahrar al-Sham and Jaysh al-Islam emerged in 2013 and 2014 as the main challengers to the Assad regime," Porter believes.

However, a de-classified 2012 Defense Intelligence Agency's report shows that these Salafist groups, along with the Muslim Brotherhood and al-Qaeda in Iraq, later dubbed "Islamic State" or Daesh orchestrated the process since the very beginning of the Syrian war in 2011 and were the driving forces of the Syrian opposition.

While distancing itself from the al-Qaeda affiliates, Washington turned a blind eye to the fact that NATO member Turkey, along with Qatar and Saudi Arabia were pouring millions of dollars in arms and training for Islamist insurgents like al-Nusra Front and Ahrar al-Sham.

So what does the future have in store for Syria and its peace negotiation.

According to the journalist, the current settlement in Syria is seen by Washington's elites as a sort of a political game. The Obama administration is unlikely to take responsibility for the peace process in Syria, since Obama will leave the Oval Office in a little more than one year.