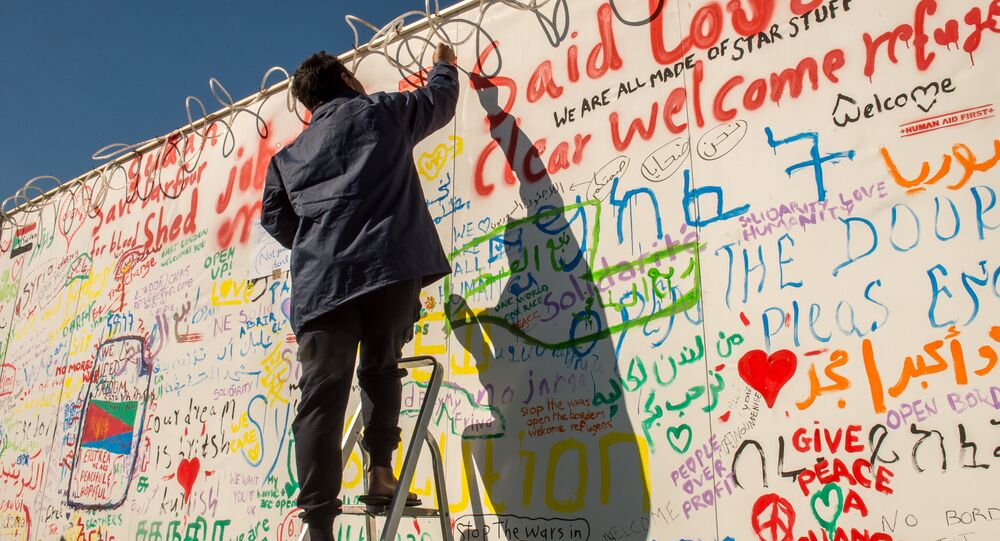 American business magnate George Soros is making every effort to boost the refugee flow to Europe, by encouraging asylum seekers to travel to the continent and urging the European leaders to fork out, F. William Engdahl notes.

"Since John D. Rockefeller was advised to protect his wealth from government taxation by creating a tax-exempt philanthropic foundation in 1913, foundations have been used by American oligarchs to disguise a world of dirty deeds under the cover 'doing good for mankind,' known by the moniker 'philanthropy' for mankind-loving," Engdahl writes in his recent article for New Eastern Outlook.

George Soros, "a prominent international supporter of democratic ideals and causes" is no exception to the rule.

© Sputnik / Maksim Blinov
It's Been Fund: Russia Sends Soros Speculating His Way Out the Door
Under the false pretext of "democracy promotion" the notorious magnate created a network of foundations and instigated a series blatant regime changes in Eastern Europe and the former Soviet republics after the collapse of the USSR.

"Now his foundations are up to their eyeballs in promoting propaganda serving the US-UK war agenda for destroying stability in Syria as they did in Libya three years ago, creating the current EU refugee crisis," Engdahl stresses.

It seems that Soros is making every effort to exacerbate the ongoing refugee crisis in the EU: the infamous philanthropist is urging European leaders to accept about one million of refugees annually and at the same time he is encouraging the desperate asylum seekers to flee to Europe.

Furthermore, Soros cynically recommends the European leaders to fork out and rebuild the asylum system.

"The EU should provide €15,000 ($16,800) per asylum-seeker for each of the first two years to help cover housing, health care, and education costs — and to make accepting refugees more appealing to member states. It can raise these funds by issuing long-term bonds using its largely untapped AAA borrowing capacity…" the magnate states in his September article for Project Syndicate.

© AFP 2021 / TOBIAS SCHWARZ
Storm on the Horizon: Does Soros Want to Inflame Revolution in Europe?
Soros completely ignores the fact that many European powers are currently struggling with domestic economic crises.

"Soros is generous with other peoples' money," Engdahl remarks.

And George Soros has yet more ideas how to spend European taxpayers' money: "he calls on the EU to cough up an added annual commitment to 'frontline countries' (Turkey, Lebanon, Jordan) of at least €8-10 billion annually."

In order to add more fuel to the fire, Soros' network of NGOs in Syria are spreading anti-government propaganda and demonizing Syrian President Bashar al-Assad.

The Soros-funded organizations have also been promoting the implementation of a "No-Fly Zone" in Syria. Similar no-fly zones had been established in Iraq after 1991 and in Libya in 2012 in order to "bomb those countries back to the stone age," the researcher recalls.

One of the key advocates for a US-UK no-fly zone is Avaaz, a "foundation partner" of Soros' Open Society. Another Soros-financed NGO involved in a propaganda war against Bashar al-Assad are Amnesty International and Human Rights Watch, Engdahl points out.

"The Middle East and other wars today including Ukraine are the product of the foreign policy doctrine set out in 1992 by then Defense Assistant Secretary Paul Wolfowitz, the infamous Wolfowitz Doctrine that justifies "pre-emptive" war, free from any oversight from the UN Security Council, against any nation or group of nations which threaten US 'Sole Superpower' domination," the researcher elaborates.

Infamous magnate George Soros — "the hedge fund speculator turned self-proclaimed philanthropist" — is a part of that "pre-emptive war machine," according to Engdahl.

A Curative for Washington's Terror Treachery is Here