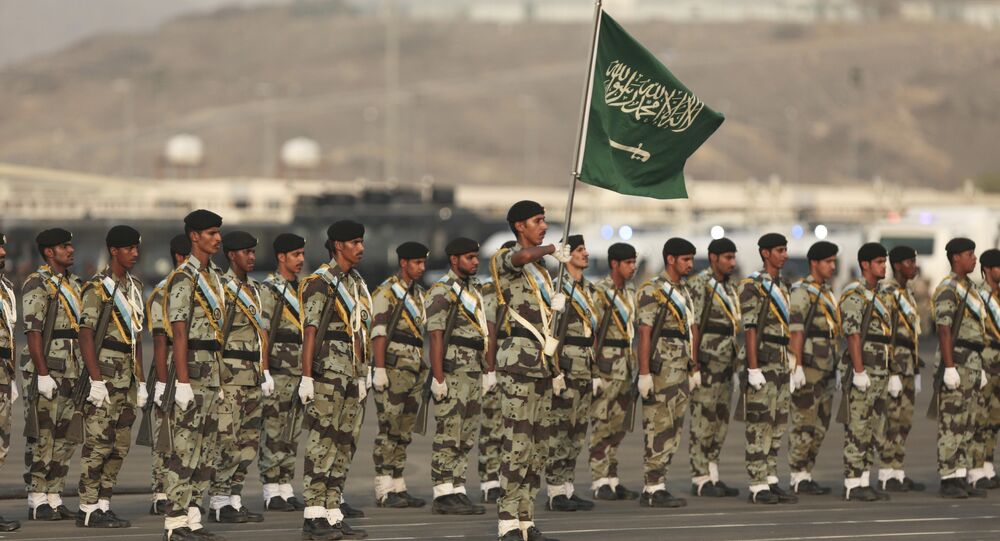 Saudi Arabia has announced the creation of a 34-country 'Islamic coalition against terrorism'. Officially, Moscow says that it will need more detailed information on the coalition's composition and aims. Unofficially, experts are already suggesting that Russia must stay as far away as possible from Riyadh's 'dangerous and disingenuous' endeavor.

© AFP 2021 / FAYEZ NURELDINE
Saudi Arabia Forms Islamic Anti-Terror Military Coalition of 34 Countries - Reports
On Tuesday, the Saudi Press Agency announced the formation of a 34-member 'Islamic coalition against terrorism', featuring a joint operations command center based in Riyadh to coordinate and support military operations. The coalition's aims, according to state media, will be "to protect the Islamic nation from the evils of all terrorist groups and organizations," on "the basis of the right of peoples to self-defense."

Besides Saudi Arabia, the alliance will include countries in the Gulf and the broader Middle East, including Qatar, the UAE, Bahrain, Kuwait and Yemen (where a Saudi-led coalition has been carrying out a military operation against Houthi rebels), as well as the Palestinian National Authority (whose membership in the coalition is under question), Turkey, Jordan, Lebanon, Egypt, and Libya. Nearly two dozen other countries from across Africa and Asia, including Nigeria and Pakistan, are also expected to participate, with another 10 countries, including Indonesia, said to have expressed their support for the initiative.

Iran, along with its allies – Syria and Iraq, have been unceremoniously excluded from the new initiative, despite the fact that the war against Daesh and other jihadist terrorist groups is taking place primarily on Syrian and Iraqi territory.

Commenting on the new coalition's ostensible plans, Saudi Defense Minister Mohammad bin Salman Al Saud said that the Kingdom will fight against any terrorist organizations, including Daesh (ISIL/ISIS), which pose a threat to the Islamic world. Furthermore, according to the minister, the coalition intends to coordinate its operations with major world powers and international organizations.

© Sputnik / Aleksandr Yurev
Line in the Sand: New Saudi Arabian Coalition Won't Just Fight Daesh
For its part, the Kremlin reacted to Riyadh's announcement by saying that it would need more time to analyze both the composition and declared common aims of the coalition.

Commenting on Riyadh's new diplomatic and military initiative for independent Russian newspaper Svobodnaya Pressa, Ivan Konovalov, the director of the Moscow-based Center for the Study of Strategic Trends, voiced his doubts regarding the coalition's intentions and ability to combat terrorism, given that its likely central players have been accused of creating many of the terrorist groups which they now say they will be fighting against.

"The intention of the main sponsors of international terrorism – Qatar, Saudi Arabia and Turkey, to conduct a war against Islamist terrorist groups looks ridiculous, frankly," the analyst suggested.

Riyadh's coalition, according to Konovalov, is in effect "a play to the gallery – an attempt to show the Islamic world that there is unity among their ranks, and with it, that Saudi Arabia is an independent center of power, capable of acting alongside Washington, Brussels, Moscow and Beijing."

"It's clear," the analyst noted, "that this is in fact merely the travail of Riyadh, and that this coalition has no real [military] potential. We can see this perfectly well in the case of Yemen, where a similar mini-coalition, also led by the Saudis, is fighting against the Houthi insurgents. But the latter coalition is showing not only its inability to cope with the enemy, but is also carrying significant losses, and its methods of conducting combat operations, planning and command and control, are just completely inept."

© AFP 2021 / FAYEZ NURELDINE
NGO: World Should Condemn Extremists Within New Saudi Anti-Terror Coalition
Commenting on the warning made last week by Iraqi opposition MP Hanan Fatlawi that Washington could be making plans to deploy up to 100,000 foreign troops to western Iraq, and the possible connections to Riyadh's announcement, Konovalov said that was a possibility.

"I believe that Washington is conducting a serious study on the participation of various forces for a ground operation in Iraq and Syria. That is, they are attempting to construct a strategy leaning in this direction, although this does not mean that such an operation is a shoo-in; it cannot be excluded that Washington will ultimately reject such a plan, finding it unfeasible."

According to the analyst, it remains unclear where the US will be able to find the well-trained, motivated soldiers necessary among its regional allies. "The only country in the Arab world with a battle-worthy army is Syria, and, as we know, over the course of four years of war its capabilities have been significantly degraded."

© AFP 2021 / PASCAL POCHARD-CASABIANCA
All About Russia? 'Saudi Arabia Striving to Regain Initiative in Middle East'
For his part, Leonid Isaev, a Middle East expert at the Higher School of Economics, believes that the Saudis' 'Islamic coalition' was created with the explicit aim of intervening militarily in Iraq and Syria, to counter, in large measure, Russia's successful military campaign in support of the Syrian Army.

The expert told Svobodnaya Pressa that "before Russia launched its military operation in Syria, things were going according to the script for the countries, including Turkey, Qatar, Saudi Arabia, and others, who were sponsoring the anti-Assad fighters; that is, sooner or later, Damascus would be taken, the Ba'athist regime would fall, and then it would be possible to take power into their own hands."

Now, Isaev suggests, "the situation cannot be said to have changed fundamentally in Assad's favor, but rather, is fixed at a certain level. At the same time, it is perfectly clear that if Russian airstrikes continue, the regional powers' ambitions will be put even further on the back burner."

"Therefore," according to the analyst, "the players had to shift to the active phase of confrontation. For this, it was necessary to create their own coalition for action in the region, without the authorization of the UN Security Council, naturally, and they did so."

"Russia," Isaev noted, "has laid out its position: it will not take part in a full-scale military operation on the ground, and will focus only on airstrikes, relying on the Syrian army" as far as ground operations are concerned.

"But the regional powers, as far as I can understand, having created a coalition ostensibly charged with combatting terrorism, and on the pretext of protecting borders, will conduct operations directly on Syrian and Iraqi territory." This, the analyst notes, will allow their actions "to be construed not as an act of aggression…but as operations as part of the anti-terrorist coalition."

"In this way," Isaev warns, the Saudi-led coalition serves as "the beginning of the redistribution of Syrian and Iraqi 'properties' between the key players in the region. It is for this reason that the anti-terrorist coalition was created – it serves as nothing more than a cover to pull Syria and Iraq to pieces."

© AFP 2021 / FAYEZ NURELDINE
Dangerous Scenario: Saudi Anti-Terror Coalition 'May Worsen Sunni-Shia Conflict'
Isaev suggests that the situation in Iraq is now ripe for an artificial escalation, turning the country into the epicenter of the anti-terrorist war. "And, given the fact that Russia is not conducting any military operations in Iraq, it will be interesting to see the reaction from Moscow, and from Baghdad. Will the Iraqis request our assistance, and will we agree to help? After all, fighting on two fronts is much more complex…"

With his interviewer pondering whether direct military intervention by the new Saudi-led coalition might threaten to ignite a full-scale regional war, the analyst admitted that such a threat exists, but noted that a military campaign would harm its initiators first and foremost.

"One must understand," Isaev noted, "that if the regional powers ([the Gulf countries] and the Turks) were to intervene militarily, it will be a fatal decision for them first and foremost; they will get bogged down in this war. After all, the situation in Syria and Iraq is already so bad that no single air or ground operation could achieve anything. The introduction of troops will only aggravate and prolong the conflict."

Moreover, according to the analyst, "if Ankara introduces troops into northern Syria, this will not mean that the Turks will immediately achieve their interests and swallow up a piece of a country, over which they have long-held claims. On the contrary, their invasion will only aggravate the situation of Turkey itself."

Unfortunately, Isaev warns, common sense is unlikely to win out in Riyadh, Ankara and Doha. "Throughout the war…they actively invested in the groups fighting in Syria; the Syrian issue has become their main foreign policy objective. Therefore, they have no other choice; they will look to extract their dividends by any and all means. In this poker game, they are all-in, and cannot be otherwise. Their reaction has shown that they can no longer sit on the sidelines – it's now or never."