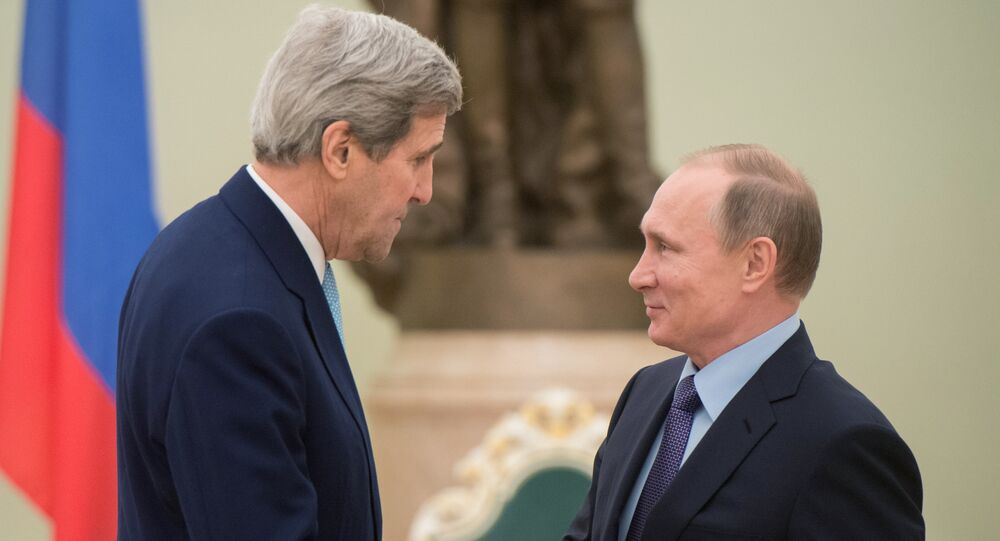 Kerry to Putin: US Grateful to Russia for Cooperation on Syria

US Secretary of State John Kerry told Russia's President Vladimir Putin that Washington is grateful to Moscow for cooperation on Syria and appreciates the seriousness of the commitment in time and thought into the situation.

Earlier in the day, Kerry arrived in Moscow to meet Russian leadership to discuss a range of international issues, including a Syrian civil war, which broke out in 2011.

"With regard to Syria, Vienna-1 ad Vienna-2 were a strong beginning, opening up possibilities, and I think there is no question Foreign Minister [Sergei] Lavrov and I have agreed that together the United States and Russia have an ability to make a significant difference here," Kerry said.

Russia and the United States are jointly searching for the solutions to the most complex crises, Russian President Vladimir Putin said Tuesday.

"You know that we are searching, together with you, for the solutions to the most complex crises," Putin told Kerry.

At the first round of the talks on Syrian settlement held in the Austrian capital of Vienna, international mediators worked out a nine-point plan on ending the Syrian conflict, including a definition of national unity, the need to defeat extremist groups and to provide assistance to refugees.

During the second round of the talks, mediators agreed to uphold the 2012 Geneva communique on finding a political solution to the Syrian conflict and set a six-month timeframe for Syria to form an interim unity government, while stipulating that elections in Syria should be held within 18 months.

New Gym, Canteen for Russian Troops at Syria’s Hmeymim Base