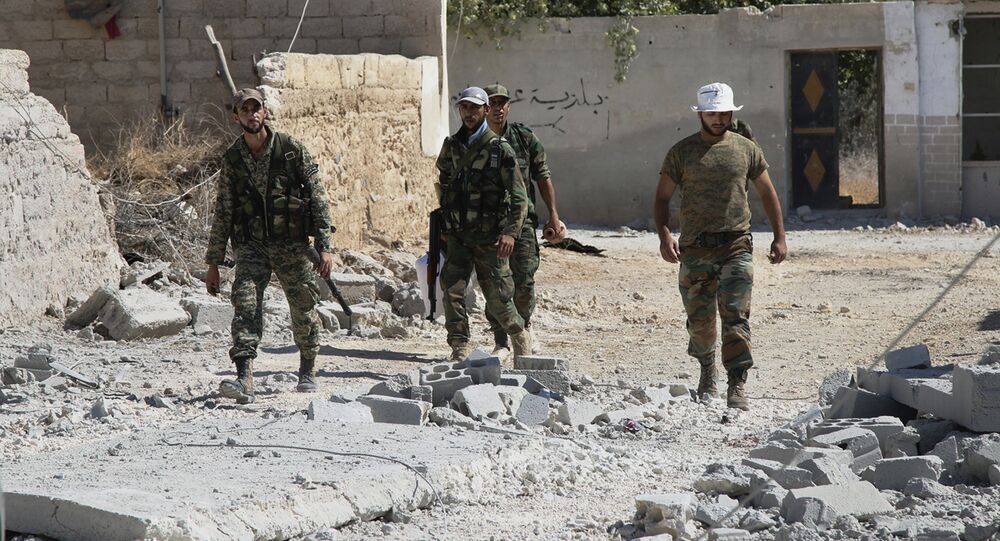 Fresh From Syria? UK-Based SOHR Reporting on 'Situation on the Ground'

Since Russia began its military operation in Syria it immediately came under attack from Western media outlets claiming that the Russian Air Force strikes resulted in the death of hundreds of peaceful civilians; remarkably, these reports were not confirmed by any actual evidence, let alone video or photo images, Scottish geopolitical analyst Steven MacMillan emphasizes.

"One of the most widely cited 'organizations' in the Western media pertaining to the Syrian conflict is the Syrian Observatory for Human Rights (SOHR). As Tony Cartalucci astutely noted back in 2012, in his article: West's Syrian Narrative Based on 'Guy in British Apartment', the Western media portrays the SOHR as a group of impartial and highly skilled professionals who are based in Syria," MacMillan writes in his article for New Eastern Outlook.

Unfortunately for those who trusted the SOHR, reality on the ground proves the opposite.

© Sputnik / Igor Zarembo
F-16 Designer: Turkey 'Set up an Ambush' for Unsuspecting Russian Su-24
MacMillan narrates that the organization was founded in 2006 by the "enigmatic" Rami Abdulrahman (real name Ossama Suleiman). Incredible as it may seem, Abdulrahman aka Suleiman is the only member of the SOHR team.

But that is not all. This one-man band is located in… Coventry, Britain, just some 3,540 kilometers from the Syrian city of Damascus.

Of course, the SOHR has a number of anonymous informants in Syria. However, it is begging the question whether they are reliable and impartial.

"Obviously, the major problem with these unnamed activists is that they are anonymous, meaning the media has absolutely no idea who these people are, or if they even exist. Are some of these activists members of ISIS [Daesh] or Jabhat al-Nusra [al-Nusra Front]? Do they work for MI6 or the CIA? Is the tooth fairy one of his informants? There is no way to verify that Abdulrahman's informants are authentic, reliable or objective," MacMillan notes with heavy irony.

© AP Photo / Khalil Hamra
'Moderate' Islamism? Washington, Brussels Playing With Fire in Syria, Iraq
There is a lot of controversy surrounding the "enigmatic" Abdulrahman himself. Before he fled Syria in 2000, Abdulrahman reportedly served three brief spells in a Syrian jail. Western media outlets claim he was detained for "pro-democracy activism." Well, MacMillan notes, "you can make of that what you wish."

Maybe therefore the SOHR casualty count "for certain periods in the Syrian conflict" differs from the figures presented by specialists from around the world.

Thus far, the SOHR's distorted data regarding civilian casualties of Russia's air campaign in Syria comes as no surprise.

However, what has raised some eyebrows is that the West's reputable news outlets rushed to cite the SOHR information on the issue.

They quoted the SOHR report about 403 killed civilians in Syria "which has zero evidence in it, and provides no additional evidence to support this accusation, but somehow that passes for journalism in the West — what a joke," the Scottish geopolitical analyst stresses.

"This information appears with reference to the Syrian Observatory for Human Rights based in London. As we all understand, it is very 'convenient' to cover and observe what is happening in Syria without leaving London and without the ability to collect information in the field," Zakharova underscored.

For everyone who values real journalism the SOHR is a joke, MacMillan notes. But for the Western mass media it is an important tool in the anti-Russian propaganda campaign.