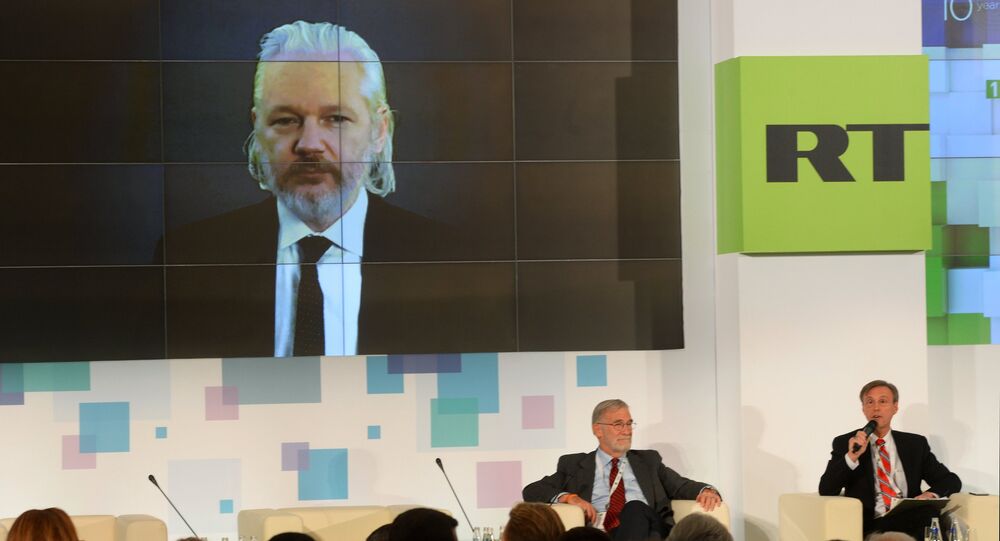 WikiLeaks founder Julian Assange says that Turkey's government may have hatched plans to shoot down a Russian military jet over a month before the attack which downed the Russian Su-24M over Syria late last month took place. According to the activist, the nationalism and political ambitions of President Recep Erdogan's AKP party are to blame.

Speaking at a media conference on security, surveillance and intelligence organized by global news network RT on Thursday, Assange suggested that the attack may have been the result of the Justice and Development Party's electoral ambitions.

Suggesting that Turkey's leadership had a "domestic nationalist imperative" to shoot down the Russian plane, Assange noted that "there is some other information which has arisen – that what occurred was a plan that was set immediately before the [parliamentary] elections [taking place November 1], which Erdogan's party won."

The activist noted that the AKP had had effectively set up "a national imperative to win that election" which included "rules of engagement…such that if there was a technical violation, even for a second, of Turkish airspace, or if it could be suggested that there was, this could be a plan to ensure winning that election, and those rules of engagement were not taken down."

© REUTERS / Dimitris Michalakis
Refugee Crisis Was Designed to 'Strategically Depopulate' Syria – Assange
The activist suggested that for their part, Russian intelligence services should have take better account of the warning signals coming out of Ankara, no matter how jingoistic they may have been.

Pessimistically, Assange noted that given Turkey's perceived interests in Syria, Ankara is likely "to continue to push to have various forms of control of at least northern Syria."

As far as the Daesh terrorists are concerned, Assange is convinced that "we're going to come to a point, in about six months' time, where ISIS is almost completely debilitated as a state [devolving] back to being a guerrilla group."

Once that happens, several powerful regional players will be left in the vacuum, which Assange worries will only result in further conflict. "What are all those forces going to do then? Do you think that they're just going to go home? Of course not. They can just steer 70 kilometers into Damascus if they want. So I think that it's a very dangerous situation."