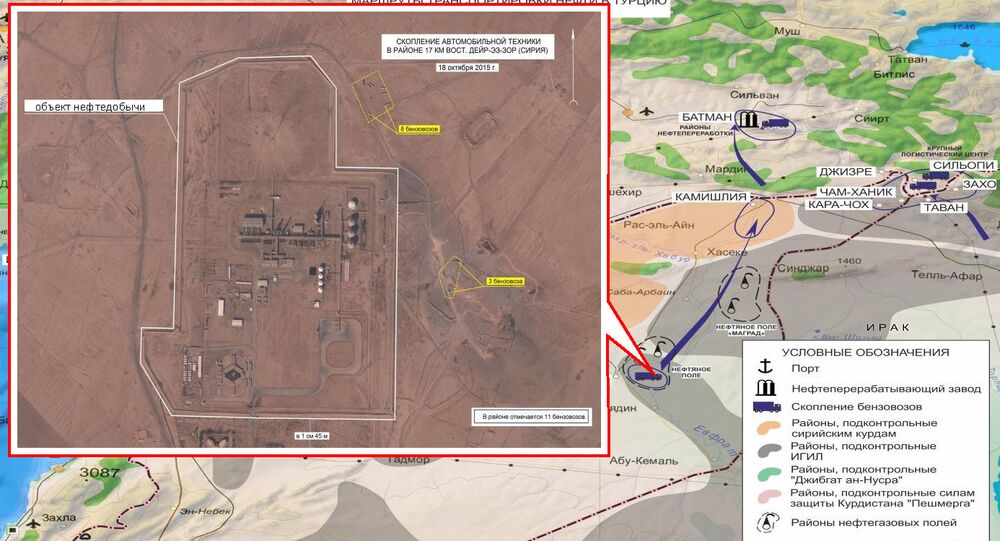 RT correspondent Harry Fear met the staff of Turkish newspaper Birgün, who dared to publish evidence provided by the Russian Defense Ministry proving the existence of an illegal oil trade between militants and Ankara.

© AP Photo / Kevin Frayer
Iraqi Politician Claims ISIL Sells Smuggled Oil $20 a Barrel on Turkish Black Market
Major Turkish media reflect the views of the authorities with only a few opposition newspapers exposing President Recep Tayyip Erdogan and his entourage. Such opposition media are hunted down and prosecuted just like the two journalists of the newspaper Cumhuriyet after they printed a report on the alleged supply of weapons by Turkey to the jihadists in Syria. The two journalists now face 45 years in prison.

“Not in the least surprised. Our colleagues, who were on the spot, saw everything with their own eyes. Even today, if you go to the border you will see self-made oil pipes stretched between Turkish and Syrian villages. These are recorded facts, not rumors and speculation,” columnist Ibrahim Varley told RT.

The newspaper earlier this year published an article, following which President Erdogan personally filed a case against the paper. By publishing the recent evidence, the staff is taking a great risk. “Of course, we are concerned about our destiny, our future. But we had to print the material and we did it,” chief editor Berkant Gultekin said.

In contrast to the opposition newspaper, the pro-government media group office ‘Bugyun’ is highly protected by the state. There are police officers on duty at the entrance and trucks with water cannons parked nearby.

RT contacted the media group requesting an interview and a comment as to why ‘Bugyun’ did not cover the sensational statements of Russia. Although RT could not get any information out of them, Harry Fear met a pro-government columnist for one of the channels. As Erdogan himself, the known journalist denied everything.

© AP Photo / Murat Cetinmuhurdar, Presidential Press Service
Turkey Seeks Safe Zone as Pretext for Syrian Invasion - Syrian NGO
“This ‘black’ propaganda has been carried out for the last three years. We are beginning to wake up and say: In the past, these lands belonged to us; we have the right to take part in their fate. Moreover, our relatives live in those regions. We are concerned as to what is happening to them,” columnist for A Haber, Cemil Barlas, told RT.

According to Cemil Barlas, Turkey has a right over Syrian and Iraqi’s natural resources and he thinks that people living there are not profiting from selling oil as it all goes to the ‘dictator.’

Harry Fear reminded him that according to the released documents Erdogan and his relatives are making a profit from such oil deals with the militants.

To that notion, Barlas said, “But in Turkey since the rule of Erdogan per capita income has tripled. So everyone is getting his share,” exclaimed the columnist.

Such statements demonstrate that as long as the economy is growing, it does not bother anyone that Turkey is stealing oil from its war-ravaged neighbor. The journalists who expose such crimes of its government are arrested and punished, noted RT.

Russia is Right: Turkey Acts Against Common Interests in Fight Against ISIL