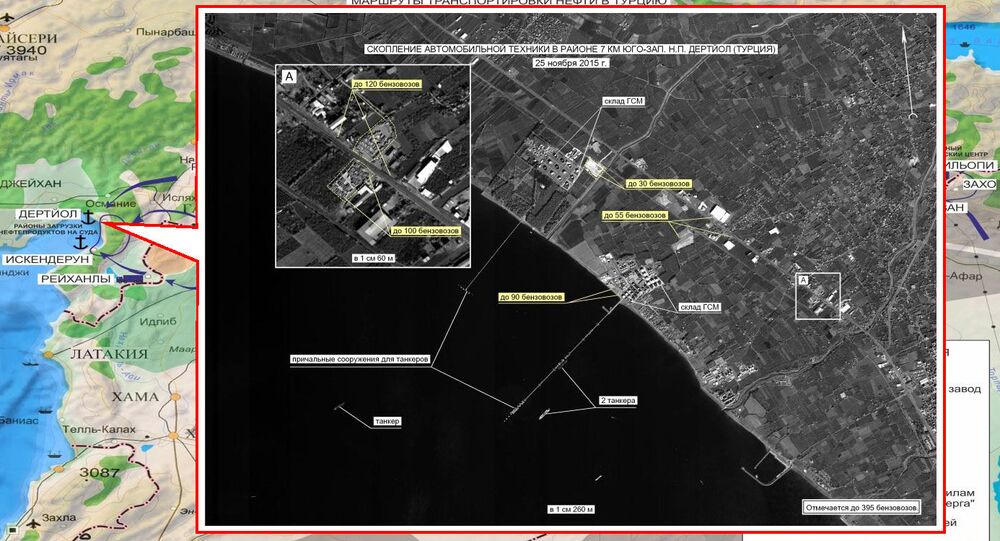 On Wednesday, the Russian Defense Ministry held a briefing detailing the Turkish government's involvement in the trade of Daesh (ISIL) oil. However, instead of starting their own investigations, many Western media outlets have instead attacked Russia for presenting the evidence, suggesting the revelations were 'hostile' and 'confrontational'.

Undoubtedly the most sensational moment in the briefing was Antonov's statement that Turkey's top political leadership, including President Erdogan and his family, are directly involved in the trade of dirty oil.

In the course of his briefing, the deputy defense minister preempted the skeptics by recommending that journalists use the Defense Ministry's findings to continue their own investigations into the shady affair, adding that Turkey should allow journalists "access to the places we showed journalists today."

Despite independent analysts saying that the briefing's disclosures were an "important first step," which will hopefully be followed up with the release of further evidence and an investigation by the UN Security Council, much of the Western media, unfortunately, seems to want to see the fruits of the Russian investigation die on the vine.

The reaction of The Washington Post and The New York Times, amounting to a rehashing of an article by The Associated Press, blamed "Russia's top military brass" for "sharply raising the stakes in Moscow's spat with Ankara" through their "bluntly-worded accusations" against the Turkish president.

Deputy Defense Minister Antonov, AP continued, "didn't provide any specific evidence to back up the claims of personal involvement of Erdogan and his family in the oil trade with the IS." Moreover, the Turkish president, the article recalled, had already vowed to resign if Moscow's accusations were proven to be true.

© AP Photo / Kevin Frayer
Holy Smokes! ISIL Oil Trail Leads to Turkey's Batman
The AP piece cited a spokesman from the US State Department, who "categorically rejected Russia's allegations" (naturally, before really even having a chance to look at them). "We never said oil smuggling from ISIL is not a problem," the spokesman said, but "there is no Turkish government complicity in some operation to buy illegal oil from ISIL. We just don't believe that to be true in any way, shape or form."

For its part, Bloomberg also quickly took to Erdogan's defense, suggesting that the investigation was a sign that Russia was "intensifying its attacks on Turkey," and citing the commentary of a Turkish defense attache who had attended the briefing, who said that "he had expected a military briefing, rather than 'political accusations'."

Foreign Policy went a step further, trotting out a Harvard expert on Russian energy geopolitics who suggested that the allegations were really just a sign that "Putin's regime, [first] with Ukraine and now Syria, has greatly revamped Russian nationalism."

Other US outlets, including USA Today and Voice of America, focused on Washington's response to the Russian briefing, citing the reactions of the White House, the State Department, and US military commanders, who rushed to defend their allies in Ankara. Col. Steve Warren, anti-ISIL coalition spokesman in Baghdad, emphasized that "the Turks" were actually "great partners" in fighting Daesh.

Should the Western media carry out its own investigation of Turkish involvement in Daesh oil smuggling?
Voted: 1
All polls
Across the pond, in the UK, media reaction was generally more of the same. The Guardian headlined their article "Russia Steps Up Hostility Against Turkey With War Room Briefing," sarcastically suggesting that the briefing indicated that "Turkey may have replaced the US as Russia's rhetorical enemy No 1," again instead of focusing on the actual evidence.

The BBC, for its part, also made clear to stick up for the UK's NATO allies, with their article on the briefing headlined "Turkey's Erdogan Says Russia IS Oil Trade Claims are 'Slander'."

The Financial Times again went a step further, suggesting that the revelations are really just another component of the anti-Turkish propaganda which has emerged in the Russian media following the downing of the Russian Su-24. The business newspaper cited the commentary of Ukrainian Interior Ministry advisor Anton Gerashchenko, who suggested that the Russian media's anti-Erdogan campaign was reminiscent of the anti-Kiev campaign it had carried out earlier.

Incidentally, the newspaper forgot to mention that Gerashchenko, a rather smarmy figure in his own right, had earlier called on Ukrainian social media users to publically disclose any information they had on the Russian pilots operating in Syria, in order that terrorists might locate the servicemen and their families and take revenge.

In an interesting contrast to their American and British colleagues, major French and German media outlets seemed less eager to line up behind their Turkish allies. France 24 and Germany's Bild reported on the Russian briefing skeptically, but fairly, saying more evidence was needed.

For its part, Deutsche Welle went so far as to suggest, in its German-language piece, that while additional evidence in Russia's accusation toward the Turkish president "is still pending, one thing is certain: ISIL oil is reaching Turkish territory."

We Know Who Benefits From Oil Smuggling Operations in Turkey - Putin