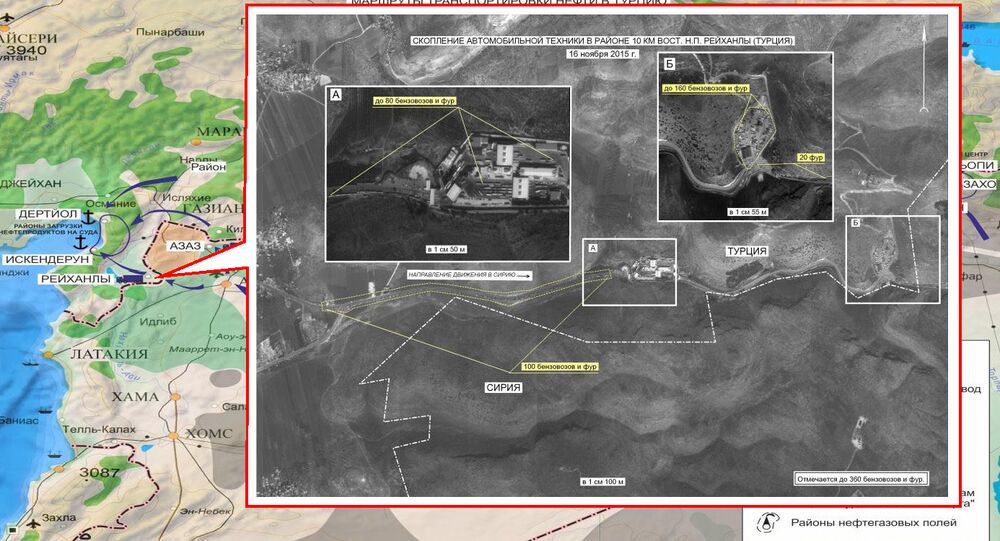 As NATO's Eastern Outpost, Alliance Must Support Turkey 'No Matter What'

Commenting on the implications of Russian military intelligence reports showing Ankara's involvement in the illegal oil trade, geopolitical analyst and Sputnik columnist Pepe Escobar emphasized that with Turkey serving as NATO's easternmost outpost, the US-led alliance is effectively bound to support Ankara's actions no matter what it does.

Speaking to Radio Sputnik on Wednesday, Escobar said that "the problem is that Turkey is the eastern-most arm of NATO, so NATO supports Turkey whatever Turkey does."

Recalling that the issue of Daesh oil being smuggled to Turkey via the so-called "living pipelines" of tanker caravans has been reported on for over a year now, the analyst noted that until last month, the US-led anti-ISIL coalition had nonetheless refrained from bombing ISIL's oil convoys.

Ministry of defence of the Russian Federation
Russia Reveals How Turkey and Daesh Make 'Bloody' Oil Business (PHOTO, VIDEO)
Moreover, Escobar emphasized that while many NATO diplomats and bureaucrats in Brussels were genuinely surprised and appalled by Turkey's destruction of the Russian Su-24 over Syria, the fact remains that at least some of them had knowledge that such an attack was possible.

"The way NATO works is that a NATO member cannot simply shoot down a Russian jet without authorization from the highest echelon," Escobar noted. "The highest echelon means the Pentagon. So the Pentagon would have to approve something like this, or at least pre-approve, because as Russia has demonstrated, the whole operation was highly coordinated."

As for Turkey's "17 seconds" justification, the analyst suggested that this was "completely absurd. This is something that was coordinated hours in advance, and the planning involved weeks. They were waiting for a Russian plane to go to that particular airspace."

This, according to Escobar, effectively implies "the Pentagon telling NATO and NATO telling Turkey 'ok, you have a green light; do whatever you want'. But I'm sure a lot of people inside the bureaucracy in NATO didn't know about it, [were] absolutely appalled, and are now forced to cover for this folly," which practically amounted to a "declaration of war, one which would be fought on European soil."

Escobar believes that ultimately, "what Turkey did" is really "a measure of desperation," with "many factors behind it."

These, according to the analyst, obviously include the oil smuggling operation, with the Russian General Staff demonstrating "absolutely devastating" evidence of Ankara's involvement in the illegal oil trade involving Daesh.

"Number two is the fact that Russia was going after the Turkish fifth column inside Syria, in the form of the Turkmen. There are Turkmen in the north of Latakia province and the west of Idlib province, but there are also Turkmen in the area where Turkey wants to build its so-called safe zone, which in fact is going to be a no-fly zone – this is Erdogan's obsession."

© REUTERS / Sergei Karpukhin
Russian Data on Turkey’s Oil Trade With Daesh Should Trigger Erdogan's Isolation
This buffer area, according to Escobar, "is a kind of safe-zone, refugee camp, mini-concentration camp, no-fly zone area, inside Syrian territory, and controlled by Turkey, with their Turkmen fifth column onsite to supervise the whole thing. It's completely crazy, with the European Union already financing part of this deal with the €3 billion approved by Merkel."

The analyst finds it baffling that "the deal was clenched" such a short period "after the Su-24 was downed. You have a NATO member downing a Russian jet with no credible explanation whatsoever, and three days later they get €3 billion to contain the refugee crisis, which by the way they created in the first place."

Escobar recalled that most of the Syrian refugees flowing in to Europe over the past several months "were released from Turkish holding camps…They were spread out in some camps in Turkey, and then the Turkish government turned around and said 'look, you cannot stay here anymore. We're not going to support you, we're not going to feed you, now go!'"

With Europe caught off guard by the scale of the refugee crisis, the analyst suggested that the Turkish government effectively blackmailed the Old Continent out of the €3 billion, with much of it to be pilfered away by corruption schemes.

According to Escobar, across multiple fronts, Moscow and Ankara are being pushed deeper and deeper into a conflict. In this situation, he suggests, "Erdogan is feeling cornered. He's playing the nationalist card, and he won't apologize."

"Obviously," Escobar suggests, "Russian intelligence, which is very good, doesn't care if he apologizes or not. Russia is acting. 'Ok, you shoot down our jet, here are the serious consequences.'" Furthermore, "if Russia really wants to go hardcore, don't forget that over 60% of Turkey's natural gas comes from Russia. So this is a tremendous amount of pressure which could be applied if Turkey continues to be in an antagonizing mood like they are right now."

© REUTERS / Umit Bektas
Time to Resign? Evidence Mounts of Erdogan's Involvement in Oil Smuggling
Commenting on the Russian Defense Ministry report into the Daesh oil smuggled to Turkey, and President Erdogan's vow that he would resign if his complicity could be proved, the analyst suggested that Russia has already offered "90% of the proof."

Ultimately, Escobar noted, Russia now has "the main picture, but they don't yet have all the details. Once they have the whole thing, and they go to the UN Security Council and they prove it, it will be very hard for someone to say 'no, we don't know'." Alternatively, the analyst suggested, Russia can simply turn to the world press. "What they did today was already a first step."