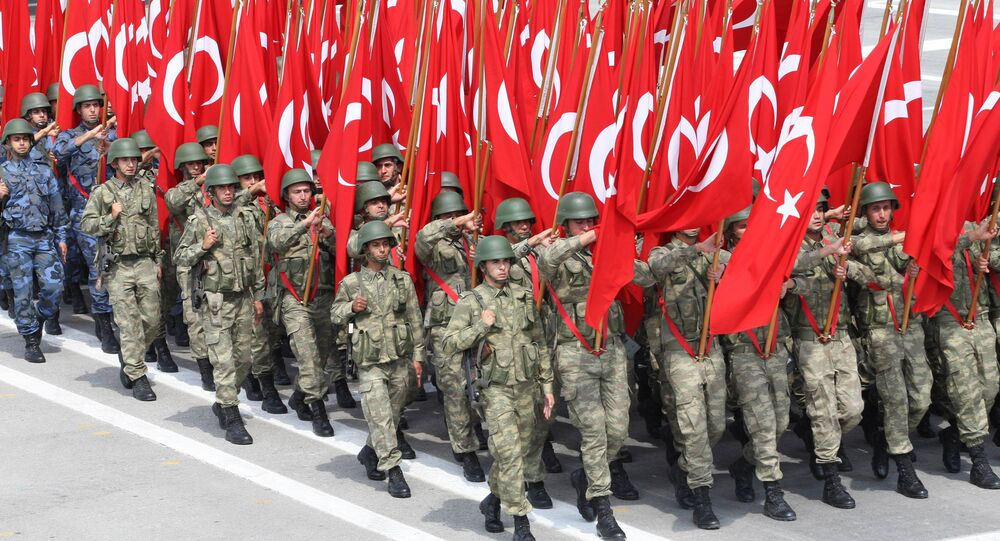 What is taking place today is a battle for global dominance, waged by major Western geopolitical players, and what is at stake here is the future of our planet, an anonymous US analyst who goes by the name 'The Saker' told Sputnik; as for Daesh, it is simply a weapon, he adds.

© Photo : NATO official website
Putin Plays Waiting Game as NATO Presses Self-Destruct Button
During the Paris Climate Change Conference (COP21), Russian President Putin revealed that Moscow has evidence confirming that the Russian Su-24 bomber was shot down by Turkey in order to protect oil deliveries from Daesh (ISIL/ISIS), adding that oil from Daesh-occupied fields has been transferred to Turkey on an industrial scale.

But is it possible that Turkey is selling the stolen oil without Washington's knowledge? Are the Turkish officials who are responsible for oil smuggling acting alone or are they backed by some influential oil market players?

"US intelligence agencies suffer from many weaknesses, but being unable to track money movements is not one of them," The Saker, an anonymous top level American military analyst, told Sputnik in an exclusive interview.

© AP Photo / Hussein Malla
‘Turkey is Part of the Problem Rather Than a Force Fighting Daesh’
"Furthermore, both the USA and Israel have an extensive network for agents in Turkey.  I thus consider it extremely unlikely that anybody in Turkey would be able to move around large sums of money without the US being fully aware of that.  Also, consider that Daesh is a top-priority target for US intelligence agencies and that their immense data collection capabilities are also focused on the Daesh side of the equation," he emphasized.

"Finally," The Saker added, "the illegal sale of oil is a minor element in a much more important battle between the USA and the Russia-Iran-Syria alliance and, thus, the US would never allow it to interfere with its bigger objectives."

The analyst underscored that corruption has long been an integral part of the US "imperial" system.

"Corruption being one key feature of the US Empire, it is normal for the US deep state to allow its local puppets to engage in profitable war profiteering, but only as long as this does not interfere with the global US strategy," he stressed.

Experts call attention to the fact that the shooting down of the Su-24 could have been Turkish President Erdogan's "act of revenge," given the fact that his family has reportedly been involved in Daesh's oil smuggling business. In his recent interview with Radio Sputnik, Middle East analyst Stanislav Tarasov noted that "Erdogan's family is directly involved in the incident," and suggested that "we could soon learn that President Erdogan himself is directly linked to ISIL."

But was the downing of the Su-24 bomber by the Turkish F-16 fighter a "lone wolf" operation or a preplanned action coordinated by NATO and Washington? If so, what goal does NATO/Washington have in mind?

"The downing of the SU-24 was definitely a major and carefully planned ambush operation which involved a large number of Turkish F-16 [being] constantly held on airborne alert positions.  The notion that the Americans did not know about this all along is ridiculous," The Saker elaborated.

© Sputnik / Alexey Nikolsky
Putin: Russia Has Evidence Su-24 Shot Down to Protect Daesh Oil Deliveries
"Make no mistake, this was an act of war by the USA and NATO, but executed in such a manner as to provide the real culprits some degree of plausible deniability.  The hope was to have Russia over-react and trigger a direct confrontation which could be them blamed on Russia.  You have to keep in mind that the Russian force in Syria is a very small one and that it is vulnerable.  Even with 60+ combat aircraft and S-400s, the Russian force is much smaller than the Turkish air force, which has well over 200 F-16s.  The USA is now using this vulnerability to provoke Russia," the analyst told Sputnik.

The Saker noted that the Turks themselves had violated the Syrian and, especially, Greek airspace hundreds of times "and not just once for 17 seconds." In the wake of the incident, Ankara suggested that the alleged intrusion of the Russian Su-24 into Turkish airspace had lasted a mere 17 seconds.

"The very fact that they actually used this "17 seconds" excuse it by itself is a clear provocation, designed to humiliate Russian and trigger an over-reaction.  Thank God Putin and the Kremlin did not take this bait," The Saker underscored.

Interestingly enough, the incident in Syrian airspace had been preceded by an act of sabotage in Ukraine: on November 20, unidentified saboteurs blew up the main power lines in Ukraine leading into Crimea; Crimean Tatar activists blocked access to fallen lines. Given the close ties between Ankara and Crimean Tatars (Turkish Prime Minister Ahmet Davutoglu is reportedly of Crimean Tatar descent himself), the question arises, whether the two action were connected in any way?

"I have no information showing any links, but what is clear is that Turkey is waging its own mini-war of influence against Russia, not only in Crimea, but also in the Caucasus and Central Asia," The Saker told Sputnik, commenting on the issue.

© REUTERS / Kayhan Ozer/Handout via Reuters
Time to Kick Turkey Out of NATO? Ankara Playing Dangerous Games With ISIL
"The Turkish 'deep state' appears to be ruled by a revanchist imperial ideology every bit as lunatic and dangerous as the Wahhabi ideology of Daesh & Co.  Erdogan apparently wants to re-establish some kind of Grand Ottoman Empire v2 and for him Russia is the biggest obstacle. This is why Turkey is so precious for the USA — it is run by delusional maniacs every bit as dangerous as the Nazis in Kiev or the Wahhabi freaks of Daesh. This is what Russia is confronted by today — a war by the Anglo-Zionist Empire waged by means of various hate-filled regional powers which are used by the USA to destabilize Russia and her allies," the analyst underscored.

Remarkably, in 2001, then-modest academic Dr. Ahmet Davutoglu published a book entitled "Strategic Depth." In his book, Davutoglu suggested that Turkey possesses a unique "strategic depth" due to its historical and geographical position. The would-be Turkish prime minister argued that Turkey should simultaneously exercise its influence in the Middle East, the Balkan region, the Caucasus, and Central Asia as well in the Caspian, Mediterranean and Black Sea zones. According to Davutoglu, Turkey should re-establish its role as a global player, not just a regional power. In some sense, Davotoglu viewed the collapse of the Soviet Union as a historic chance for Turkey to expand its influence in the Caucasus region and Central Asia.

Given the fact that ISIL has been created and fuelled by a number of states and private donors, which geopolitical players are resisting Russia's attempts to eradicate terrorism in the region and preserve the sovereignty of Syria? Is Russia confronting a bunch of terrorists fed by Saudi and Qatari sheikhs or some well-organized multi-national organizations?

"As for Daesh, it is simply one 'weapon' used by the [US] Empire to destroy its opponents.  There is no such thing as 'terrorism' by itself, it is always a weapon used by one (or several) state actors," The Saker explained.

"The sheikhs you mention are just pawns in the hands of the 'deep state' which runs the US Anglo-Zionist 'Empire' and they themselves only have a local influence.  Thus, the Saudis or the Qatari are major players in Syria, but already at the Middle-Eastern level they are far less powerful than, say, the Turks or the Israelis.  And while they can act as 'private donors' and sponsors of this or that faction of Daesh/al-Qaeda, they can only do that as long as the Americans tolerate that.  One could say that the local sheikhs are influential or even powerful puppets, but they still remain fundamentally puppets," the US military analyst told Sputnik.

However, he claims, this is only the tip of the iceberg; the situation in general is far more serious.

"What is taking place today is a world war between, on one hand, the so-called 'West' (the US Empire) and what I call the 'Resistance' i.e., Russia, China, the BRICS, the SCO countries, Latin America, etc.  What is at stake here is the future of our planet: it will either be ruled by a single world Hegemon or it will be organized as a multi-polar world.  The events in the Middle East are just one 'front' in this worldwide war, and the war in Syria just one "battle" in the Middle Eastern 'front'," The Saker concluded.